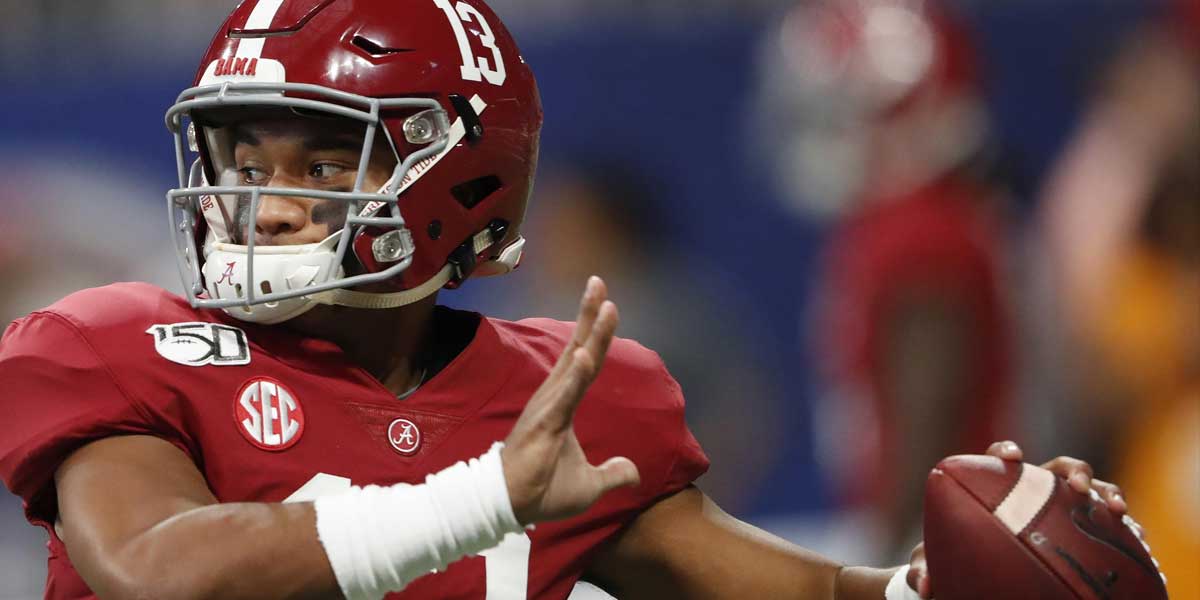 TUSCALOOSA, Ala. - The hip injury that Alabama Crimson Tide quarterback Tua Tagovailoa suffered against the Mississippi State Bulldogs last Saturday didn’t just have an immediate impact on the current landscape of college football, but it also had major implications for NFL teams in the 2020 NFL Draft.

Tagovailoa was seen by many as the top quarterback to enter the draft and even a possible number one overall pick.

However, the hip injury will take him out of the remainder of the 2019 college football season which has NFL scouts, sports bettors, and sportsbooks weary of how high he could be drafted now.

Online sportsbooks now have him favored to be drafted higher than 19th overall in the 2020 NFL Draft at -140 odds.

Earlier this week, Tagovailoa underwent surgery to repair his hip. The team’s orthopedic surgeon, Dr. Lyle Cain, went on to reassure folks that the surgery was a success.

“The procedure went as planned, and he is resting comfortably,” said Cain. “Tua’s prognosis is excellent, and we expect him to make a full recovery. He will return to Tuscaloosa in the next several days to begin his rehab.”

As far as a timeline for when Tagovailoa will be back in action, he is expected to resume athletic activity in three months and will be able to start throwing again by sometime in the spring.

This may cause him to miss a chance to participate in the NFL combine which typically starts at the end of February and lasts until the first week of March.

Will Tua Tagovailoa Be The First QB Taken in the 2020 Draft?

That is another question scouts and sports bettors will have to consider.

The emergence and play of LSU Tigers quarterback Joe Burrow have on him on pace to not only win the Heisman Trophy but also be the first QB taken in the 2020 NFL Draft. So where does that leave Tagovailoa?

This is another question that online sportsbooks are allowing bettors to take action on.

This bet is more of a toss-up as highlighted by the fact that both sides of the line have -120 odds. With Burrow slowly solidifying his place as the first quarterback taken in the Draft, Oregon Ducks quarterback Justin Herbert has a chance to make his mark at second.

The Ducks quarterback will be able to play in more games this season and have and will have more recent film for scouts to study. If he remains healthy, he will also be able to compete in the 2020 NFL Combine which will give NFL teams even more of a chance to study his play.

After Tagovailoa’s season-ending hip surgery, Alabama Crimson Tide head coach Nick Saban when on to praise some of the intangibles that his quarterback brings to the table.

“I mean, he’s just a fabulous person, a really good player, really cares about his team and his teammates and haven’t had on issue or problem with him since he’s been here. He’s worked hard. He’s supported his teammates when he didn’t play. So I can’t say enough good things about him and his family and the impact they’ve had on the program,” said Saban.

Those off the field qualities will also be studied by NFL teams and may weigh into their decision for which QB to take.

What If Tua Tagovailoa Stays Another Year?

There is a chance that Tagovailoa will not enter the 2020 draft and will instead come back to play his senior year at Alabama in order to improve his draft stock.

However, the odds for that happening do not point to him waiting.

While it may seem as though Tagovailoa won’t be drafted first overall in the 2020 NFL draft, it is highly likely that he will still be a first-round pick. Draft experts from CBS Sports currently have Tua being selected 31st overall in the worst-case scenario.

Although, at the end of the day, it comes down to Tagovailoa's decision of whether or not he wants to stay at Alabama. That decision will have to be made by the end of the year. The way Alabama finishes this season and the speed of his recovery may both play a factor in his choice.

Those betting on college football this season know that Alabama still has a shot to make it to the playoffs. They currently sit at number five in the College Football Playoff rankings.