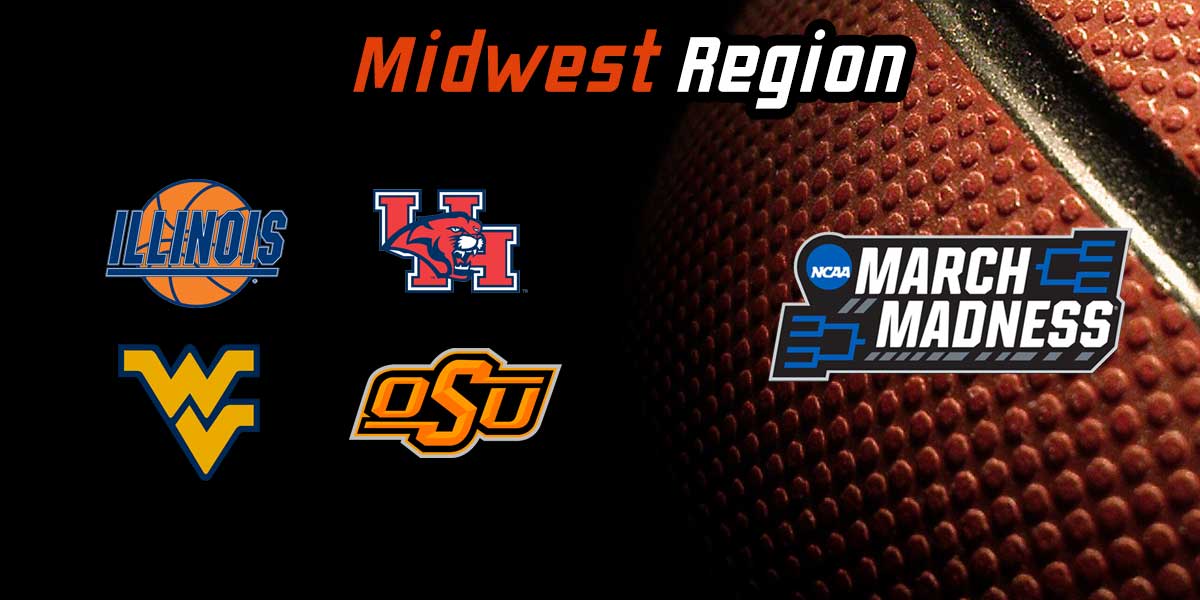 INDIANAPOLIS – The 2021 NCAA Men’s Basketball Tournament is set to officially begin Friday with the Midwest Region hosting some of the first games on the packed 32 game slate. March Madness has certainly been missed as one of the biggest betting events was canceled in 2020 due to the Covid-19 pandemic.

The Midwest Region is spotlighted by the No. 1 seed Illinois Fighting Illini who have the second shortest odds of any team to win the national championship at Bovada.

Outside of Illinois, the Midwest region features a lot of teams that could make a deep run in the tournament.

Betting Odds On Top Five Seeds In The Midwest Region

Whether betting on or just making picks for your bracket, college basketball betting is one of the best ways to win real money and enjoy the tournament.

We here at USAOnlineSportsbooks have compiled a list of betting trends and info to help basketball bettors in making their decisions for which team will come out of the Midwest Region.

The No. 1 seed Illinois Fighting Illini look to begin their quest to capture the program’s first-ever national championship. The Fighting Illini have survived a gauntlet of Big Ten Conference teams en route to claiming the conference title and will face the No. 16 Drexel Dragons in the opening round.

The Illini are by far the superior team as evidenced by them being favored by 22.5-points over Drexel.

Although the Illini were without Ayo Dosunmu for a stretch this season, they didn’t miss a beat as they stomped another No. 1 seed in the Michigan Wolverines by 23 points in Ann Arbor.

When Dosunmu is on the court, the Illini are one of the most talented teams in the country, they’re depth and talent are unmatched in the Midwest Region. On the season, Dosunmu is averaging 20.9 points, 6.2 rebounds, 5.2 assists, and 1.1 steals per game while shooting 40% from the three-point line.

Dosunmu will likely be headed to the NBA Lottery no matter what happens in the tournament but there’s little doubt that he’ll be among the best players in college basketball when it’s all said and done.

Coming out of the Colonial Athletic Association, this is the first time Drexel has made the Tournament since 1996 and they’ll have to play nothing short of a perfect game to beat Illinois.

The Fighting Illini are 6-1 ATS in their last seven games.
The over has hit in six of Illinois’ last nine games.

Drexel has a 5-1 ATS in their last six games.
The total has gone over in eight of Drexel’s last 12 games.

The No. 2 seed Houston Cougars face the No. 15 Cleveland State Vikings to open up their NCAA Tournament play. Houston’s defense has been the team's bread and butter all season as they’ve held opponents to 37.03% shooting which is the lowest in the nation.

The Cougars scoring defense is the second-best in the nation as they’ve surrendered an average of 57.9 points through 27 games. Cleveland State will have their hands full in this game as this is the first time they've made the tournament since 2009.

Expect this to be a low-scoring affair with both defenses setting the tone early.

The Cougars have a 13-4 record ATS in their last 17 games.
The over has hit in eight of Houston’s last 11 games.

The Vikings have an 8-3 record ATS in their last 11 games.
The total has gone over in nine of Cleveland State’s last 12 games.

The No. 3 seed West Virginia Mountaineers will face the No. 14 seed Morehead State Eagles in a game the Mountaineers should be able to win but it won’t be as easy as the 13-point spread implies.

The Morehead State Eagles have played 30 games this season and are only surrendering an average of 63.4 points which has them tied for 26th in the nation. The Eagles defense can limit the Mountaineers' offense but it likely won’t be enough for them to pull off the upset.

The Mountaineers have a 1-4 record ATS in their last five games.
The total has gone over in seven of West Virginia’s last ten games.

The No. 4 seed Oklahoma State Cowboys take on the Atlantic Sun Tournament champions in the Liberty Flames.

The Flames did pull off an upset in the first round of the 2019 NCAA Tournament and could be primed to do so just two years later. The Flames pulling off the upset against the Cowboys won’t be easy.

Oklahoma State has one of the best players in college basketball in Cade Cunningham and beat No. 1 seed Baylor and No. 3 seed West Virginia Mountaineers in the Big 12 Tournament. This is a team that could make a deep run into the tournament.

Cunningham has been one of the most electric freshman guards in all of college basketball this season. The 6’8 guard is averaging 20.2 points, 6.3 rebounds, and 3.6 assists on 45.5% shooting from the field while shooting 41.2% from deep.

Cunningham is already considered a lock to be a top-three pick in the upcoming NBA Draft and a few solid performances in the Tournament could drive his draft stock even higher.

The Cowboys are 8-1 ATS in their last nine games.
The over has hit in seven of Oklahoma State’s last eight games.

Liberty has a 6-2 record ATS in their last eight games.
In the Flames' last five games played in March, the total has gone over in four of the last five games.

The No. 5 seed Tennessee Volunteers will face the No. 12 Oregon State Beavers in what will likely be a close game. The Volunteers have stumbled down the stretch (8-7 SU in their last 15 games) but can get back on track in the opening round of the tournament.

Tennessee blew a 15-point lead in the semifinal game to the No. 2 Seed Alabama Crimson Tide in the SEC Tournament and that’s a major cause for concern.

The Beavers are a team that has won six of its last seven games including the PAC-12 Tournament title. Oregon State is a team that, if they get hot from the three-point line, brackets across the world could be busted.

The total has gone under in four of Tennessee’s last six games.
The Volunteers are 3-2 SU in their last five games.

The Beavers have a 10-1 record ATS on their last 11 games.
The Over has hit in Oregon State’s last six games.

The No. 6 seed San Diego State Aztecs are currently riding a 14-game winning streak coming into the NCAA Tournament where they’ll face the No. 11 Syracuse Orange.

The Aztecs are narrow three-point favorites over the Orange and this game should be one of the closest matchups in the West Region. The Orange seem to always make the NCAA Tournament and that’s due to their head Jim Boeheim.

Syracuse hasn’t had the success the program has become accustomed to but they’re in a good position to pull off an upset on Friday night.

The over has hit in four of Syracuse’s last six games.
The Orange are 4-1 ATS in their last five games.

The No. 7 seed Clemson Tigers take on the No. 10 Rutgers Scarlet Knights in what is the only matchup in the West Region where the lowered seeded team is favored over the higher-seeded team.

Rutgers has made the NCAA Tournament for the first time in 38 years and being favored isn’t a bad way to end the drought. The Scarlet Knights have impressive victories over the No. 1 seed Illinois Fighting Illini, No. 4 seed Purdue Boilermakers, and the Michigan State Spartans, who must win their play-in game to make the tournament.

Clemson has had an up and down season but their wins over No. 2 seed Alabama Crimson Tide, No. 4 seed Purdue Boilermakers, and No. 10 seed Maryland Terrapins make this one of the most intriguing matchups in the West Region.

Clemson has a 2-4 record ATS in their last six games.
The Over has hit in two of the last three games for the Tigers.

The total has gone under in six of Rutgers last nine games.
When playing on a Friday the Scarlet Knights have a 2-7 record ATS.

The No. 8 seed Loyola Chicago Ramblers take on the ACC Tournament champion in the No. 9 seed Georgia Tech Yellow Jackets.

Many bettors will remember Loyola from the 2018 NCAA Tournament when they were an 11 seed that made it to the Final Four. That magic from three years ago could still be running through the veins of Loyola’s team. Sister Jean, the Ramblers chaplain, and superfan was a major motivator for the team in 2018 and she’ll be in Indianapolis for this year’s Tournament after receiving clearance from the NCAA.

🚨 SISTER JEAN IS HEADING TO INDY!

The 101-year-old #MarchMadness legend will be cheering on the Ramblers in person! pic.twitter.com/iqwXhbzKK0

The Yellow Jackets come into this game without the ACC Player of the Year in Moses Wright who will be unavailable for the first round due to a positive Covid-19 test.

The Ramblers have a 9-1 record SU in their last ten games.
The under has hit in 13 of Loyola’s last 18 games.

The Yellow Jackets are 8-1 ATS in their last nine games.
The total has gone over in four of GA Tech's last five games.