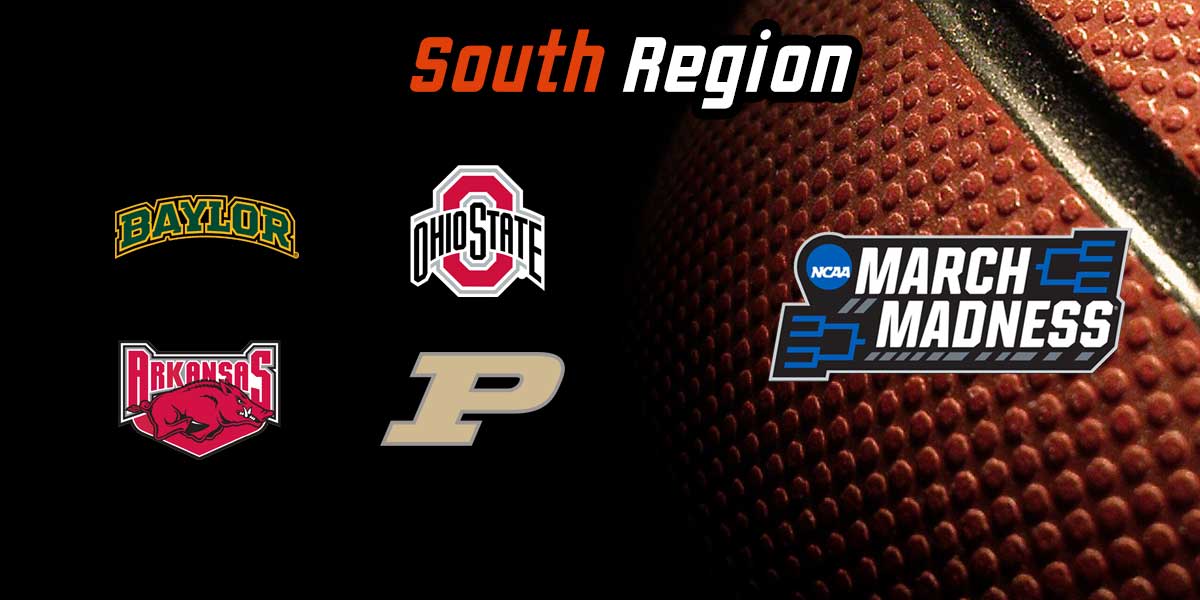 INDIANAPOLIS – The 2021 NCAA Men’s Basketball Tournament is set to The South Region’s No. 1 seed is the Baylor Bears who spent most of the season at the top of the AP Top 25 poll and will look to capture the program’s first-ever national championship.

Below are the betting odds listed at Bovada for the top five seeds in the South Region of the NCAA Tournament bracket as are the teams that could end up making it out of the region to compete for the national championship.

Betting Odds For The Top Five Seeds in the South Region

There are plenty of ways to bet on the NCAA Tournament as well as even more ways to set up your bracket whichever way you chose, we’ve listed betting trends as well as notable matchup information for every game first-round game in the South Region.

Hartford comes out of the America East Conference and this is the first time the program is making an appearance in the NCAA Tournament. Expect Hartford to play a physical style of defense and spread the ball around on offense as they have four players averaging double-digit points per game.

Baylor’s team this season has been powered by Junior guard Jared Butler. Coming into the NCAA Tournament Butler is averaging 17.1 points, 3.3 rebounds, and 4.8 assists on 48.8% shooting from the field and 44% from three. The type of season Butler has had is one of the main reasons why he was named a first-team All-American.

Hartford will have their hands full trying to stop Butler and the potent Bears' offense.

The No. 2 seed Ohio State Buckeyes take on the No. 15 Oral Roberts Golden Eagles in the opening round in what could be one of the first upsets of March Madness. Ohio State came into the Big Ten Tournament having lost four straight games but wins over the fourth-seeded Purdue Boilermakers and one seed Michigan Wolverines have forced many to take the Buckeyes seriously again.

Oral Roberts will present a challenge for the Buckeyes despite being seeded 15th. The Golden Eagles have a high-scoring offense that ranked tenth in the country averaging 81.8 points per game while shooting 39% from the three-point range which has the team tied for eighth in the country.

To put the cherry on top Oral Robert's offense is the top shooting team from the free-throw line in the country at 82.4%.

One of the biggest reasons for Oral Roberts's success this season has been Max Abmas who is the nation's leading scorer putting up 24.2 points in 25 games. The sophomore guard will be the main focus of Ohio State’s defense and if the Buckeyes don’t limit his scoring; they could very well be put out of the tournament in the first round.

Aside from leading the nation in scoring, Abmas is also averaging 3.2 rebounds, and 3.7 assists while shooting 48.4% from the field and 42.1% from the three-point line.

The No. 3 seed Arkansas Razorbacks were on a roll going into the SEC Tournament having won nine straight and will take on a tough team in the No. 14 seed Colgate Raiders. This won’t be an easy win for the Razorbacks as Colgate’s 86.3 points per game is the second-highest in the country.

Despite only playing 15 games, the Raiders are solid on defense as they held their opponents to 40.7% shooting, placing them 42nd in the nation. The Razorbacks will lean on Moses Moody in this game as the freshman is averaging 17 points and 5.8 rebounds while shooting 38% from the three-point line.

If Arkansas is to make it to the next round it will be largely due to Moody’s performance.

The total has gone over in five of the Raiders' last seven games.
Colgate has a 6-2 record ATS in their last eight games.

The No. 4 seed Purdue Boilermakers have made the Sweet 16 in the last three NCAA Tournaments and the journey to extending that streak starts with a matchup against the No. 13 North Texas Mean Green.

North Texas is a team that is led by four seniors all averaging double digits in points per game this season. That type of experience could put Purdue on upset alert on Friday and expect the Mean Green to keep this contest close.

The No. 5 seed Villanova Wildcats come into the NCAA Tournament without one of their best players in Collin Gillespie and face the No. 12 Winthrop Eagles in the opening round.

The Eagles' fast-paced offense could prove to be problematic for a banged-up Villanova team that has lost three of their last four games. Winthrop has only lost one game one the season and this team is deep with versatile athletes. Villanova is favored by -6.5 points, but buyer beware as the Wildcats could be in trouble in the first round.

Chandler Vaudrin has been the most important member of the Eagles squad this season as he’s averaging 12.2 points, 7.2 rebounds, and 6.9 assists all while shooting 48% from the field. Vaudrin is a 6-foot 7-inch point guard and his size mixed with playmaking ability could present numerous problems for Villanova’s defense.

Vaudrin’s three triple-double this season are the in college basketball this season and he’s the type of player that could single-handedly bust your bracket or put some extra money on your bankroll.

The No. 6 seed Texas Tech Red Raiders face the No. 11 Utah State Aggies in what should be an intriguing game. The Aggies are a physical defensive team and that could explain why the Red Raiders are only favored by 4.5-point ATS.

In the last NCAA Tournament two years ago, the Red Raiders finished as the runner up they’re still led by head coach Chris Beard, but they’ve had some close losses to teams that made the tournament including the No. 2 seed Kansas Jayhawks, No. 4 seed Oklahoma State Cowboys, No. 3 seed Texas Longhorns, and No. 3 seed West Virginia Mountaineers.

All of the 10 losses on the Red Raiders record this season were to teams that made the tournament and are at least a No. 4 seed.

The No. 7 seed Florida Gators face the No. 10 seed Virginia Tech Hokies with each team stumbling coming into the NCAA Tournament. The Gators have dropped three of their last four games with two of those losses coming by the hands of the Tennessee Volunteers.

Further highlighting the Gators struggles is that they’ve lost four straight games to teams that made the NCAA Tournament.

The Hokies have shown flashes of greatness this season as they defeated Villanova in a nonconference game. Injuries and Covid-19 opt-outs have prevented the Hokies from reaching their true potential which is why they are a narrow one-point favorite over the higher-seeded Gators.

The No. 8 seed North Carolina Tar Heels seem to be heating up at the right time while the No. 9 seed Wisconsin Badgers have struggled as of late. The Tar Heels are favored over the Badgers, but this will be a close game.

One thing working for North Carolina is that they lead the nation in offensive rebounds per game at 15.9. Their size in the frontcourt led by the 6-foot 11-inch Day’Ron Sharpe and 6-foot 10-inch Armando Bacot can overwhelm Wisconsin.

The Badgers have lost seven of their last 10 games but playing in the Big Ten isn’t easy and a majority of those losses came to teams in the tournament (Illinois, Michigan, & Purdue).

For the underdog Badgers to advance to the next round they’ll need to lean on their trio of seniors in D’Mitrik Trice, Brad Davidson, and Micah Potter.