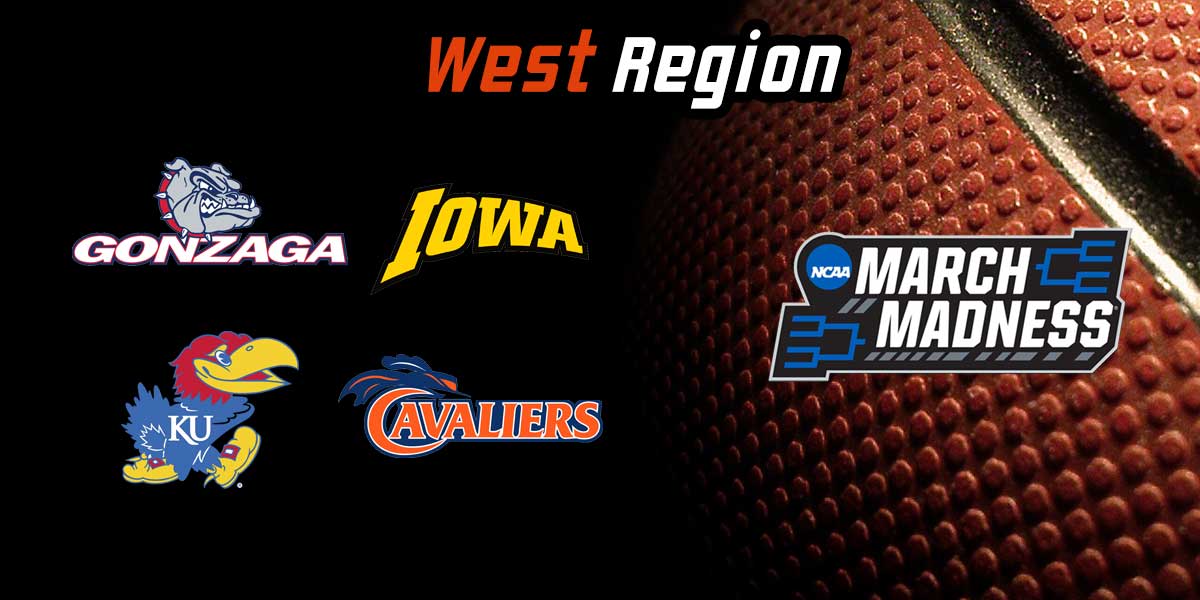 INDIANAPOLIS – The West region of the 2021 NCAA Men’s Basketball Tournament features the only remaining undefeated college basketball team in the Gonzaga Bulldogs who are also favored to win the school’s first-ever national championship with +210 odds at Bovada.

Outside of Gonzaga, the West region is arguably the deepest of the four regions with No. 2 seed Iowa Hawkeyes, No. 3 Kansas Jayhawks, and the defending national champion No. 4 seed Virginia Cavaliers all possessing the talent needed to make it to the title game.

Gonzaga remaining undefeated throughout the NCAA Tournament will be one of the biggest headlines surrounding the West region but when looking closer at the matchups there are intriguing trends to note before setting your bracket or betting on March Madness.

The No. 1 seed Gonzaga Bulldogs await the winner of the play-in game.

The Appalachian State Mountaineers are favored to beat the Norfolk State Spartans by three points ATS. Nonetheless, no matter who Gonzaga faces in the first round. it’s likely they win. When looking at the West region and path to the championship for the Bulldogs, bettors should know that they’ve already beaten the 2-4 seed in the West region (Iowa, Kansas, and Virginia).

All of those games were on neutral sites which will be exactly how the tournament will be played. Those considering betting on Gonzaga to win it all and stay undefeated should feel confident in this team’s ability to deliver on those odds.

If Appalachian State does end up facing Gonzaga in the first round, they’re 8-5 SU as an underdog this season. The Mountaineers are in the Tournament for the first time since 2000 and as the Sun Belt Conference Champion.

Norfolk State isn’t a stranger to pulling off upsets in the NCAA Tournament. The last time the Spartans made the tournament in 2012 they knocked off the No. 2 seed Missouri Tigers.

Luka Garza has put together quite the year for the Hawkeyes as he’s averaged 23.7 points, 8.8 rebounds, and 1.8 assists a game in route to being named an All-American and likely a finalist for the Naismith College Basketball Player of the Year award.

Garza’s 23.7 points per game this season is the third-highest in the nation coming into the NCAA Tournament. Garza has been the best player for the Hawkeyes and the shooters they’ve surrounded him with, make Iowa one of the most dangerous teams in the West region.

For the Hawkeyes to make it past Gonzaga they’ll need Garza to raise his level of play in the Tournament.

The Jayhawks were forced to drop out of the Big 12 Conference Tournament due to positive Covid-19 tests in their program. It seems as though they’ll be ready for their first-round matchup against the No. 14 seeded Eastern Washington Eagles which should be a good temperature check for Kansas.

Eastern Washington’s fast-paced style of play could cause some early problems for Kansas in this game, especially as they start to knock off some rust after their brief layoff.

Kansas is favored to beat the Eagles by 11-points ATS, but this game could be a lot closer than sportsbooks forecast.

The fourth-seeded Virginia Cavaliers were the last team to win the NCAA Tournament and will look to continue their success against the No. 13 seed Ohio Bobcats after having to drop out of the ACC Tournament because of Covid-19.

The Bobcats are a tough team and lost to the Illinois Fighting Illini by just two points earlier this season. The Cavaliers will have their hands full trying to stop an Ohio team that averages 80.9 points per game which is the 17th in the country.

Virginia is on upset alert here as Ohio is on a roll coming into the tournament while the Cavaliers have stumbled.

The fifth-seeded Creighton Bluejays are slight 7.5-point favorites over the twelfth seeded UC Santa Barbara Gauchos in the first round. Creighton has a balanced and deep team with five players averaging double-digits in scoring.

The Gauchos won both the regular season and conference tournament title but their out-of-conference college basketball schedule didn’t challenge the team. This is the first time Creighton has made the NCAA Tournament since 2018 and for UC Santa Barbara this is their first time making the dance since 2011.

Whichever opponent USC faces, they’ll be facing a team that can manufacture offense against just about any team in the country.

The No. 7 Oregon Ducks are 5.5-point favorites over the No. 10 VCU Rams in the first round of the NCAA Tournament. These two teams have only faced each other once in NCAA history with VCU winning that game and covering in 2014.

The Ducks are favored by VCU’s defense could give Oregon issues as the Rams are fifth in the country in blocks. A possible problem the Ducks could pose for the Rams is their shooting from deep. As a team this season, Oregon shot 37.9% from the field which was tied for 22nd in the nation.

VCU sophomore guard Nah’Shon Hyland has been the unquestioned leader of the VCU Rams this season. Hyland was named the Atlantic 10 Conference player of the year for 2021 after averaging 19.5 points, 4.7 rebounds, and 2.1 assists per game.

Hyland’s shooting ability is what has made him one of the most coveted guards in the upcoming NBA Draft. Hyland’s shooting can shift the momentum in a game, and he’ll be the best player on the court when the Ducks and Rams face-off on Saturday night.

The Oklahoma Sooners enter the NCAA Tournament having lost five of their last six games SU and face a Missouri team that is 3-3 over their previous six games. The Sooners-Tigers matchup is an old-fashioned toss-up with neither team displaying an edge.

One interesting thing to note is that Missouri has already defeated some notable teams that are in the NCAA Tournament. These teams are the No. 1 seed Illinois Fighting Illini, No. 2 seed Alabama Crimson Tide, No. 3 seed Arkansas Razorbacks, and the fifth-seeded Tennessee Volunteers.

Despite those victories, the Tiger's recent struggles cannot be overlooked. The Sooners have also beaten some tournament teams this year in No. 2 seed Kansas, No. 3 seed West Virginia, and No. 3 seed Texas.