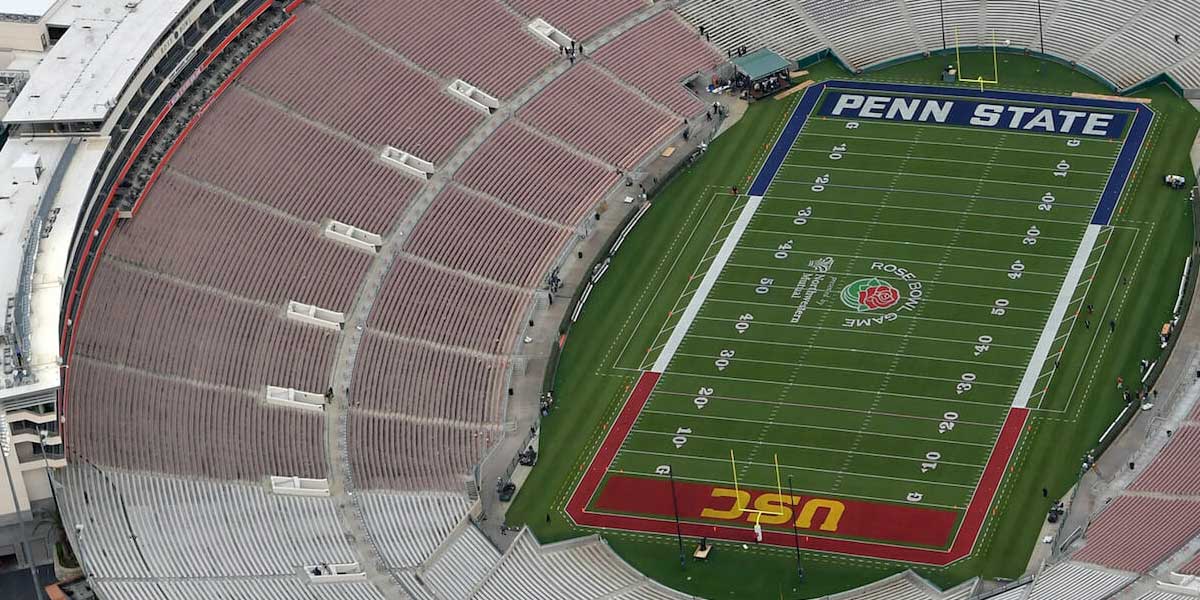 ROSEMONT, Ill. - The Big 10 has announced that it will be playing a conference only schedule during the upcoming college football season.

The ACC and the PAC-12 have been reported to be planning to follow suit as well.

This is a huge story, with a lot of different betting implications to take a look at.

What Does This Mean For The Big 10’s CFB Playoff Chances?

The Big 10 is the only conference so far that has officially announced plans to remove all non-conference games from the schedule.

One burning question that a lot of sports bettors will be asking is how this will affect the teams at the top of the league.

Ohio State is one of the favorites to win the CFB playoff, with +300 odds, only behind Clemson.

However, what happens if they take a loss to Michigan or Penn State this year?

The current plans call for ten conference football games to be played in the Big 10, per Ohio State Athletic Director Gene Smith.

A loss would leave OSU with a 9-1 record under the possible 10-game conference schedule, which looks significantly worse than it would in a year where they got to play some cupcakes.

It seems entirely possible that one conference loss could eliminate a team from contention, especially if that loss comes at the hands of an undefeated team.

This has not been true in past years in some conferences, with both Alabama and LSU reaching the playoffs from the SEC last year.

This is a genuinely interesting consideration, because it applies not only to teams like OSU and Penn State but also applies to their erstwhile opponents.

What happens to teams like Oregon, who had a shot at vaulting into playoff contention by winning their now canceled matchup against Ohio State?

What happens to the cupcake schools, who rely on big payments from the teams they routinely get blown out by in order to keep their athletic programs afloat?

There are a ton of implications to this decision, both in terms of betting odds and the actual results on the field.

Will Clemson Just Roll The ACC?

When it comes to conferences that are ruled by one team, the ACC stands alone. Clemson has been completely dominant in the conference for a while now.

Last year, their closest competition during the regular season came in the form of Auburn, who pushed Clemson hard, losing 14-6.

A scheduled game against Notre Dame in November looked to be Clemson’s toughest test this year, but that game might be in jeopardy now.

The question for sports bettors is whether or not this affects Clemson’s futures odds to win the College Football Playoff.

Right now, Clemson is +225 to win the National Championship, which leads the odds boards at the major online sportsbooks.

In theory, this could amount to a change that more or less locks Clemson into the playoffs, with the best team on their schedule in the ACC likely being Virginia, which is not serious competition for a team like Clemson.

Will beating up on the worst conference be a compelling case to the CFP Selection Committee? What happens if Clemson has a bunch of close wins but nothing really spectacular?

Will the Committee reward them for beating everyone on the schedule, or punish them for not having any tough games?

Overall, the answers to these questions could determine the role that Clemson plays in next season’s College Football Playoffs.

Will The SEC Adopt This Schedule?

The SEC has been fairly quiet about any plans to adopt a schedule like the Big 10 has proposed.

The SEC is home to some of the best teams in the country and has a habit of cannibalizing itself a bit.

The SEC is also generally regarded as the strongest of the Power 5 conferences and has put two teams in the playoffs before.

All of us are aware that teams like Alabama will dominate the cupcake teams on their schedule, but those teams provide several important things to a team like Alabama.

First, they give second-string and third-string players game-time experience, which is useful to programs like Alabama that have five-star recruits sitting on the bench.

Second, they provide something of a week off for the starters, allowing injury-prone players to rest with no fear of losing the game.

Finally, they boost the record of the team that plays them, which looks better to the CFP Selection Committee.

It seems inarguable that an all-conference game SEC schedule would be one of the hardest schedules in the nation.

Going up against teams like LSU, Alabama, Georgia and Auburn is a daunting task at the best of times, but now there might not be weeks off.

This could have the effect of depressing the betting odds of teams like Texas A&M, the teams in the second or third tier of the SEC.

Overall, there are certainly a lot of questions for college football bettors to consider.

That is, if the season happens at all.