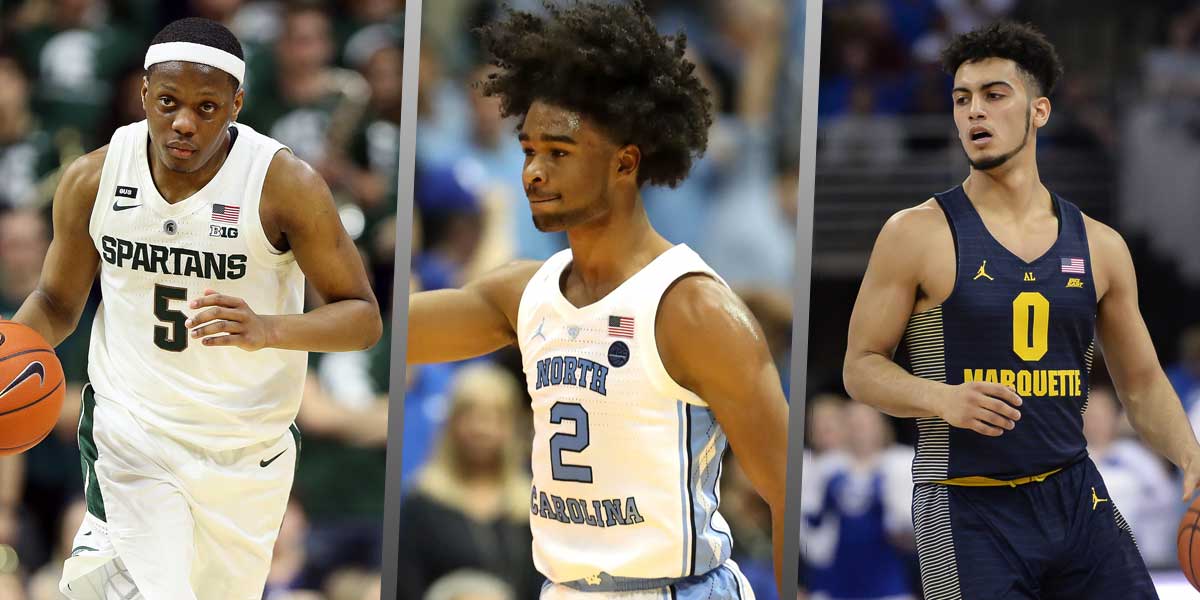 CHAPEL HILL, N.C. – The NCAA Men’s Basketball season is underway, and the early action has provided a variety of upsets across the nation. During the first four games of the season, a No. 1 overall team has already been upset - thus throwing the rankings into madness. However, there have been some elite performances early on as players are already making their case for Naismith College Player of the Year award.

The players who have stuck out as potential NCAAM POTY candidates are Cassius Winston, Cole Anthony, and Markus Howard. With these players being vital for their teams and guiding them to early wins, they’re likely to be in the conversation for the annual award all season long.

Winston was the preseason favorite to win the Player of the Year award and he’ll have to keep being the go-to go guy for the Michigan State Spartans if he’s going to remain among the favorite for this award. Through three games for the Spartans, the senior guard is averaging 19.7 points and 6.3 assists. He still has the shortest odds among any player with USA sportsbooks listing him at +150 odds to win the award. Michigan State has started the season 2-1 with their latest victory coming over the No. 12 Seton Hall Pirates.

He was one of the key pieces to Michigan State’s Final Four run last year and will be vital for a Spartan’s team that is the betting favorite to win the NCAA Championship this year at +650 odds. With the Spartans starting the season without Josh Langford more of the offensive load will be placed on Winston. If he can keep Michigan State in the top-5 despite the injuries to his team, he’ll have a convincing case for the award.

It hasn’t taken long for North Carolina Tar Heel freshman Cole Anthony to make his presence felt in the college basketball world. The New York native is enjoying a superstar-like start to his college career, averaging 27.3 points, 7.3 rebounds, and 3.3 assists. With the Tar Heels in somewhat of rebuilding year, Anthony has a chance to carry his team unlike other players on this list. Although Anthony may not be able to sustain his 27-points per game total throughout the entire season, he’ll still be one of the only freshmen in consideration for this award.

With +400 odds placing a wager on Anthony to win the Player of the Year award wouldn’t be a bad bet. Only Michigan State guard Cassius Winston has shorter award odds than Anthony. The Tar Heels have started the season undefeated (4-0) and that’s largely due to Anthony’s production. If Anthony continues to play like this through the Tar Heel’s tough ACC schedule, he has a great chance at taking over this award race while also becoming the fourth freshman to ever receiver the Player of the Year honor.

In an underrated Big East conference, Marquette guard Markus Howard will have to face some stiff competition if he’s to remain in the Player of the Year conversation. The senior guard is averaging 24.7 points per game as he’s led the Golden Eagles to a 2-1 start on the season. His scoring output is what makes Howard an intriguing bet for the award.

The +550 odds Howard is listed at is a good value right now, but it’s a wager that to fade. With a loaded Big East awaiting Howard, he’ll be able to put points up on the board. But if it doesn’t translate to wins for the team, he won’t be in the conversation for this award much longer. This makes Howard the least likely to win the award out of the other two players mentioned.

If these players can continue to play as they have throughout the season, the player of the year race will be one of the most exciting ones in recent memory.