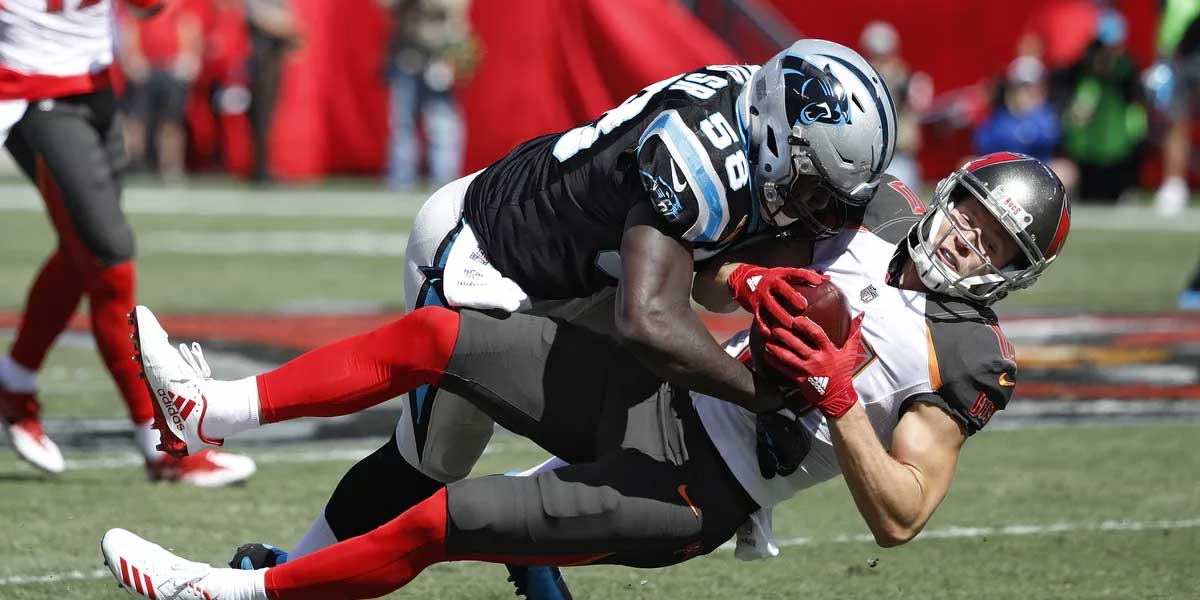 TAMPA, Fla. – Thursday Night Football is here, and the number of betting lines during primetime football games is always extremely high. Rather than sticking to standard gamelines for the Tampa Bay Buccaneers vs. Carolina Panthers matchup, take a look at nine of the most interesting props currently posted at online sportsbooks.

Matchup At A Glance

Tonight, the Carolina Panthers welcome their NFC South division rival in the Tampa Bay Buccaneers to Charlotte. Both teams are looking for their first win on the season, after the Panthers fell to the LA Rams on Sunday, while the Bucs lost to the San Francisco 49ers only a few days ago as well.

This will be the 38th meeting between the two clubs and the Panthers hold the lead in all-time wins over the Bucs by nine games (23-14).

With this rivalry history, which includes Carolina winning nine of the last dozen games, it is no surprise to see Carolina as the heavy favorite. The Panthers (-7) come into tonight’s home game looking to continue their control over the Bucs, who have lost all but one of the last six contests that took place in Carolina.

But Thursday night games are always interesting, as the short week doesn’t allow the teams to fully prepare for their opponents. Still, the previous games involving these two have been closer than the winning streaks may propose.

In their last 14 meetings, 49 points or more has only been met twice – once in 2015 and once last season in Charlotte. Taking the under is the side that the historical trend followers will be focused on in this matchup, and they might be on to something. However, margin of victory props could be more interesting, with the Panthers by 1-6 (+300) more reflective of what could be a close (but not as high scoring) game if betting on the favorite.

Carolina will want to run the ball but may find difficulties against a Bucs’ defense that was one of the few teams that did not allow a 100-yard rusher in Week 1. Additionally, the Bucs allowed only 3.1 yards per carry and their passing defense looked just as solid.

Tampa Bay allowed 158 passing yard – the third-fewest for a team during Week 1 – at an average of 6.1 yards per attempt. Likewise, Carolina only allowed 4.8 yards per attempt last week – good for 2nd best in the league – while also finishing in the top-10 for fewest passing yards allowed (183).

These impressive Week 1 numbers could allow the game to have a scoreless quarter. (Yes, +390). If this is the case, it would help another prop bet in betting on the highest-scoring quarter in regulation time. 1st Quarter (+600), 3rd Quarter (+500), and Tied (+525) offer high rewards for bettors.

Tampa Bay will have to find some benefits in their own run game tonight. Carolina was run over quite easily last week (allowing the 5th most rushing yards at 5.2 yards per carry). Though this has been missing link in the past, taking a few flier bets on Tampa’s run game could be a wise decision due to the inflated odds.

For example, Peyton Barber accumulating 70+ rushing yards and scoring one rushing touchdown comes with odds of +600. Add another 15 yards to this football prop bet and the line jumps up to +975.

Sportsbooks in the USA offer other prop bets including Curtis Samuel recording 3.5 receptions for the game. This line is even (without the juice), so taking the over could be a wise choice for those with faith in Cam Newton.

Christian McCaffrey is the engine on the Panthers offense, though. Betting on “Christian McCaffrey to have 2+ rushing TDs and CAR to Win” (+229), bettors could secure a sizeable payout for a game in which Carolina is favored and many points will be scored.

Who knows? If both hit, you’re looking at nine times your money and if only one hit, a profit is still made.