Skip to content
USA Online Sportsbooks | Sports Betting | Andy Ruiz Jr. Vs. Anthony Joshua Rematch To Happen By The End Of The Year 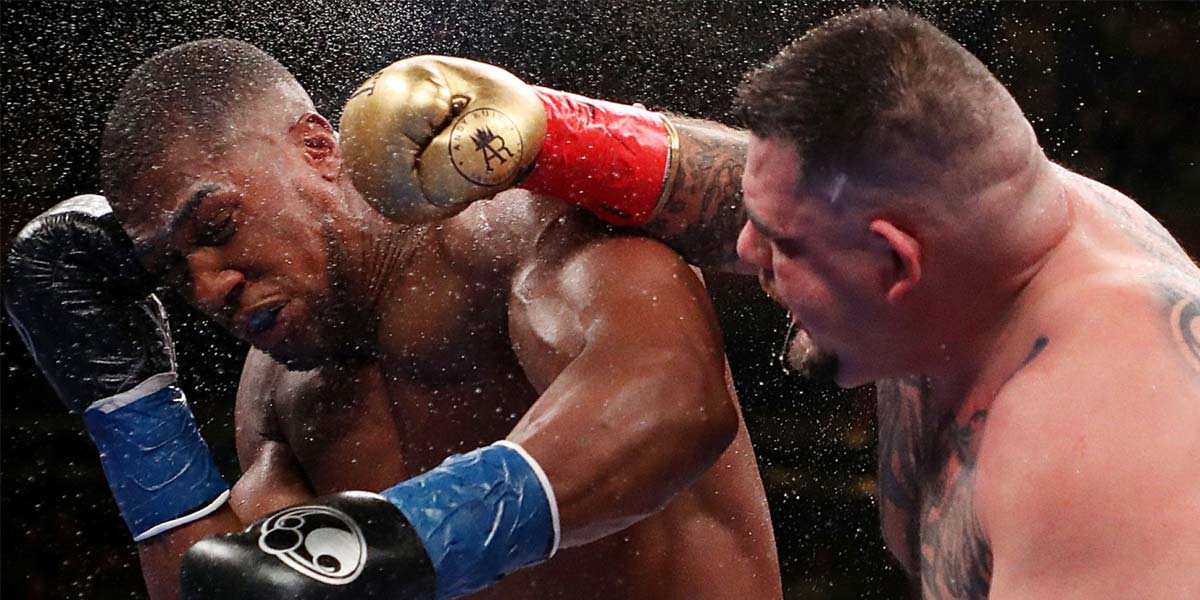 LOS ANGELES – A rematch is in the works for boxers Andy Ruiz Jr. and Anthony Joshua. Ruiz stripped Joshua of the Heavyweight Champion title in their last meeting at Madison Square Garden in June. He also gave Joshua his first professional loss. Originally, Anthony Joshua was supposed to fight Jarrell Miller but Miller failed three different tests to qualify for a license to fight by the New York Athletic Commission. Andy Ruiz Jr. threw his name in the hat as Miller’s replacement and he’s glad he did. He took down Joshua in seven rounds by technical knockout. Joshua had been knocked down twice in that round and was staggering to get to his feet. It was then that referees decided to call it.

When the fight was stopped, the judges’ scorecards were in Ruiz’s favor. The crowd was completely silent, in disbelief of what they’d just witnessed. In the history of boxing, this match is considered to be an upset of monumental proportions. Ruiz is the first Mexican boxer to become a Heavyweight Champion. "This is what I have been dreaming about. This is what I have been working hard for, and I can't believe I just made my dreams come true." Ruiz said to reporters after the fight.

A Rematch Is Coming

Immediately following his dethronement, Anthony Joshua was hungry for a rematch.

“It’s a test of character,” he said to the press after the fight. “We never fold. We stand strong at all times. I’ll address the situation and move on to the next. I just lost. Andy Ruiz was the better man. I have to take it on the chin and roll with the punches. I’m not dwelling on tonight. You correct it. You adjust. You go again.”

The beating he sustained during the fight left him with very little memory after round three. That is a nod to the brute strength that Ruiz has. Entering the fight, Ruiz had 30-1 odds of winning. All anyone could see was his massive size, as various media outlets dubbed him “the fat boy”. Weighing in at 268 pounds and standing tall at 6 foot 2, his appearance is misleading. He looks more like a big guy rather than a muscular one.

Now that he is the reigning Heavyweight Champion in the boxing world, he is the one that has the upper hand when calling the shots for a rematch. He does not have to fight Joshua at all but he will. A formal announcement of all the details will be happening within the next two weeks. While the rematch is officially happening some time at the end of the year, a date and a venue have yet to be chosen. Ruiz would prefer the rematch take place in Mexico or Los Angeles. Joshua wants to fight in the UK. Five separate countries have put in bids to host the fight.

Despite the brutal loss, Anthony Joshua is favored to win in the rematch with -335 odds. Ruiz has been given odds of +250 to win. USAOnlineSportsbooks.com knows the reason that Joshua remains the favorite is because he is still known around the world as one of the greatest fighters of all time. Anthony Joshua wants redemption. And boxing fans everywhere cannot wait to see if he goes out swinging.