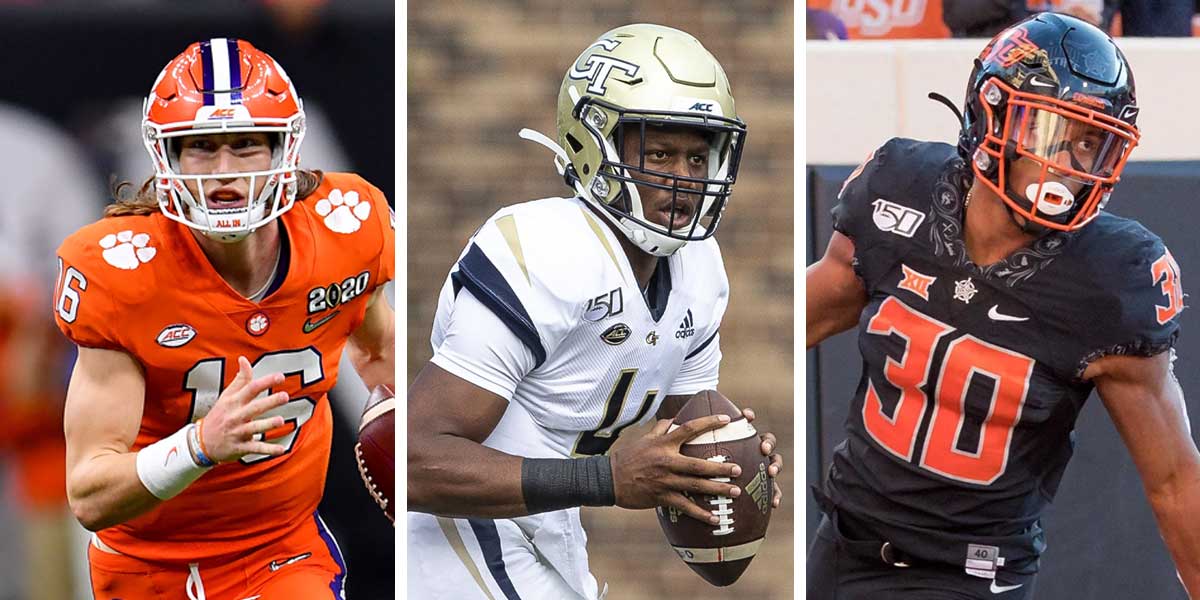 LAS VEGAS – The college football season is officially underway and with that comes a huge increase in CFB Daily Fantasy games.

One of the most popular college football daily fantasy games is DraftKings Saturday Kickoff, where players select a team of players from the day games to round out their fantasy roster.

Bettors are given a budget of $50,000 which they can spend on eight players to make up their squad on Saturday.

With the current state of college football, games are at a premium. With only 11 contests being eligible for this Daily Fantasy challenge, find value on players is more important than ever.

Most of the eligible games for this week’s competition come from the ACC and the Big 12, which are so far the only Power 5 conferences to begin play.

A good portion of the ACC teams are in action and eligible, with players from Clemson, Notre Dame, Syracuse, Pitt, Georgia Tech, Boston College, and Duke all available. They are joined by Big 12 teams Oklahoma State and Baylor, as well as teams from the American like Cincinnati, UCF, Houston, Tulsa, Navy, USF.

While that might seem like quite a bit of selection, the pickings are still slim for those looking to make a difference in their tournaments this weekend.

All the numbers here reference the player's price on DraftKings but can be compared to any of the top Daily Fantasy Sports platforms.

The obvious pick for the best quarterback in this group is Clemson’s Trevor Lawrence, who lit up Wake Forest in the Tiger’s first game.

Lawrence threw for 351 yards on 22/28 passing and one touchdown, adding two more on the ground by himself. Lawrence looked like his regular self, dropping pinpoint passes all over the field in his 2020 debut.

Here's a Trevor Lawrence throw from yesterday, just because pic.twitter.com/UOMFSIt2w3

Lawrence is clearly the strongest pick here as the Heisman trophy candidate and former national champion takes on the Citadel.

However, due to the strength of the opponent, potential buyers should be aware that Lawrence could get pulled as soon as the Tigers establish a healthy lead. Buyers should also factor in the popularity of the choice with so many teams out of action, including North Carolina and Sam Howell.

Those looking to choose a route other than Lawrence should look at the value of freshman Georgia Tech quarterback Jeff Sims.

Sims made his debut for the Yellow Jackets on the road at Florida State. Sims was able to perform well on a big stage, throwing for 277 yards and a touchdown while leading his team back from a 10-point deficit to get the win.

Sims’ stats don’t show the hesitation and nerves he had in the pocket, but they do show his two interceptions which were thrown directly to FSU corner Asante Samuel Jr.

While Sims had his struggles, he overcame them in the second half and put up solid numbers all things considered.

Hubbard makes his 2020 debut this Saturday when the Cowboys take on the Tulsa Golden Hurricane. Hubbard is the number one weapon for Oklahoma State and will look to build upon his terrific 2019 campaign where he ran for 2.094 yards and 21 touchdowns.

Hubbard will get the brunt of the work on Saturday as Oklahoma State likely won’t hold back against a competent in-state opponent.

Spears emerged as a solid DFS pick at online betting sites in Tulane’s first game against South Alabama. Spears led the Green Wave in carries and rushing yards, racking up a solid DFS score despite not reaching the endzone.

Spears is also a factor in the passing game, with Tulane QB Keon Howard sending two passes his way out of the backfield. Against a shaky Navy defense, Spears has great value at his current price.

The top wide receiver pick for the week would be Dazz Newsome if not for North Carolina’s game being postponed to due COVID-19 concerns. Instead, Wallace gets the nod this week in his 2020 debut for the Cowboys.

Wallace emerged as the biggest threat downfield for the Cowboys in 2019. Despite only playing eight games due to injury, Wallace racked up 903 yards on 53 catches and eight touchdowns. He should have no problem getting open against the Tulsa secondary.

Houston’s top pass catcher is sitting at a great price for this weekend for the Cougars’ matchup with the Baylor Bears. Houston will be looking to score fast and often against a Baylor team that loves to do the same in what should be a contest lacking in defense.

Last season, Stevenson caught 52 passes for 902 yards and nine touchdowns, showing his speed in both long and short routes. He will likely be quarterback Clayton Tune’s most trusted target for this season.