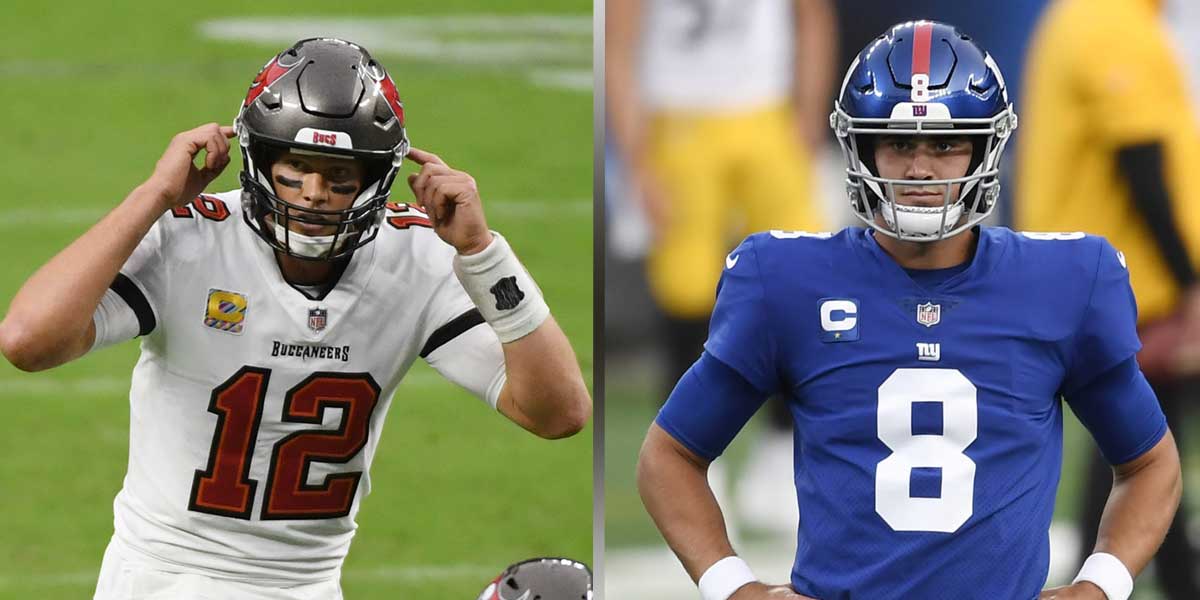 NEW YORK – With a Monday Night Football matchup between the Tampa Bay Buccaneers and New York Giants, there are plenty of player prop bets for NFL bettors to choose from and take advantage of.

Online sportsbooks have odds listed for the total number of passing yards for both quarterbacks as well as totals for certain receivers and running backs also.

Starting with the quarterbacks, there are not only totals for both of their passing yards, but there are also odds on if they both will hit over a certain amount of yardage also.

Looking at Tom Brady, he has only hit the over this season three times out of seven games.

However, he is coming off of a 369-yard game in Week 7 in which he will certainly be looking to back that up in Week 8. Something else to keep in mind is the mentality of Tom Brady, meaning that other quarterbacks in the NFL had great performances in Week 8 such as Patrick Mahomes (416 yards, 5 touchdowns), Russell Wilson (261 yards, 4 touchdowns), and Drew Brees (280 yards, 2 touchdowns).

With Brady’s mentality, there is no doubt that he will be looking to top those performances and hit the over.

As for Daniel Jones, he has only hit the over three times this season as well out of the seven games that he has played. The over here is a tough one to swallow as Jones has been very inconsistent this season thus far and the Buccaneers defense won’t make it any easier for him as they have come up with an interception in their last three games.

That being said, bettors can lean towards the under.

When looking for a longshot bet to place on Monday Night Football, those that want to risk little funds on if both Brady and Jones will hit over 399.5 yards each can do so with +25000 odds.

Brady should be able to come by that total easier than Jones but if the receiving end in New York gets their heads on straight now that they are fully healthy, anything could happen.

There are also prop bets on the yard totals for Sterling Shepard as well as Mike Evans.

Shepard has hit the over in two of his three games played this season including his first game back from injury where he posted 59 yards.

However, this Buccaneers defense ranks 9 in the league against opposing wide receivers which could leave him staying under the total. Also, the 61.7 QB rating for Daniel Jones doesn’t help him either.

As for Mike Evans, the Over here should be easy money for NFL bettors as he is the acting WR1 for this Buccaneers receiving group while Chris Godwin is out. Evans has only hit the over in two games this season but all the extra space without Godwin should help him hit the Over.

Bettors here looking for another “riskier” bet to place can do so on the over for Fournette’s rushing total.

Fournette has gained a larger role in this Buccaneers offense and it was made clear in Week 7 where he rushed 11 times for 50 yards and had 6 receptions for 47 yards.

The head coach of the Bucs, Bruce Arians, has also made it known that Fournette will be used in all nickel formations which means he will get more opportunities starting in Week 8