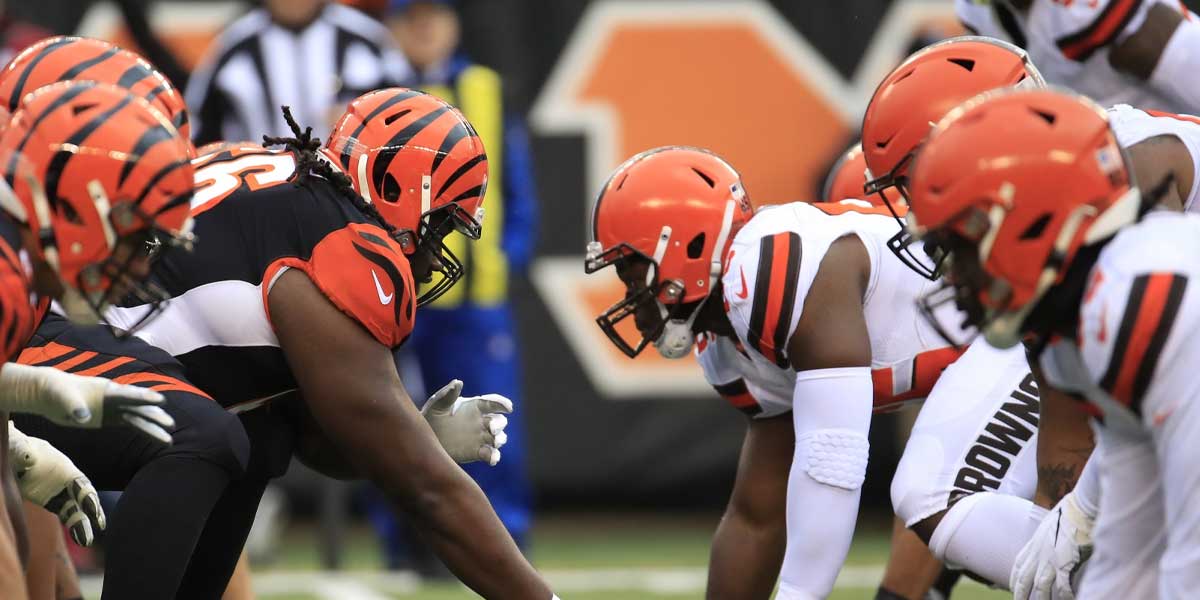 CLEVELAND — The NFL made its return to betting menus and screens for the first time amid the coronavirus pandemic as the first week went smoothly with no players or coaches testing positive for COVID-19 leading up to kick off.

The NFL’s protocols seem to be working and Week 2 of the regular season has a green light with no games being postponed thus far.

The second week of the NFL regular season brings along six divisional matchups that could shift the balance of power in the league early. The importance of winning divisional games cannot be understated as each division winner is guaranteed a spot in the playoffs no matter their record.

Additionally, these early divisional games give bettors a chance to see how teams will perform against a familiar opponent as each team plays every team in their division twice.

Joe Burrow didn’t have the debut he would’ve liked for the Cincinnati Bengals as the offense struggled to put up points against a stout LA Chargers defense.

The Browns defense should be an easier matchup for the rookie Burrow and although Cleveland is the favorite in this AFC North battle, the Bengals can’t be counted out as an underdog. Bettors should take the Bengals +200 moneyline odds to pull off the upset over the Browns who have -240 odds to win on Thursday Night Football.

In what should be a close game expect it to be high scoring as well so lean towards taking the over.

The Detroit Lions will look to put behind them the fourth quarter meltdown they had last week against the Chicago Bears. The Lions will face another NFC North opponent as they travel to Green Bay to take on the Packers.

The Packers are favored to beat the Lions by six points at Lambeau Field in Week 2. A Lions upset victory over Green Bay comes with +225 odds on the moneyline.

The Packers ML odds sit at -275 and they should taken to extend the Lions losing streak to 11 games.

The total for this game is set at 49.5 points which is one of the highest totals in Week 2, take the over although most of the scoring will be done by the Packers.

The AFC South matchup between the Jacksonville Jaguars and the Tennessee Titans could end up being a trap game as the Jags pulled off the upset last week against the Indianapolis Colts.

Both teams come into this game undefeated and early on, one team can pull ahead of the AFC South. The Titans are nine-point favorites to beat Jacksonville in Week 2. The Titans have just let Derrick Henry lose on the Jags defense and he should have another monster game on Sunday.

If looking to go against the grain and bet on Gardner Minshew leading the Jags to another victory, take the +290 money line odds.

The Titans SU odds sit at-380 which makes them perfect to add onto a parlay. Both offenses should put up points and the 43.5 total set for this game is likely to go Over.

The AFC East matchup between the Buffalo Bills and Miami Dolphins is an overlooked matchup this week.

The Bills have dominated the series with Dolphins and they’re favored to continue their winning ways by six points on Sunday. The moneyline has the Bills at -250 odds while the underdogs Dolphins have +210 odds to win.

The total for this game is set at 41 but bettors should head towards the over as Dolphins quarterback Ryan Fitzpatrick will lead Miami to at least 14 points in this one.

Both the Panthers and Buccaneers are looking to notch their first win of the season in this NFC South rivalry.

The Buccaneers might be without star wideout Chris Godwin in this game but his absence still gives Tampa the edge over the Carolina Panthers by an 8.5-point spread at USA online sportsbooks.

The Bucs are also heavily favored on the moneyline with -380 odds, while the Panthers odds to pull off the upset are at +290. Both teams have new quarterbacks under center and expect this to be one of the higher scoring games in the NFL so take the Over.

The last divisional matchup in Week 2 of the NFL season is the defending Super Bowl Champion Kansas City Chiefs taking on the LA Chargers.

These teams split their series last season but the Chiefs are heavily favored to beat the Chargers as evidenced by the nine-point spread.

The Chargers defense is one of the best units in the NFL but that won’t stop Patrick Mahomes from lighting up The SoFi Stadium scoreboard as the Chiefs cruise to a win. The moneyline will be where the Chargers bettors cash in as their +320 odds are worth a small wager.

The total for this game is 47.5 take the under as most of the scoring will come from the Chiefs and not from the offense led by Tyrod Taylor.