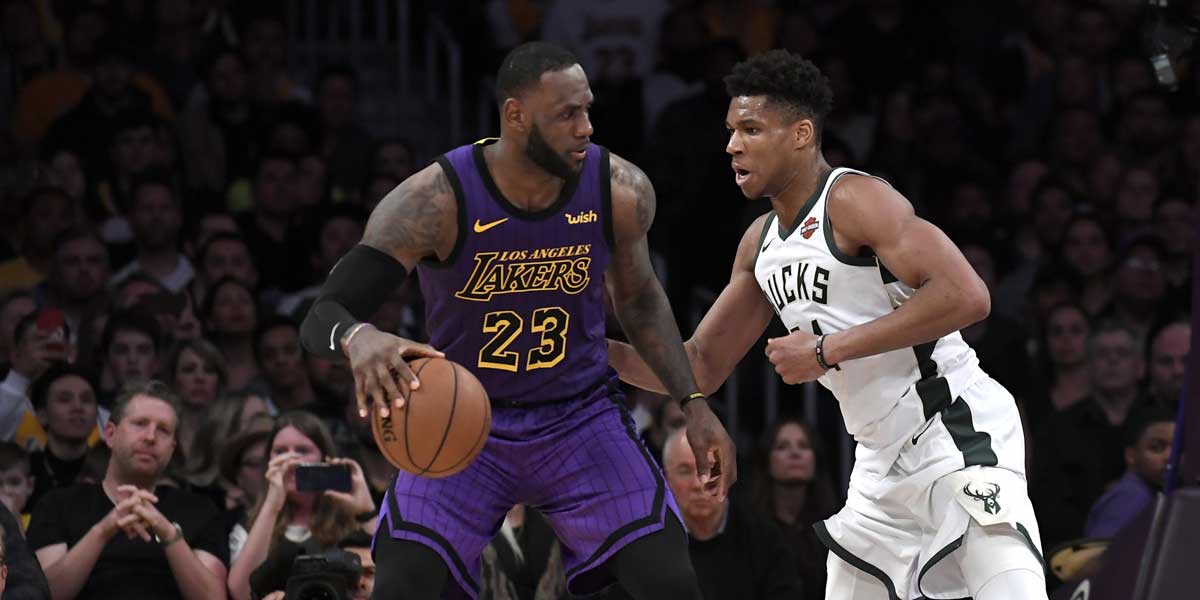 LOS ANGELES – On Friday, the top two teams in the NBA are set to clash in what will be a powerhouse matchup. The Milwaukee Bucks are sitting at 53-9 while the Los Angeles Lakers are at 47-13. Both teams are looking to find ways to get the upper hand on each other.

Not only are these the top two teams facing off but these are arguably the top two players in the world right now in LeBron James and Giannis Antetokounmpo that are about to go toe to toe. NBA betting sites are expecting an almost even game, but can past performances and trends indicate a winner?

Right off the bat, online sportsbooks have this game set as a pick’em. The Over/Under for total points combined is 228. The total team points for both the Lakers and Bucks are even at 114.

As mentioned before this is going to be a power heavy matchup with the top two teams and top two players facing off. At first glance, bettors might think the Bucks are an easy bet considering their record, but the Lakers might have a slight edge on them as they have a bit of a deeper roster.

However, that slight advantage could move to the Bucks favor if they play out this game smart. First things first, they need to focus on containing either LeBron or Anthony Davis. Let’s be honest there is no way they could contain both. They must close out on three-point shooters and force them to drive the ball inside as they are a lengthy team and could contest shots inside the paint.

For the Lakers, there is no question about it, LeBron James must stick to Giannis like glue and not leave him any space to maneuver his way to the rim. They need to force him to shoot from beyond the three-point line as that’s his weakest shot selection. On the contrary, for Khris Middleton, they must limit his space from three and force him to put the ball on the floor.

The Bucks got the Upper hand the last time these two teams met in Milwaukee where the Bucks won 111-104.

The Bucks are near unstoppable at this point. They have the best record in the league right now at 53-9 and the best home record in the league at 28-3. The Greek Freak is contributing to every aspect of his game at an elite level with 29.6 ppg, 13.8 rpg and 5.8 apg. Khris Middleton has been very reliable number two star for Milwaukee as he averages 20.9 ppg, 6.3 rpg and 4.1 apg.

After Giannis and Middleton, there is a bit of a fall-off in-depth but their supporting players do play valuable minutes and should be taken seriously throughout the game. Any one of them could blow up on any given night as they’ve done before. Guys like George Hill, Wesley Matthews, Ersan Ilyasova, and Brooke and Robin Lopez. On a nightly basis, these guys play consistently good.

One player that could be a sleeper in this game for daily fantasy players is Eric Bledsoe. Bledsoe has been a solid complementary piece to this roster as he averages 15.3 ppg, 4.7 rpg and 5.4 rpg.

With most of the focus being on Giannis and partially on Middleton, Bledsoe could be in for a big night as he scores the ball well.

As mentioned before, NBA bettors should not be so quick to jump on the Bucks. The Lakeshow has been putting on some great team basketball.

At 35-years old LeBron James is averaging a near triple-double with 25.4 ppg, 10.7 apg and 7.8 rpg. Not to mention his partner Anthony Davis who has been putting up elite numbers on a nightly basis. He goes for 26.6 ppg and 9.5 rpg.

Obviously, the superstar duo carries the bulk of the scoring but they are great at getting others involved. LeBron really does make others around him great. Specifically shining the light on Dwight Howard. Many thought that Howard's days in the league were numbered but he has proven otherwise as he plays a crucial role off the bench averaging 7.8 ppg and 7.6 rpg. Rajon Rondo as well, as the first guard off the bench he is spreading the ball around great as he averages 5 apg.

This Lakers team has gotten stronger as of recently as they’ve brought in both Markieff Morris and Dion Waiters. These are huge additions as they add more depth and scoring to their roster.