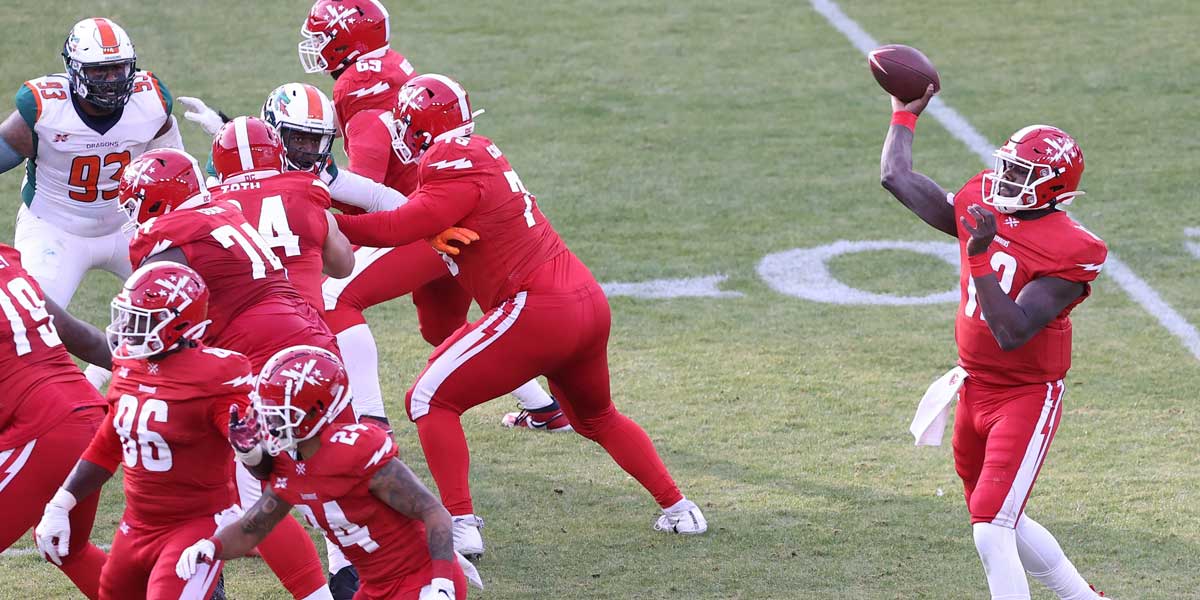 HOUSTON – The XFL’s opening weekend was filled with a bunch of firsts as the rebooted league looks to build a fanbase across the nation.

The first game of the season, in particular, seemed to have made an impression on oddsmakers as the D.C. Defenders now have the shortest odds to win the XFL Championship.

Each of the league's eight teams in action on Saturday and Sunday afternoon in games that were broadcasted on major networks like ABC, ESPN, and FOX. Across the four games were refreshing rules changes that made the XFL’s viewing experience differ from watching an NFL game.

The television ratings for the XFL got off to a good start as the opening game between the DC Defenders and Seattle Dragons garnered a peak viewership of four million during the Sunday broadcast for ABC.

With so many eyes on the game, the Defenders would go onto beat the Dragons 31-19 to earn their first win of the season. DC was Led by former Ohio State Buckeyes quarterback Cardale Jones who threw for 235 yards and two touchdowns while adding in 28 rushing yards on nine carries.

The Defenders opening day performance has earned them the shortest odds of any team to win the XFL Championship with U.S. sportsbooks listing them at +300 odds. DC should remain one of the best teams in the league throughout the season as they are one of the most complete teams in the XFL. The 1-0 Defenders will play the undefeated New York Guardians in Week 2.

What About The Other Teams?

The team with the next shortest odds after the Defenders is the Houston Roughnecks who have +350 odds to win the XFL title. The Roughnecks dominant 37-17 win over the Los Angeles Wildcats put the XFL on notice that Houston will be one of the teams to look out for this season. In Week 2 the Roughnecks will face the undefeated St. Louis BattleHawks in Houston.

After the Defenders and Roughnecks, the Dallas Renegades have the third shortest odds (+500) despite suffering their first loss of the season to the St. Louis BattleHawks 15-9.

The Renegades are one of the teams who have seen their odds become longer after Week 1 and another loss shouldn’t warrant fading them on a futures wager. Dallas will have a chance to get back on track with an away matchup against the Los Angeles Wildcats.

If a bettor wants to roll the dice on some longshot XFL odds the Seattle Dragons have the longest odds of any team with BetOnline listing them at +1200 odds.

Week 2 of the XFL will begin Saturday, February 15 at 2 p.m. EST when the New York Guardians travel to the nation’s capital to take on the DC Defenders in a battle of undefeated teams. This game will be broadcasted nationally on ABC.