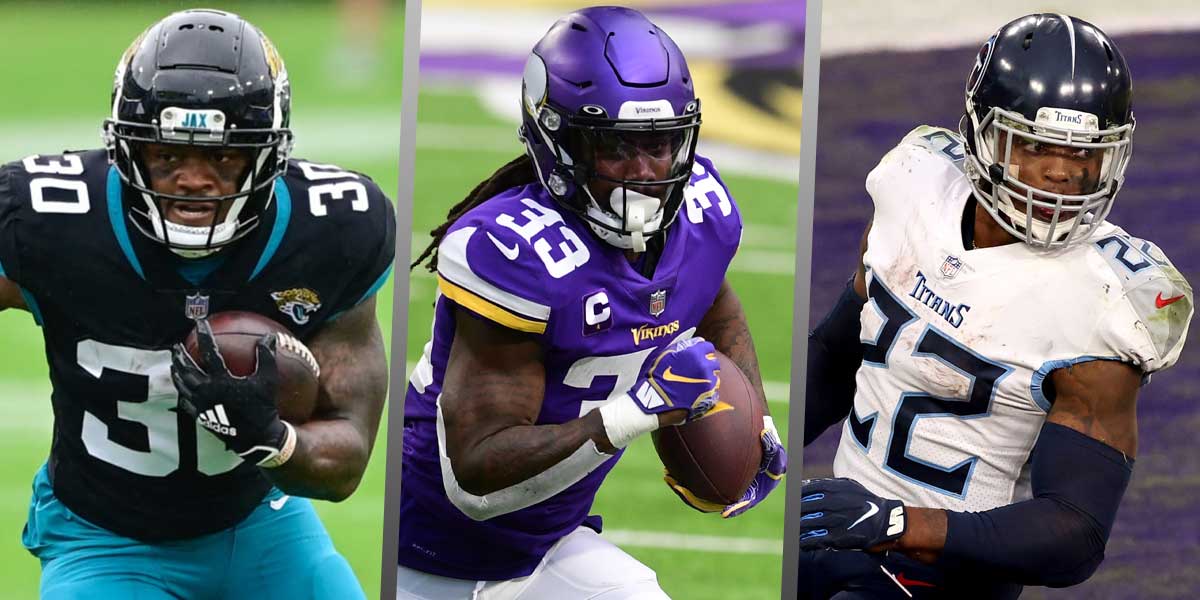 JACKSONVILLE, Fla. – In order to win an NFL rushing title, it takes a certain breed of player.

Players like Emmitt Smith, Ladinian Tomlinson, and Adrian Peterson are all a certain type of player that has dominated trenches for years. Large, strong, fast, and powerful are a few of the adjectives used to describe these types of dominant running backs.

Derrick Henry certainly meets all those standards, and currently leads the NFL in rushing yards in 2020 for the Tennessee Titans with 1,257 yards so far in 2020 through 11 games.

Henry is followed by Minnesota Vikings running back Dalvin Cook, who comes in at 1,130 yards with 10 games played.

Now, not many NFL sports bettors are surprised to see those two top backs leading the way in 2020. However, coming in third on the rushing list in 2020 is Jacksonville Jaguars undrafted rookie James Robinson.

Robinson comes in at 890 yards so far in 2020 and is firmly a star for the Jaguars this season.

James Robinson is the best rookie RB in the league.

While Jacksonville is currently 1-10 and just fired their GM in Dave Caldwell, Robinson has been a huge bright spot in an otherwise forgettable 2020 campaign for Jacksonville.

In fact, Robinson currently holds 1.170 total yards from scrimmage this season and is in danger of breaking Dominic Rhoades' 2011 record of 1,328 for most yards by an undrafted rookie from scrimmage in a season.

While that would be a tremendous accomplishment, some handicappers are offering betting lines regarding the rushing title in 2020. While Henry and Cook lead the way, there is tremendous value on someone wagering on Robinson via the major online sportsbooks.

Robinson is available for a crazy +2500 price, leading many to wonder if it is possible for the rookie to lead the league in rushing.

In order to do so, Robinson would need to rush for 367 yards more than Henry down the stretch while continuing his current production.

Currently, Henry is averaging 114.3 yards per game, while Robinson averages 80.9. It is likely that Robinson would need to bust out a couple of 100-yard affairs in order to catch King Henry.

Unfortunately, those are all stingy teams when it comes to run defense, meaning Robinson would have to do some serious work to eclipse Henry or Cook.

In a year like 2020 much crazier things have happened, so be sure to keep track of these stats heading down the stretch.