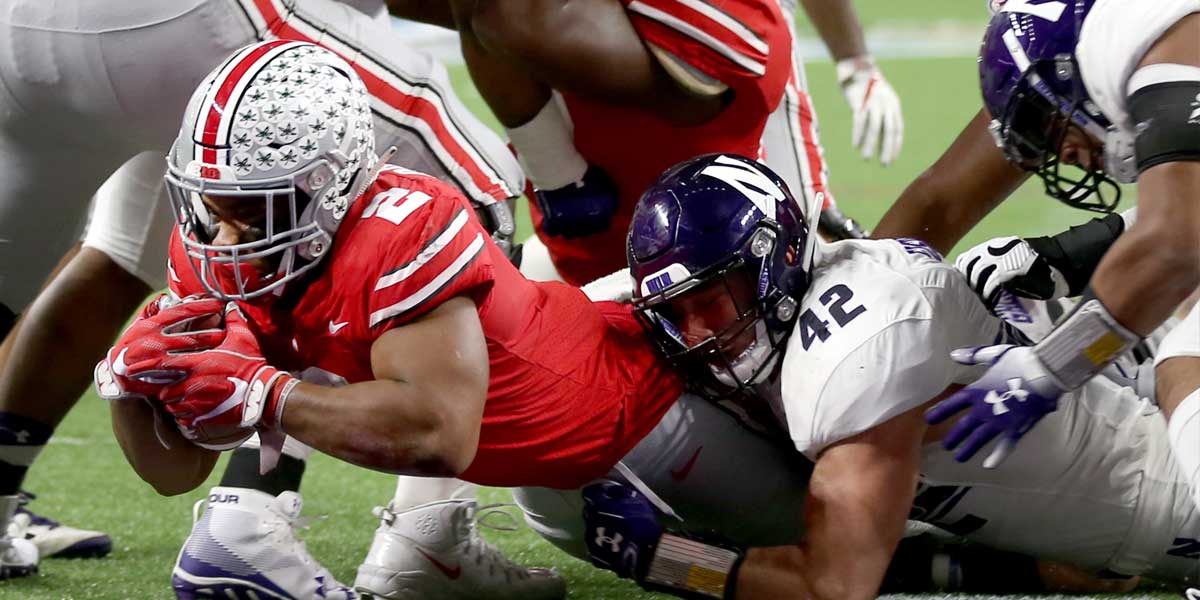 EVANSTON, Ill. – The Ohio State Buckeyes, led by quarterback Justin Fields, are running all cylinders this season. Heading into Week 8 as the Buckeyes prepare to take on the Northwestern Wildcats on the road, get a break down of the spread, player matchups, and final prediction of this BIG 10 matchup.

For the seventh straight game this season, Ohio State will be listed as a double-digit favorite. None of this comes as new news considering the Buckeyes have been blowing through teams in college football week after week. In fact, the Michigan State Spartans were the only team so far this season to keep Ohio St under 42 points. Tonight will be no different.

On offense, Justin Fields has been nearly perfect running the offense for the Buckeyes. On the season, he’s thrown for 1,298 passing yards to go along with 26 total touchdowns (18 passing TDs, eight rushing TDs). Combine that with a completion percentage of 69.5% and only one interception thrown on the season, and you have a consideration for a top draft prospect. Toting the ball on the ground is running back J.K. Dobbins, who is averaging 6.3 yards per carry for 826 yards on the season. To put it mildly, the Buckeye offense is lethal.

On defense for the Buckeyes, they are led by their budding defensive end Chase Young. The junior defensive end, who stands at 6’5, 265 lbs, has already accumulated 8.5 sacks on the season. Throughout the six games he’s played in this season, he’s already on pace to break his numbers from his sophomore season, where he recorded 15.5 TFLs and 10.5 sacks. Young is a one-man wrecking show and is like a high draft pick for the 2020 NFL Draft.  It’ll be very difficult for the Wildcats to contain such a high powered offense and defense.

Northwestern, conversely, has had a troubling start to their season so far. The Wildcats have gotten off to a 1-4 SU start to the season and now face the No. 4 ranked team in the country. The story of Northwestern’s season is that their defense is the backbone of the team. And while old adage that “defense wins championships...” is true, defenses also can’t score consistently.

The Northwestern offense has been quite abysmal in 2019, averaging 14.4 points per game. The unusual dual quarterback offense the Wildcats run has so far failed this year. Hunter Johnson and Aidan Smith have combined for 640 passing yards, two passing touchdowns, and eight interceptions. With a true freshman manning the running back position, to no avail, this Wildcats offense is going downhill and downhill fast.

The defense is the lone bright spot for the team. Led by senior defensive lineman Joe Gaziano, who has 24.5 career sacks and eight career forced fumbles, the Wildcat defense is only allowing a stingy 19.8 points per game in a very difficult conference. Still, with an offense that averages 14.4 points per game and a defense who gives up 19.8, the writing may be on the wall for Northwestern tonight.

This will likely be one of the more one-sided BIG 10 matchups that will be seen all season. Ohio State (-3500) enters tonight’s game favored by 28 points. Expect Ohio State to continue their current 12-0 SU streak and push it to 13-0 by night's end. For Northwestern (+1400), who's playing at home, the name of this game is to not be embarrassed in front of your home crowd.

The stellar defensive play will keep this blowout to a moderate, lower-scoring level and could also allow Northwestern bettors to cover. The Wildcats are 11-3 ATS in their last 14 games played in October. With a blowout loss for the Wildcats pretty imminent, there is a better value in betting on the team to cover (+28, -110) and shoot for the Under at US sportsbooks.