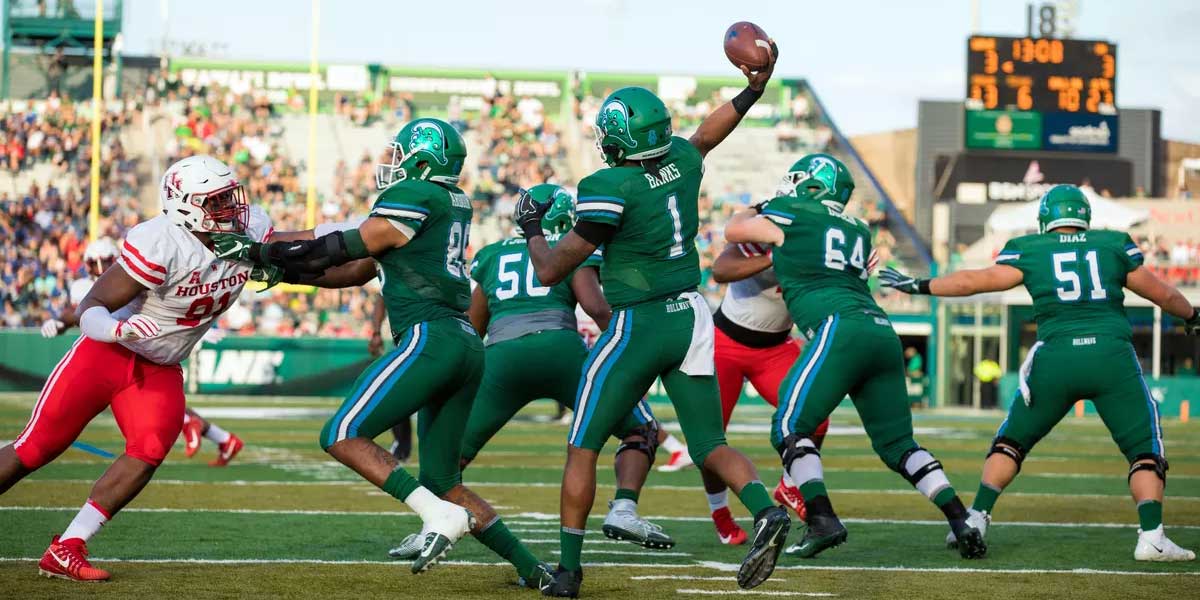 The Houston Cougars are heading into tonight’s road game at 1-2, going up against the Tulane Green Wave. The Green Wave have somewhat taken college football by storm with how quickly they have improved since their 2018 season. With their only loss against Auburn (24-6), the Cougars may be facing some fairly stiff competition tonight.

Houston’s main problem with Tulane will be their stingy defense that gave up only 24 points to Auburn and a combined 20 points in their other two games. Led by junior linebacker, Marvin Moody – who had the third most tackles in 2018 with 71 – the Green Wave have been shutting down opposing offenses with ease. The big key for Tulane’s defense will be to stop the Cougars’ dynamic quarterback, D’Eriq King. King’s dual-threat ability will force Tulane to apply pressure when he’s sitting in the pocket.

On offense for Tulane, Darnell Mooney stars as the main centerpiece for the Green Wave after putting up 993 receiving yards and eight touchdowns just a season ago. Tulane also has a running back by committee approach in the backfield, where five players (including quarterback Justin McMillan) have over 100 yards rushing. It’s a very RPO type offense that will keep Houston guessing.

For the Cougars, they are led on offense by starting quarterback, D’Eriq King. King, who led the nation last year in points responsible for per game at 27.5, is a matchup nightmare in his own right. However, he will need to bring his “A-game” tonight against a very solid Green Wave defense to figure out a way to put points on the board. Granted, it looks as if the Green Wave have the more talented team, but Houston is 8-2 SU in the matchup’s last 10 games.

Defensively, though, is where the Cougars might give up some slack throughout the game. In Week 2 against FCS team, Prairie View, Houston gave up 17 points and frankly it should have never gotten that far. But a closer look at the stats reveals that Houston is currently giving up 32 points and over 340 passing yards a game. It’s one of the many reasons for the Cougars’ slow start this year, and the rushing defense wasn’t an upgrade either. While it won't be a blowout in New Orleans, Houston simply won't have the manpower to shut down Tulane's offense.

Overall, with the way Tulane has been playing as of late, it would be hard to go against them at home in New Orleans. The Green Wave are 6-1 SU in their last seven home games, so that trend is not likely to change going up against Houston. Entering the game as 5-point favorites, Tulane could use a win against their AAC rival to get a one-up in the standings.

For Houston, it looks as if their hopes of coming out with a win will be dependent on how well D’Eriq King plays and if he’s able to completely elevate his team to a win. Even if the game becomes competitive in nature, the last five out of six meetings between these two have gone under the projected point total. US sportsbooks have 57 points on the over/under for the game tonight, expect the added competition to slow the game down a bit. In other words, the under would be the play of the night.