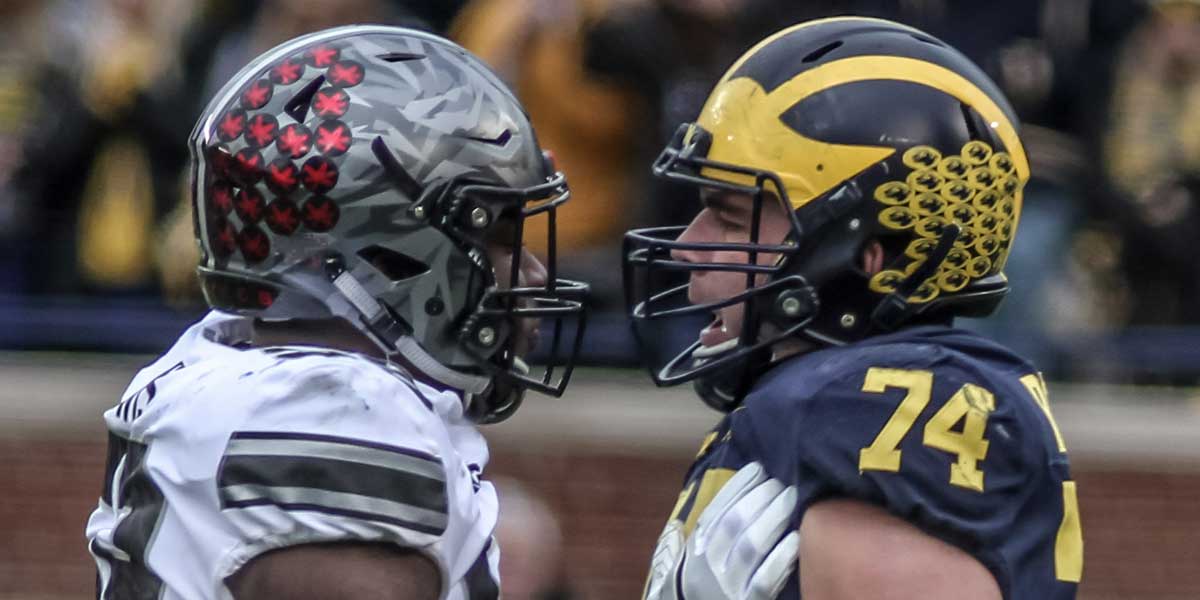 ANN ARBOR, Mich. -- The final week of the College Football regular season has finally arrived, and many teams have already positioned themselves for a postseason bowl berth. A win or a loss during this week could be the difference in getting one of the superior bowl bids or getting a low tier bowl bid. Without further ado, the best bets for the last week of the college football regular season are below.

The Ohio State Buckeyes have been one of the most dominant teams we’ve seen in college football this season and heading into this week they’ve regained the top spot in the College Football Playoff Rankings. They’ve gone through the gauntlet of ranked Big Ten opponents this season and have come out unscathed. This will be the second Top 25 ranked team the Buckeyes have faced in as many weeks, and this is a game that they should win.

The Buckeyes are 8.5-point favorites to record their eighth straight victory over the Michigan Wolverines. The Wolverines are one of the better teams in college football with a 9-2 record. The two losses were to the No. 12 Wisconsin Badgers and No. 10 Penn State Nittany Lions. The Buckeyes beat both of those teams by a margin of 66-24 when they faced them earlier this season. Ohio State’s offense is averaging 49.4 points a game and the 50.5 total for this game seems like a lock to go Over.

Heisman Candidate and defensive lineman Chase Young returned for the Buckeyes last week and made an immediate impact with three sacks and two forced fumbles. He will be a player to watch in this matchup as he’s the most dominant defensive player in college football. The best bet in this game is to take the Over in this matchup as the total has hit the Over in six straight meetings between the Buckeyes-Wolverines, and take Ohio State ATS.

The Big Ten Conference brings us another Top 25 matchup this weekend as the No. 12 Wisconsin Badgers (-140) take on the No. 8 Minnesota Golden Gophers (+120). The Minnesota Golden Gophers are underdogs at home because they’ve lost seven straight games when hosting the Badgers at TCF Bank Stadium. Minnesota has been one of the most surprising teams in the Big Ten this season and this will be the year they snap their home losing streak to the Badgers.

The Wisconsin Badgers have leaned on running back Jonathan Taylor all season long as he’s run for the second-most yards in the nation with 1,685 while adding in 18 touchdowns this year. To prevent an upset here they’ll have to continue to give him the ball and control the clock because Minnesota’s passing attack will allow them to put points on the board quickly. For this matchup the total for the game is set at 46 points; with both teams having high powered offenses, points will not be hard to come by.

A moneyline bet at US Sportsbooks on the Golden Gophers would also be a good play in this game. However, taking the Over will be the best bet in this game as it has done so in 15 of the last 19 games between these two programs.

Sooners quarterback Jalen Hurts has been sensational both passing the ball and running it alike. Hurts has thrown for 3,184 yards and 30 touchdowns while rushing for 1,156 yards and 17 touchdowns this season. He’s already cemented himself in the Heisman Trophy conversation and the Sooners will rely on him to deliver a victory over the Cowboys.

Oklahoma State has one of the best running backs in the nation in Chuba Hubbard. Hubbard has run for an NCAA leading 1,832 rushing yards this season and will be a big reason why the Sooners won’t be able to cover the spread. The best bet here will be to take the Sooners SU because in their last seven games they’re 1-6 ATS and Oklahoma State’s offense is talented enough to keep this game close.