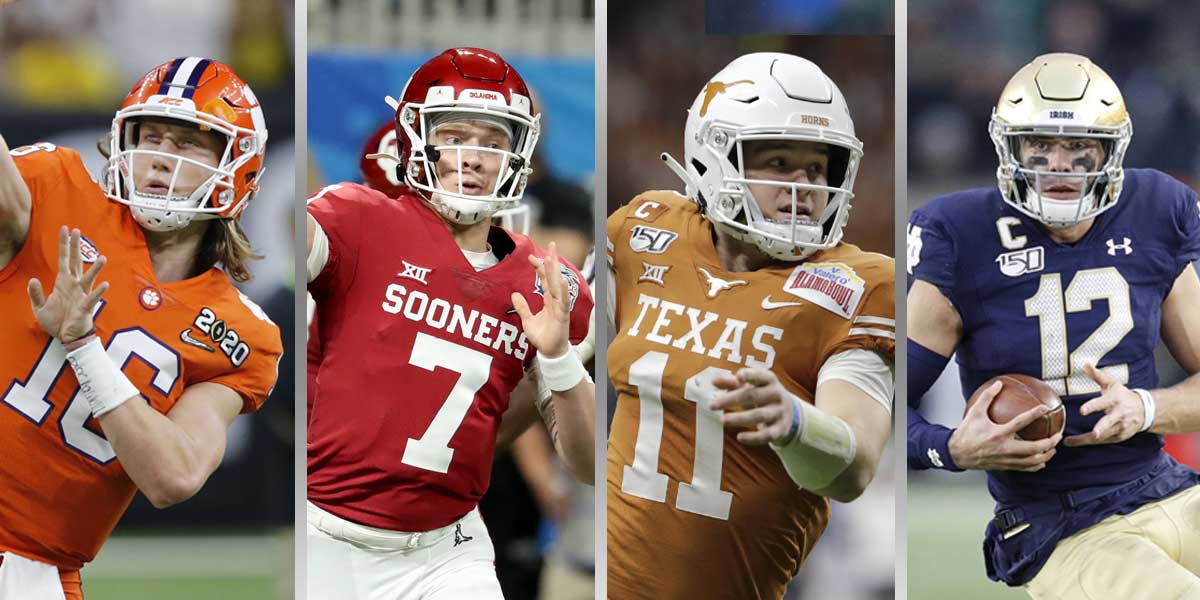 LAS VEGAS – This year’s College Football season will be unlike any other amid the coronavirus pandemic as some Power 5 conferences have elected not to play football games while other conferences are considering a spring start to the season.

With a lot of uncertainty surrounding the college season and some of the top players opting out of the season to protect their 2021 NFL Draft status, there’s no telling how this season will play out.

Nonetheless, the College Football Playoff Selection Committee has every intention of selecting the four best teams to compete for a national championship by the end of the year.

Most teams will only be playing their conference schedules this season and that makes betting on teams win totals at USAonlinesportsbooks this season easier.

There will only be six major conferences playing this year the American Athletic Conference (AAC), Atlantic Coast Conference (ACC), Big 12, Conference USA, and Sun Belt Conference will all play their football games in the fall.

The NCAA has given the conferences the power to decide what will become of college football season.

Of those conferences, the top teams to keep an eye on this season are Clemson, Notre Dame, Texas, and Oklahoma. All of them could be among teams considered to make a run at the College Football Playoffs.

Winner: Over 10.5 Wins (-120). The Clemson Tigers were last year's CFP runner-up and return most of the top talent from that team. Strictly playing in the ACC will help Clemson as no other team in the conference should give the Tigers any problems.

This bodes well for Clemson as they will likely go Over the 10.5-win total set for them this season. The only team on Clemson’s schedule this year that bettors should worry about is a November meeting with the currently 10th ranked Notre Dame Fighting Irish.

All things considered; it’d be shocking to not see the Clemson Tigers competing for a national championship in a COVID-19 altered season. Take the Over for this prop as Trevor Lawrence will show why he’s the top-rated prospect in the upcoming NFL draft.

Winner: Under 7.5 Wins (+130). The Fighting Irish will be playing in the ACC for this year and that could mean this team could underperform this season.

It won’t be an easy road for Notre Dame to get the Over as they have matchups against No. 1 ranked Clemson, and the No. 18 North Carolina Tar Heels as well as tough meetings against improved teams like the Florida State Seminoles and Louisville Cardinals.

The two losses against ranked opponents plus an upset victory would keep the Fighting Irish from winning Over 8.5 games so bettors should feel comfortable taking the Under.

Adjusting to the play of the ACC won’t be easy for Notre Dame especially amid a pandemic. They’ll likely win eight games this season and that’s not enough for the Over to hit.

Winner: Over 8.5 (-125). The Oklahoma Sooners have some major pieces to replace as quarterback Jalen Hurts and wide receiver CeeDee Lamb both were selected in the NFL Draft.

The Big 12 will be one of the more competitive conferences in college football this season as Oklahoma already has three ranked teams on their schedule in the No. 14 Texas Longhorns, No. 23 Iowa State Cyclones, and No. 15 Oklahoma State Cowboys.

The Longhorns will be the biggest threat to Oklahoma in the Big 12 but outside of them, the Sooners will have smooth sailing with the occasional close game.

The Big 12 schedule for the Sooners will challenge this team as they expect to make a playoff push. Take the Over total for the Sooners win total this season as they’ll likely only lose one game heading into the playoffs.

Winner: Over 7.5 (-135). The Texas Longhorns are the second-best team in the Big 12 and don’t have a strenuous schedule outside of their annual meeting with the Oklahoma Sooners.

The Longhorns win total is set at 7.5 is a bit low for a team that will return its best player in quarterback Sam Ehlinger. Take the Over for Texas as they look to finally piece together a full winning season under head coach Tom Herman.

The Longhorns could drop two games in the Big 12 and still go Over on their win total this season. They’ll have close games against Iowa State and Oklahoma State but an experienced Ehlinger could be the difference-maker for the Longhorns in what should be a bounce-back year for the program. Take the -135 odds that this team records more than 7.5 wins.