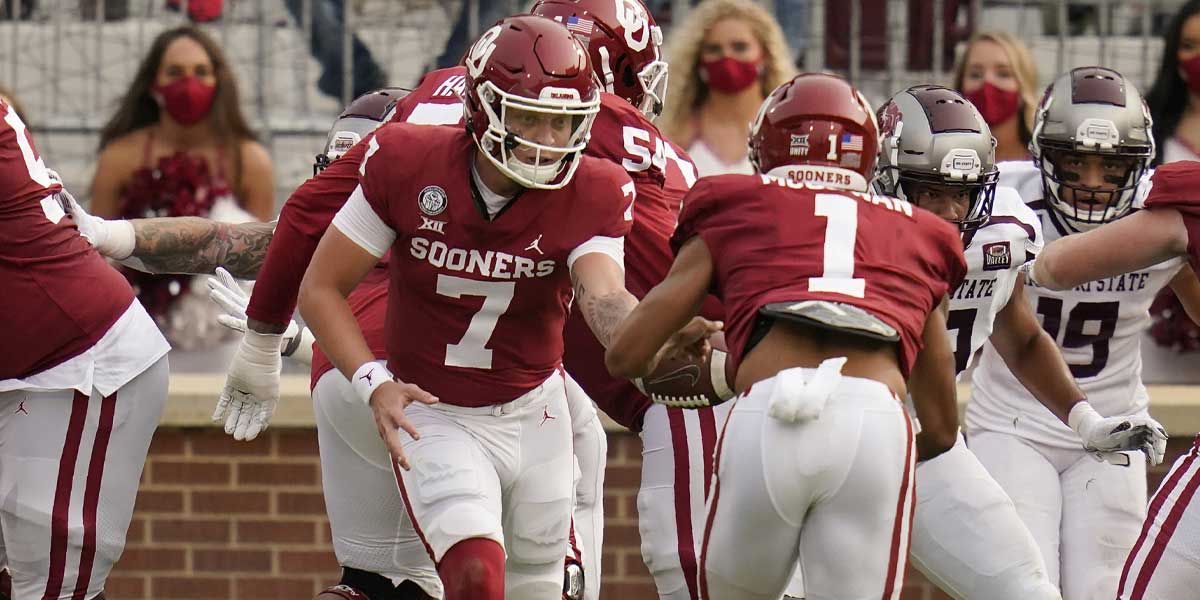 DALLAS – After two weeks of out-of-conference play against mid-major teams, the Big 12 kicks off its interleague play Saturday.

All 10 teams are in action, with most of the bigger names coming in as heavy favorites in their first matchup of the season.

Between all five matchups, there are some intriguing point spreads and odds that are worth a deeper look for college football bettors looking to get back to work.

Full game lines and wagers are now available on all of the major online sportsbooks.

The Oklahoma Sooners will look to start off their conference schedule with a win over the Kansas State Wildcats this Saturday.

Oklahoma appears to be back to their high-octane offensive ways, with Lincoln Riley welcoming in his next star QB in Spencer Rattler.

The Sooners were able to get their work in against Missouri State, where Rattler led the offense to 31 points in the first quarter.

Rattler has huge shoes to fill, with the previous three Sooner QB’s either winning the Heisman Trophy or getting the invite to New York.

The Spencer Rattler era begins for the Sooners.

The last three starters have worked out pretty well 😏 pic.twitter.com/9FAmNmXq0W

Meanwhile, Kansas State is reeling after a 35-31 loss to Arkansas State. The Wildcats made Arkansas State’s receivers look like NFL stars, and will certainly have major problems with the speed and skill of Oklahoma.

Texas started their season with an impressive 59-3 win over UTEP where QB Sam Ehlinger threw for 426 yards and five touchdowns.

This is not a good sign for Red Raider fans hoping to pull off the upset over a Top-10 ranked Longhorn team, who has a strong defensive front to back up their offense.

Texas Tech will need to make this a shoot-out if they hope to stand a chance. Even then, the Red Raider defense will need to play a perfect game in order to stay competitive.

Iowa State suffered a crushing upset at the hands of Louisiana Lafayette last week after coming into the season ranked in the AP Poll.

The Cyclones will now look to bounce back against a competent TCU team in what is easily the closest Big 12 matchup this week in the eyes of the college football handicappers.

ISU QB Brock Purdy will need to play better than his 16 for 35 effort against the Ragin’ Cajuns. Purdy looked far gone from the player who set 18 school records as a sophomore.

In terms of history, TCU has won six straight season openers and 18 straight home openers and will look to continue that streak against a reeling Cyclones team.

Oklahoma State escaped a scare in their first game against the Tulsa Golden Hurricane, squeaking out a 16-7 win.

Starting QB Spencer Sanders went down with an ankle injury, putting the offense into a standstill and forcing the Cowboys to lock down on defense.

The good news is that the defense was able to step up and get the win, stopping Tulsa on all 12 third down plays and holding them to just 278 total yards.

West Virginia comes in without the highest of hopes this season after a sputtering offense held them to a 5-7 record in 2019. However, the Mountaineers looked prolific in their opener against Eastern Kentucky, winning 56-10.

The Cowboys game plan will center around star running back Chuba Hubbard, who is dealing with a brand new offensive line.

Overall, the Cowboys still get the edge in this one thanks to their higher ceiling on defense.

The Kansas Jayhawks began their 2020 campaign with an ugly 38-23 loss to the Coastal Carolina Chanticleers. While it would be nice to call it an upset, it was clear from the first snap that Coastal Carolina was simply the better team in all three phases of the game.

There is simply no excuse for a Big 12 team, coached by Les Miles no less, to lose to a Sun Belt team in such fashion.

Meanwhile, Baylor will be playing their first game this season after a series of postponements to their schedule.

While the Bears don’t have the appearance of a powerhouse, they have not lost to Kansas since 2007 and will likely be in no danger of losing that streak this weekend.