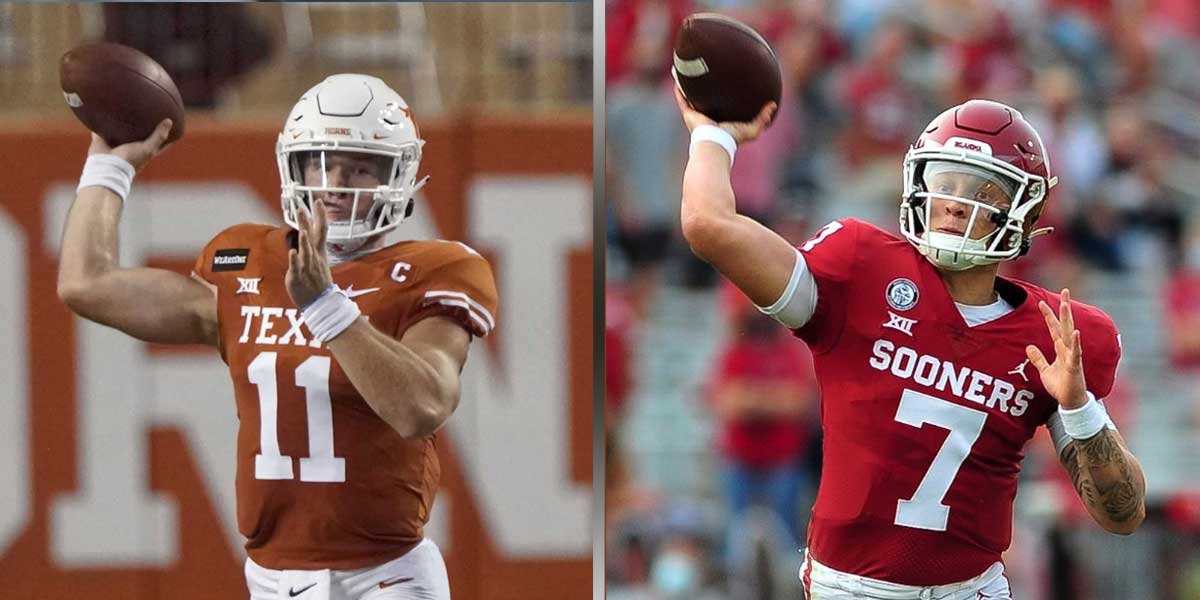 LAS VEGAS – Saturday brings yet another week of College Football Daily Fantasy action with a whole new slate of afternoon games to draft from.

The SEC returns to play this week, bringing with it a slew of talent that is now available on the draft board.

Taking a look at the offerings via online sportsbook and Fantasy sports site DraftKings presents some terrific value at both the top and middle of the auction board.

Breaking the players down into blue-chip picks and sleepers helps DFS players construct the perfect team for this Saturday.

The Big 12 begins conference play this week, with possibly the two best quarterbacks in the conference drawing favorable matchups.

Texas Longhorns QB Sam Ehlinger should be set for another tremendous week after putting up 426 yards and five touchdowns in his first game. Texas faces off against the Texas Tech Red Raiders, who gave up over 500 yards passing to *checks notes* Houston Baptist University.

If Ehlinger is choice 1A than Oklahoma Sooners QB Spencer Rattler is certainly 1B.

Rattler threw four touchdowns in his opening game for the Sooners and draws a great matchup against the Kansas State Wildcats, who were just defeated by the Louisiana-Lafayette Ragin’ Cajuns in their opener. Rattler has an absolute cannon and appears to be another superstar at QB for Lincoln Riley.

The Georgia Bulldogs welcome in quarterback D’Wan Mathis who will look to take over at QB for the Dawgs after Wake Forest Deamon Deacons transfer Jamie Newman opted out of the season.

Mathis is a dynamic dual-threat who should have no problem putting up big numbers against a paltry Arkansas Razorbacks defense. The only issue with this pick is the potential of USC Tojans transfer QB JT Daniels stealing some snaps if Mathis is slow out of the gate.

While Daniels is likely to see some action as well, Mathis as a Superflex pick has great value.

Chuba Hubbard still earns the selection as the best RB in the field even after a disappointing performance against the Tulsa Golden Hurricane last week.

The Cowboys offense struggled when starting QB Spencer Sanders went down early, leading Tulsa to stack the box and focus on Hubbard. Even with the full attention of the defense, Hubbard still put up 93 yards and a touchdown, proving his worth even when things go wrong.

Hubbard goes up against a West Virginia Mountaineers defense that allowed the third-most touchdowns in the Big 12 last year, behind only the Kansas Jayhawks and Texas Tech Red Raiders.

Kylin Hill returns as the biggest weapon for Mike Leach’s Mississippi State Bulldogs after putting up 1,350 yards and 10 touchdowns in 2019. While Leach will likely be implementing a strong passing attack, Hill will still be able to carve up defenses that will be forced to play deeper from the line of the scrimmage.

Hill goes up against an LSU Tigers defense that will not be as nasty as it was last year, and will likely find the endzone multiple times.

Charleston Rambo gets the nod as the best choice at receiver this week as the Oklahoma Sooners go up against the Kansas State Wildcats.

The redshirt junior averaged 17.3 yards per catch in 2019, in a Jalen Hurts-led offense that leaned more towards the run.

Rambo is a blazer who will be Spencer Rattler’s go-to target this season. He scored two touchdowns in Oklahoma’s first game, including a 53-yard bomb where he was five yards clear of the nearest defender.

Trevon Grimes didn’t have the most statistically poignant 2019 season but is slotted for an increased role this year with the departure of other weapons for the Florida Gators.

Gators’ Quarterback Kyle Trask led the SEC in passing in 2019 and will likely choose Grimes as his marquee target this season.

Grimes faces off against an Ole Miss Rebels team that gave up the most passing yards per game in the SEC last year at 278.3.

No matter which team gets the win on Saturday, fantasy bettors have plenty of opportunities to win big on their own with a well-placed DFS team.