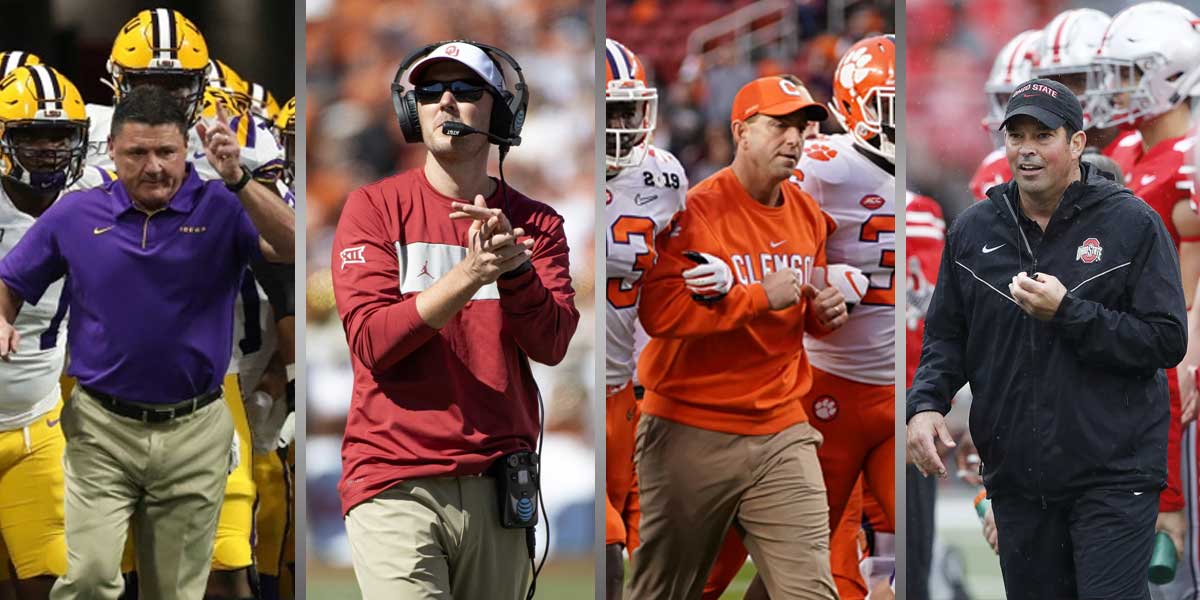 TALLAHASSEE, Fla. - Being bowl eligible is one thing that college coaches love. To have an extra game after a full season is showing everything you worked hard for in the offseason has paid off. But, while going bowling is nice, being apart of the College Football Playoff (CFP) is even more exciting.

With these great matches lined up, US sportsbooks have some interesting thoughts into which teams will advance to the title game.

With both teams undefeated, this game has two explosive offenses that have not been slowed down all season long. Although some of the teams they faced were not highly ranked, going undefeated in any season is a challenge. Both of these teams fought through the adversity they went through each game.

Ohio State ran through the Big Ten putting up a total of 633 points. With huge wins against Wisconsin and Penn State, the Buckeyes averaged 48 points per game. Quarterback Justin Fields is having a season to remember having thrown for 40 touchdowns and passing for over 2,500 yards.

It seems like transferring to Ohio State was a smart move on his part. Fields’ 67% completion percentage stands out as a huge reason why the Buckeyes are getting into the endzone.

With over 1,500 yards rushing on the season, Dobbins is helping to keep the Buckeye defense off the field. One of the most important things he is doing is finishing drives. He has recorded a total of 20 touchdowns this season.

This running game is lethal, averaging 272 rushing yards per game. Keeping Clemson’s offense off the field will be a bonus for Ohio State if it can be done.

Returning to the college football playoffs ranked third after winning it all last year has motivated the Tigers. Clemson Head Coach Dabo Swinney has led his program to the College Football Playoffs five times and has left as champions twice.

This is nothing new to him or his sophomore quarterback Trevor Lawrence who led the Tigers to victory last year against the Alabama Crimson Tide. Lawrence picked up where he left off last year throwing for 34 touchdowns on the season.

With a 68% completion rating, Lawrence has this offense averaging 46 points per game. Because of the teams Clemson has played, this offense has not been talked about as much as other programs.

They are quietly blowing teams out and putting up record-setting numbers. Although last year this team won the title, this year’s team has more experience heading into the College Football Playoffs.

The last time these two teams played each other Ohio State had a game to forget. Clemson kept them from scoring while they put up 31 points. The Ohio State offense was nowhere to be found as they finished with a goose egg on the scoreboard.

With Chase Young on the defensive side of the field for the Buckeyes this time around, look for the defense to try to give Clemson offense problems.

With the over/under set at 63 points, this is the kind of game both offenses love. Clemson (-2.0) is surprisingly favored over Ohio State (+2.0). If Clemson jumps out on Ohio State early as the Wisconsin Badgers did in the Big Ten championship game, there may be no coming back for the Buckeyes.

Jalen Hurts is undefeated against LSU. Before transferring to Oklahoma, Hurts faced LSU twice while at Alabama. Hurts killed LSU in both games with his mobility, having scored a rushing touchdown in both games against the Tigers.

Now at Oklahoma, he has shown that he has a cannon for an arm to go along with the mobility. Throwing for only 2,700 yards in a season at Bama, Hurts has exploded in the Sooners offense throwing for over 3,500 yards this season.

What makes this so impressive is he is leading the Sooners in rushing yards as well with 1,255 yards on the ground. With these numbers, he should be in the Heisman talk.

Averaging 43 points per game, the Sooners offense has a stud receiver in CeeDee Lamb to thank. With 14 touchdowns on the season, the Lamb and Hurts connection is very dynamic.

Sitting as the only team in the playoffs with one loss, the Sooners are a sleeper team that could surprise many.

With the toughest schedule out of all four teams in the playoffs, LSU has earned the right to be ranked number one heading into the CFP. The Tigers are undefeated with huge victories against the Georgia Bulldogs in a neutral site game and against the Alabama Crimson Tide in Tuscaloosa.

There is no question that this team has transformed to become arguably one of the greatest teams of all-time. In its 87 years as a conference, this is the first SEC team to have a 4000-yard passer, a 1000-yard rusher, and two 1000-yard receivers.

Those numbers speak volumes about this offense. LSU quarterback Joe Burrow is shredding LSU records with an outstanding season. Burrow is the only LSU quarterback to throw for over 4000 yards in a single season in LSU history. The Heisman hopeful has this offense putting up 47 points per game averaging over 360 yards.

Burrow has the key weapons around him as well. Wide receivers Justin Jefferson and Ja’Marr Chase both have over 1000 yards receiving.

The pair of receivers reminds many Tiger fans of when they had the Jarvis Landry and Odell Beckham duo. Jefferson and Chase have combined for 30 touchdowns. This duo is tough to stop and Oklahoma should have its hands full.

There are familiar faces in this game with Hurts playing against a former rival. His impact will determine so much. But even with Hurts playing outstanding, the LSU offense may be too much to handle. With both receivers on the field and also an elusive running back in Clyde Edwards-Helaire, the Oklahoma defense will see an offense the likes of which they have not seen all year long.

With LSU (-13.5) favored over Oklahoma (+13.5), betting on LSU seems like a no brainer. This LSU team is clicking on all aspects right now so taking a straight-up bet or picking them against the spread seems to be the way to go.