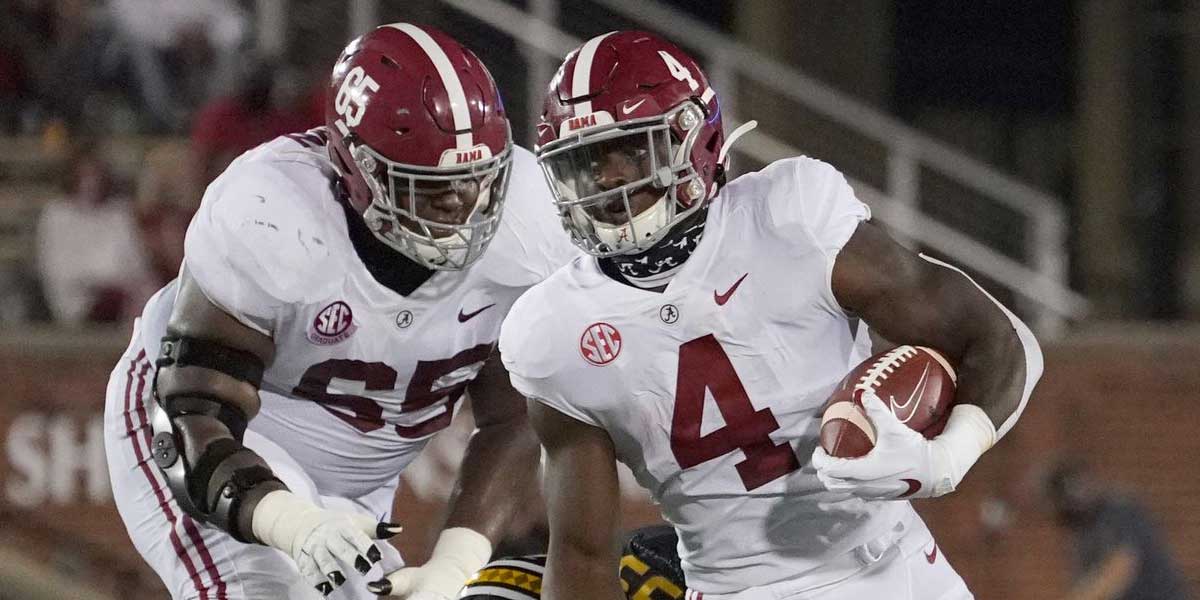 ATHENS, Ga. – Saturday is shaping up to be another great week of college football across the USA, with tons of opportunity for bettors looking to cash in.

With so many games on the schedule, scouring the odds board looking for the best college football lines in an attempt to construct the perfect teaser bet is a must.

For those unaware, teasers are a type of bet available at online sportsbooks, that allow bettors to adjust the point spreads of selected games in a modified parlay.

For this teaser, the 6-point movement will be used on all four of the games chosen, with the total odds being around +250.

The first of the four games for the Saturday super-teaser comes from the Top 10 SEC matchup between the Auburn Tigers and the Georgia Bulldogs at 7:30 p.m. ET

Despite struggling in the first half against Arkansas last week, Georgia is getting a full touchdown from the oddsmakers at home against a strong Auburn team.

Georgia looked rather pathetic in the first half of their game last week as D’Wan Mathis struggled mightily in his first appearance for the Dawgs. Mathis completed just 8 of his 17 passes for 55 yards and one interception before being benched in favor of Stetson Bennett.

The Dawgs were able to get the win, but still hold a ton of uncertainty at the QB position. With transfer JT Daniels now also recovered from injury, Kirby Smart has to decide between three different QBs to take the reigns Saturday.

Meanwhile, Auburn was able to get the win against Kentucky in their first game, albeit with a bit of help from the officials and some costly UK mistakes. Nevertheless, sophomore QB Bo Nix looked capable in the win, throwing for 233 yards and 3 touchdowns.

This game will come down to the Auburn offense versus the Georgia defense and has all the makings of a close, hard-fought battle.

With that in mind, we will be teasing the line towards the Tigers, at +13.

The next piece of the puzzle stays in the SEC, with the Florida Gators taking on the South Carolina Gamecocks.

Former Gator coach Will Muschamp brings his boys down to the Swamp to try and avoid starting the season 0-2 following a gut-wrenching loss to Tennessee.

They will certainly have their work cut out for them, going up against a Gator offense that put up 51 against Ole Miss in their debut, behind senior quarterback Kyle Trask.

Trask threw for 416 yards and six touchdowns against the Rebs, with four of them going to star tight-end Kyle Pitts.

Kyle Pitts is a cheat code.

While the Gamecock defense might be a bit stiffer than Ole Miss, teasing this line down to 11.5 in favor of the Gators is a solid addition to the Saturday betslip.

Staying in the SEC for one more addition as the aforementioned Ole Miss Rebels take on the Kentucky Wildcats.

Both these teams suffered losses to top 10 opponents in Week 1, and now go head-to-head to try to avoid starting the SEC season winless.

While the Ole Miss defense looked porous, the offense under Lane Kiffin showed some real promise. Kiffin often ran a complex double-QB formation that featured both Matt Corral and John Rhys Plumlee on the field at once, which gave the stingy Gator defense some real problems.

Ole Miss put up 35 in their loss, with Corral throwing for 395 yards and 3 touchdowns.

Kentucky is a good team and should be respected as such. However, their offense only managed 13 points against an Auburn team that looked uncoordinated in their first game. They also allowed 29 points to a Bo Nix led offense.

The idea here is that Ole Miss manages to score enough points to keep them in the game against a Kentucky defense that simply does not have the same athletes that Florida had. While Kentucky could still come out ahead, teasing Ole Miss to +12 is a line worth the risk.

The final game of the four-team teaser heads out to the Big 12, where the Kansas State Wildcats face the Texas Tech Red Raiders at 3:30 p.m. ET.

Kansas State heads into this one fresh off their blockbuster upset of No. 3 Oklahoma on the road. The Wildcats were down by 21 in the third quarter before mounting a legendary comeback to take down the Sooners. The win was much needed, as the Wildcats lost in their first game against Arkansas State.

Meanwhile, Texas Tech almost pulled out an upset of their own over the Texas Longhorns, losing 63-56 in an overtime barn burner.

Kansas State enters this one as the slight favorite but is in prime condition for a hangover following their big win.

While the Wildcats did take down mighty Oklahoma, it was more a case of the Sooners making critical mistakes and playing extremely lazy with the lead. Kansas State looked good in the final quarter, but could easily revert back to the team that lost to Arkansas State.

Texas Tech scores seemingly at will on offense but will need to make some tackles in order to stay in this game. With the belief that they have the ability to do so, tease the line to +8.5 in favor of the Red Raiders.

All in all, that completes the college football bet for this Saturday. Regardless of any teaser bets, this weekend is sure to be another incredible gameday across the world of college football.