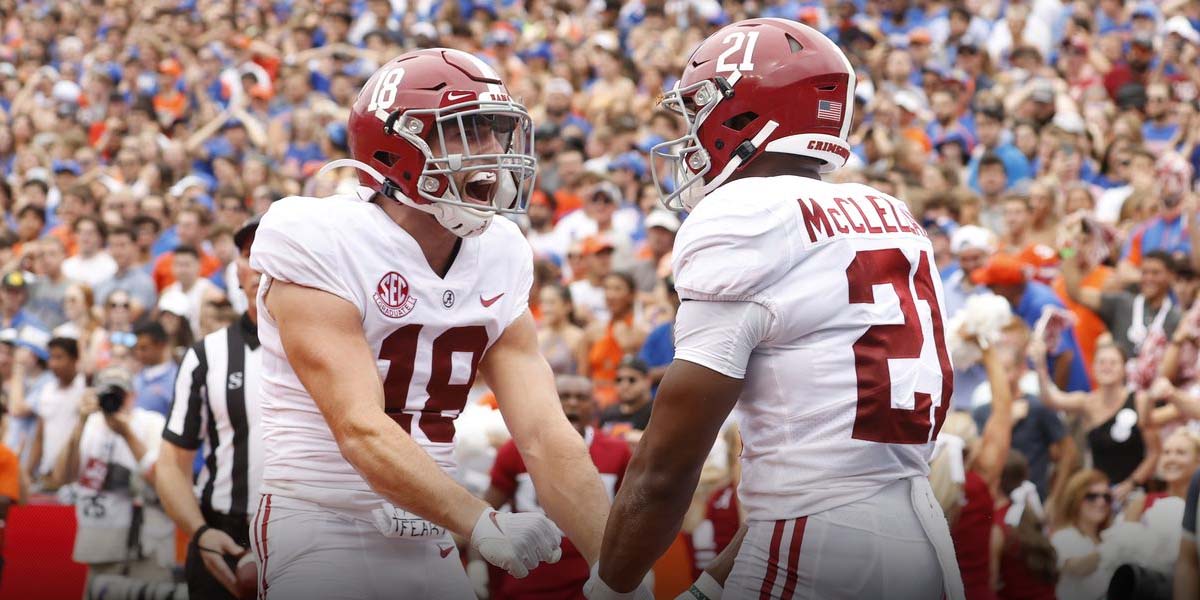 TUSCALOOSA, Ala. – The third week of college football is in the books and many schools proved why they belong in the College Football Playoff following big victories.

The Alabama Crimson Tide played in a nail-biter, defeating the Florida Gators 31-29 on the road.

Alabama defeated arguably the best school on their schedule but will still have a tough road ahead. That being said, the Crimson Tide remain the odds-on favorite to win the National Championship and has still proven that they are the best in College Football.

The Georgia Bulldogs continue their strong start to the season with a 40-13 victory over South Carolina.

With their dominant defense continuing to lead the way, they have allowed only 23 points on the season thus far. Georgia still has to play the rest of the SEC East but have the best roster in the division and are expected to reach the College Football Playoff as a result.

The Oklahoma Sooners struggled offensively and barely defeated the Nebraska Cornhusker with a 23-16 win.

The Sooners still possess one of the best offenses in the nation and one of the best quarterbacks in Spencer Rattler. While Rattler is no longer the Heisman betting favorite (+400) at online sportsbooks, the Sooners are still favored to win the Big 12 and are one of the frontrunners to reach the playoffs.

The Ducks are the frontrunners in the Pac 12 football conference odds (+120) and look poised to reach the playoff for the first time since 2014.

The Clemson Tigers are off to an awful start for the high bar they set in recent years, losing their opening game against Georgia 10-3 and barely defeating Georgia Tech 14-8 this week.

The Tigers still have plenty of time to mature as a program and will still likely win the ACC (-350 odds) but the roster has been concerning early on.

Texas A&M continues to be one of the best college football programs since head coach Jimbo Fisher took over in 2018.

The Aggies still have to play arguably the toughest division in football in the SEC but look ready to contend for a playoff spot this season.

Ohio State has struggled early on this season, to say the least. The Buckeyes won this past week 41-20 but continue to play in close games against inferior competition and haven’t looked dominant as they begin Big 10 East Division play in the coming weeks.

The Buckeyes still look like the best in the Big 10 and odds support this, but will need to improve as the season progresses to reach the playoffs.

Penn State had arguably the most consequential win of the week as they defeated the Auburn Tigers at home 28-20.

This was their second win over a ranked opponent this season.

The Nittany Lions will begin Big 10 divisional play and look ready to knock off Ohio State as the class of the conference and possibly slide into the playoffs as a result.

The Iowa Hawkeyes are the dark horse in the Big 10 and in the college football landscape as a whole.

The Hawkeyes are in the Big 10 West and can build up wins with an easier schedule to reach the Big 10 Championship Game. They have proven early on that they have a roster, especially in the trenches, to compete

The Cincinnati Bearcats extended their winning streak to 12 regular season games with a 38-24 victory against the Indiana Hoosiers, outscoring them 15-0 in the final quarter.

The Bearcats are the best of the group of five but are on the outside of the College Football Playoff looking in.