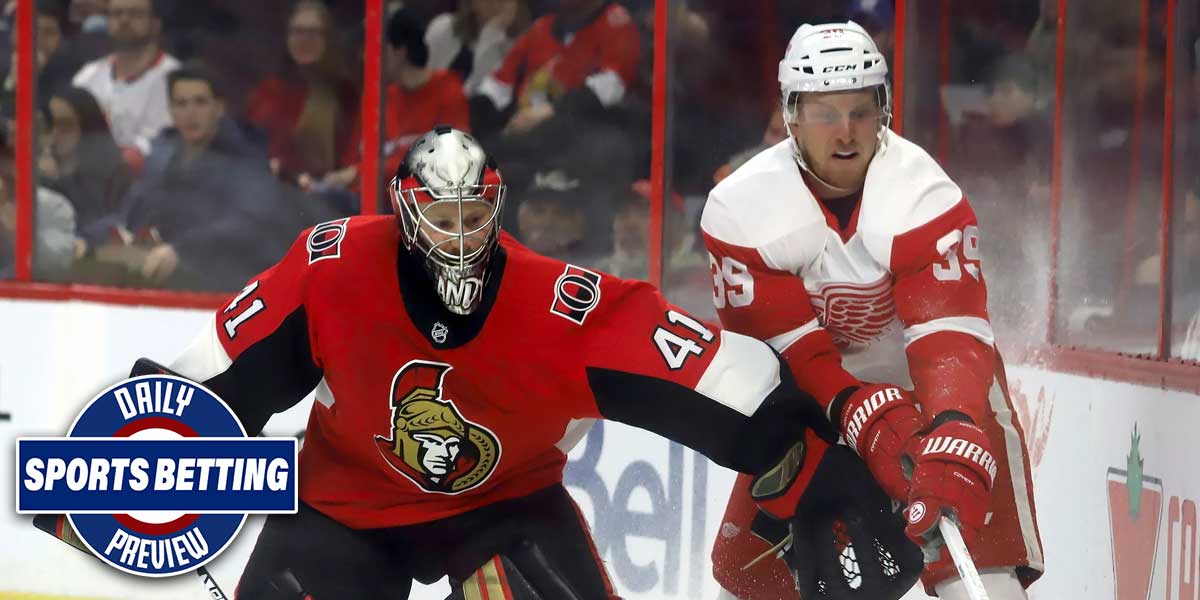 DETROIT – This column covers everything from darts and handball to NBA prop bets, but today, it splits the difference. The focus will be on a big sport, but one that doesn’t get enough action on many of the online sportsbooks – the National Hockey League.

One of the games is between two bad teams with a fascinating storyline and an even more fascinating moneyline. The second is a palate cleanser, a game between good teams to watch after the first one.

No matter the quality of the game, offshore sports betting sites offer dozens of odds and betting lines aside from the typical puck line, over-under, and moneyline.

The visiting Ottawa Senators have a lot of work to do. They enter Detroit with zero wins in their last five games and have fallen well below the .500 mark with a 16-22-5 record. Ottawa has struggled overall, with poor rankings in both goals scored and goals allowed, as they allow nearly .7 more goals per game than they score.

However, the best example of their plight is on the power play. Ottawa is dead last in the league in converting power plays into goals – a truly horrifying sight.

The Senators enter as the favorites (-120) to win against the Red Wings. However, oddsmakers believe this battle will be close, as the puck line for Ottawa (-1.5, +205) is a strong underdog.

Detroit has somehow fared even worse than Ottawa, entering the game with an atrocious 11-30-3 record. The Red Wings are awful, ranked 31st in the league in both goals scored and goals allowed. Also, they allow a comical 1.62 more goals per game than they score.

Detroit has -105 odds to win, and the evenness of this game is a testament to the poor quality of both teams. The numbers seem to indicate that Detroit is a worse team by a significant margin, but Ottawa is bad in unique ways – their inability to capitalize on power plays is crippling – and the Senators enter the game on a losing streak. This one should be interesting.

After that game, a discerning hockey fan might want a palate cleanser – a good game of hockey to bet on and watch. For that, one would have to look to Colorado, where the Colorado Avalanche host the Pittsburgh Penguins. The Avalanche, at 25-15-4, enters the game as a favorite, slightly advantaged over the Penguins, who have a marginally better record at 26-12-5.

The Avs have thrived against tough competition recently, with an 8-1 record in their last nine games against teams with records over .600. Interestingly, however, they are only 2-6 in their last eight games as a favorite, which is telling.