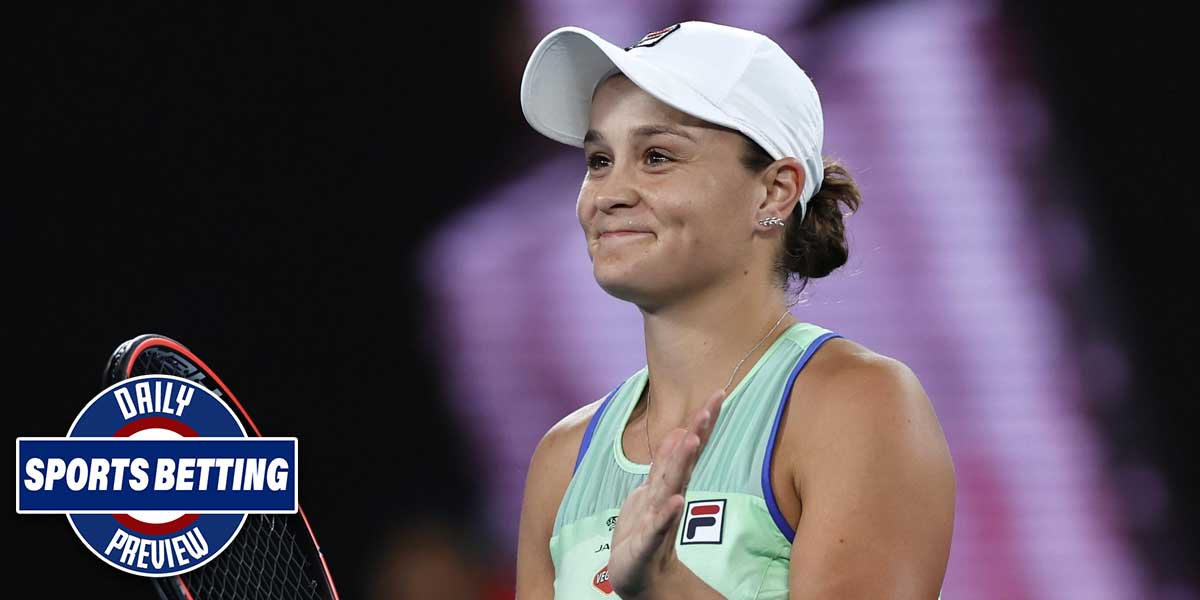 MELBOURNE, Australia – As the second week of the Australian Open is underway, bettors are presented with a reduced bracket to choose from. Meanwhile, the night of sports betting is littered with multiple NHL games for bettors.

On the ladies’ side of the event, six of the top-10 ranked players lost this weekend, causing online sportsbooks to scramble their futures odds to win the Australian Open.

With eight females left in contention, the tennis players have only three more matches to win in order to be crowned the champion.

On the top half of the bracket, the World Number 1 in Ashleigh Barty (+275) is positioned opposite of Simona Halep (+275), who are the favorites to win the entire thing.

They must get past Petra Kvitova (+450) and Anett Kontaveit (+2000), respectively in order to reach their semifinals bid.

Playing in front of her home crowd, she potentially has the easiest route, as her semifinals opponent would be the winner of Sofia Kenin (+900) and Ons Jabeur (+3300).

For Halep, the former World Number 1 has yet to win the Australian Open but lost in the finals during her 2018 campaign. Her potential semifinal matchup will be the winner of Garbine Muguruza (+550) and Anastasia Pavlyuchenkova (+1200).

Though odds are in favor of the two favorites, none have seen as much movement on the Australian Open betting board as Muguruza. Opening as a +3200 underdog, Muguruza is now the fourth-most favored female.

The matches for the Australian Open will resume at 7 p.m. EST tonight when Kenin and Jabeur start off the single’s events. Barty and Kvitova will also play in the Rod Laver Arena after the conclusion of the first game.

Though betting lines on these matches exist at various online betting sites, bettors can also hedge any futures bet with the use of live betting platforms.

Betting On The NHL

As the ladies are starting their Tuesday in Australia, the Monday night in America will have many hockey betting odds. One of the most interesting comes in the form of the Dallas Stars and Tampa Bay Lightning Game.

Tampa Bay (-1.5, +185) is an underdog on the puck line, but are still the favorites to win the game. Sitting at -127, bettors are given a slight disadvantage here. After beating the Winnipeg Jets by six goals, the momentum has stopped for both teams, as neither has played in over a week.

In their impressive 8-2 last ten game span, however, the Lightning were holding opponents under 1.7 goals per game. In the heart of the road trip, look for the Lightning to begin their slight record regression.

Dallas (+1.5, -215) will look to keep the game close. Riding a two-game losing streak (despite going 7-3 over their last 10), the Stars had had enough of a break since being ripped apart by the Minnesota Wild.

Sitting just on the verge of being a division-clinching or wildcard berthing team, the Stars could also find themselves well out of the playoffs. With this lack of confidence, bettors should take the Lightning (-127) over the Stars (+115).

In their first meeting on the year, extra time on the ice was required. The Stars ended up taking the match on the road, but don’t be surprised to them hold down their home ice as well.

No matter which way a bettor takes this line, betting the over on the over-under seems like a near requirement. In their last 17 games against each other, at least six goals or more were scored in 15 of them. This dates back to 2014 and seems to always be the trend in the matchup.

The Stars and Lightning drop the puck at 8 p.m. EST on NBCS.