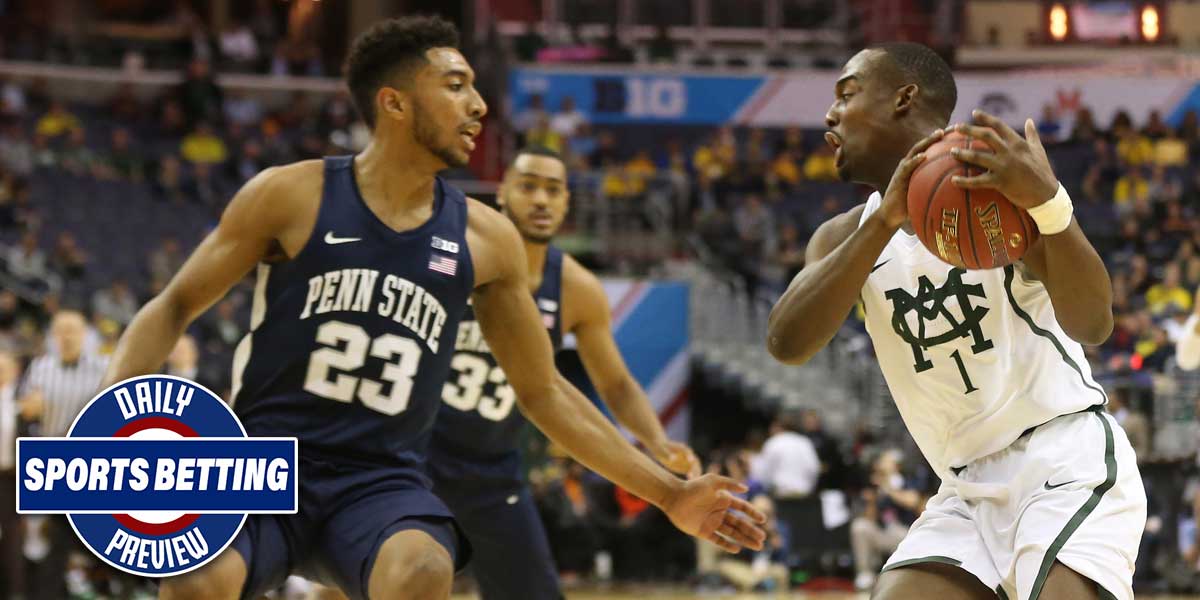 EAST LANSING, Mich. – The number 22 ranked Penn State will test the validity of their streak against the number 16 ranked Michigan State in tonight’s Big Ten battle.

Bettors and sports fans will also see the Vegas Golden Knights traveling to Tampa Bay to face off against the Lightning. However, the majority of betting action is sure to be placed on the first night that Zion Williamson faces off against Giannis Antetokounmpo.

As the Pelicans host the Bucks, a lot of eyes are on how Zion will fare against the reigning league MVP in Antetokounmpo. As the Bucks reign on top of the NBA world, they are the overwhelming favorite tonight at -260 to the Pelicans +220.

Props surrounding Giannis offer sports bettors a few interesting plays. If he can put up 25 points or more in a Milwaukee win, bettors are given a high price tag, (-238) but this comes with high probability. Additionally, bettors could break down Antetokounmpo’s stats even further and wager on six assists or more and a Bucks win (-112).

Giannis is currently averaging 30 points per game – second in the league – and he is also bringing in 5.8 assists each night.

Zion will be going into his seventh game this season and so far, has managed to offer 19.5 points per game and 7.7 assist on 61.5% shooting from the field. The props surrounding Zion’s play tonight are 20 points or more in a NO win (+305). However, if a bettor really believes in Zion, they could possibly cash in big on 30 points or more and a NO win (+975).

Opening odds have the Michigan State Spartans as the favorite (-400) and the Penn State Nittany Lions (+300) as the underdog. Penn State is currently on a four-game win streak but sports bettors don’t expect that to continue against Michigan State.

The Spartans have been successful thanks to the play of senior guard Cassius Winston. This season, Winston is averaging 18.2 pts on 43.4% shooting from the field, including an impressive 39.5% from deep.

These numbers increase for home games, as he has a 45.3% field goal percentage with a scorching 44.3% from the 3-point line. He has also shown the ability to run the offense averaging 5.7 assists (increases to 6.3 at home).

Sports bettors who are betting on college basketball are expecting another solid outing from Winston as the Spartans are 8.5-point favorites tonight.

In a cross-conference clash between the Tampa Bay Lightning and the Vegas Golden Knights in the NHL, the Golden Knights are +150 on the moneyline. Walking into this game off the heels of a 3-0 victory over the Nashville Predators, the Knights are also favored to cover their puck line (+1.5, -165).

This makes the Lighting the favorites (-165) but bettors can find incentive to play them on the puck line, (-1.5, +145) if they have the faith. The Lightning have been hitting on all cylinders, boasting an impressive 32-15 record that has them at 2nd in the Atlantic Division.