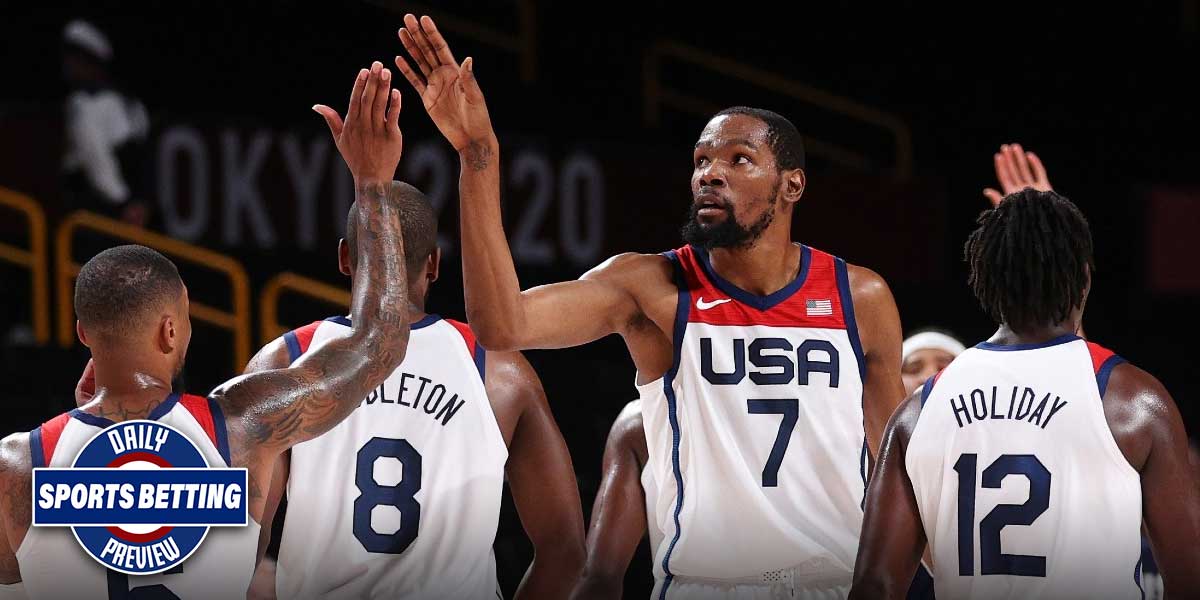 TOKYO – The top two basketball teams in the world will play each one another when Team USA plays Spain in the Olympic quarterfinals.

Also, the MLB continues its season and Olympic weightlifting nears its close with the 109kg weight class having its medals awarded.

The United States and Spain will face each other in the quarterfinals of the Olympics as one team will see their run end. Online sportsbooks are giving the USA short odds as they are -800 on the moneyline and double-digit favorites on the spread.

The United States opened their Olympic campaign with a loss but went on to win the next two games by a combined 89 points. However, in this game between the two highest-ranked teams in the world, a blowout is much less guaranteed. With that said, Spain hasn’t looked phenomenal by any means as they also lost a round-robin game and were only able to win their other two by a combined 21 points.

The United States clearly has the most talented team in the Olympics and should be able to cover this spread, but the team has had their fair share of struggles and inconsistencies in which a team like Spain would take advantage of.

The New York Yankees will host the Baltimore Orioles on Monday in a game where the total simply may be set too high.

The number is likely inflated due to the pitching matchup, but the offenses have been bad enough to justify backing the Under.

Those betting on the MLB should note that the Orioles are the second-worst team at the plate in terms of wOBA and also rank in the bottom five in wRC+, BA and OBP over the last 30 days. In that same span, the Yankees have the second-lowest SLG, second-lowest ISO and third-lowest BA.

Jorge Lopez has a 6.19 ERA and 1.68 WHIP this season and Andrew Heaney, who will make his Yankee debut, has a 5.27 ERA and 1.31 WHIP, but each offense has been bad enough to overlook these numbers.

Lastly, the Yankees are averaging just 3.1 runs per game over the last 10 contests while the Orioles have averaged 4.4 runs in their last 10.

Simon Martirosyan is listed as the favorite to take home the 109kg weightlifting gold medal over Akbar Djuraev. The two are the only athletes with odds short of +1600, showing that Olympic betting sites believe it is a two-man race.

Martirosyan is the current world record holder for the weight class in total with 435kg and has won both of the World Championships at 109kg in 2018 and 2019. He also held the world record in the snatch at 199kg until it was recently broken by a single kg in April.

Djuraev has been steadily improving over the years, but at this point, there’s enough evidence to prove that he just isn’t at Martirosyan’s level yet. Djuraev will likely need to set new personal bests in order to win the competition and while it’s possible, it’s safe to say it’s not the most likely outcome.