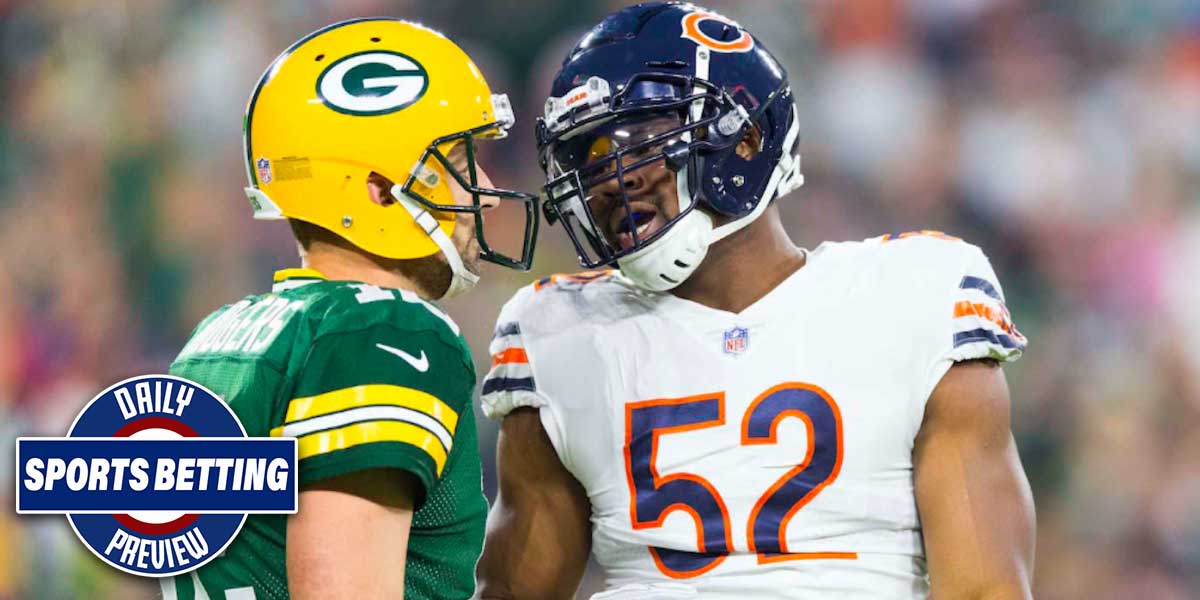 TALLAHASSEE, Fla. – The start of the NFL season is upon us, as the Green Bay Packers travel to Chicago to take on the Chicago Bears. This is only one of the many betting opportunities today, but with the NFL season commencing, we couldn’t leave it off our list.

The MLB also will see many games of action – a dozen to be exact – but none provide the potential playoff excitement of the Chicago Cubs and Milwaukee Brewers. The Cubs have found themselves positioned in the 2nd and final NL Wild Card spot, but Milwaukee is one of the four teams within five games of that playoff spot.

Also, the US Open is nearing its conclusion, as the semifinals for the ladies takes place today. American Serena Williams is the favorite to win the tournament and has been the favorite since before the draw took place. Her semifinal matchup against Elina Svitolina will be her real test, as a victory here should see her hoisting the trophy on Saturday.

Betting on the NFL Opener

With an NFC North showdown to kick off the season, the transfer of power in the division may become clearer. The Bears won the division last year but the Packers and Minnesota Vikings had split the previous seven division titles.

Now, the Bears (+210) and Packers (+210) are tied for the best odds to win the NFC North, so this matchup today – which begins at 8:20 pm EST on NBC – will impact these odds drastically moving into next week.

For the game today, the Packers (+155) are the slight underdogs on the road against the Bears (-175), who are three-point favorites. With a total of 46 points set for the game, the prediction is that the Bears will score around 24.5 and the Packers will be just shy at 21.5

A Week 1 matchup to open the season against division rivals is always a tough betting situation. Instead of focusing on the straight wagers, this game has a certain prop bet that stands out more than others. Mitch Trubisky to completing 22 or more passes (-115) is a bet worth taking.

In three career games against the Packers, Trubisky has averaged 21.33 completions per game but with another year of experience in that offensive and having to go against the Packers defense that let up an average passing rating of 100.9 (fifth-worst) last season, this mark should be an easy target.

The NL playoff spots are up for grabs, as a half-dozen teams are within 7.5 games of each other. September marks the last month of the regular season, as most teams have about 20-25 games left to stake their claim.

The Cubs could lose their three-game lead over the teams that are out if they fall to the Brewers today at 7:10 pm EST.

Chicago (-120) is the favorite, as Milwaukee (EVEN) isn’t far behind as the underdog. The run line is in favor of the Cubs (-1.5, +135) but covering this may be more of challenge for the Cubs, who will be on the road.

Jose Quintana will get the start for the Cubbies and in Quintana’s last six starts, he has only allowed 8 earned runs on 35.2 innings pitched. This 1.33 earned run average per game helps bettors who want to take the under in the Cubs-Brewers game (9.5).

For the Brewers, Chase Anderson is getting the nod, who has been wildly inconsistent as of late. In Anderson’s last 13 starts, he has allowed 32 runs, but 15 of those game in two of his last three appearances. The right-hander has only found himself recording six full innings pitched in his last 15 games, so the Brewers will definitely have to rely on the bullpen early.

Both of the semifinal matches take place for the US Open today. The first match is between Elina Svitolina and Serena Williams and takes place at 7 p.m. EST.

In the five previous matchups, Serena has taken the victory but the most recent match (in the Olympics) was won by Svitolina in two sets. In fact, in all matchups but one, the winner was determined with only two sets making the 21 games on the over/under an interesting proposition, as even the 3-setter was only 24 games.

These two haven’t met in three years, but Williams (-285) is still the heavy favorite over Svitolina (+225). That won’t stop us from taking Svitolina with the odds, as her play as of late should pose as a problem for Williams.

If hopping on the moneyline seems too risky for a bettor, a better consideration might be at the game line, which is 4.5 games in favor of Serena.

The match that will take place upon the conclusion of the Williams-Svitolina match is Belinda Bencic against Bianca Andreescu.

Andreescu has only lost four matches all year, which comes as no surprise that Andreescu (-150) is the favorite. Her cross-court strokes could prose a problem against Bencic (+120), who is known for her returns – something that will need on point to take down the strong-serving Andreescu.

Don’t be surprised for this battle to be close, as indicated by the spread of 2.5 games at several US sports betting sites. Our focus will be on live betting though, as the first set is likely to be nine games or less.