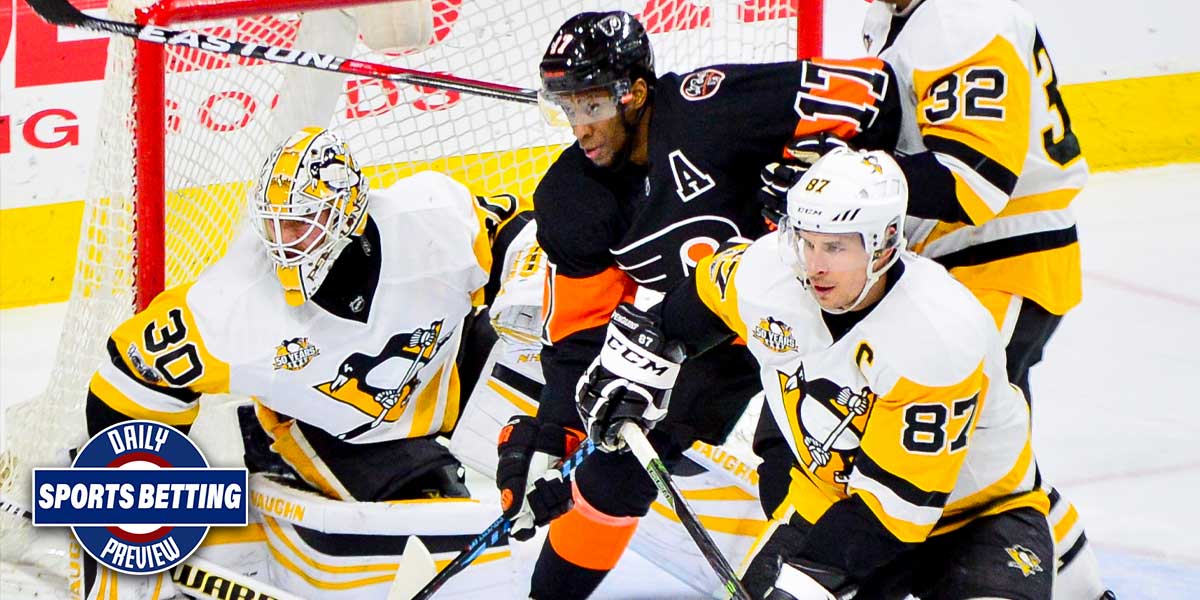 Today’s edition starts off with a look at the first game of the NHL season as the Pittsburgh Penguins take on the Philadelphia Flyers.

Finally, the Sony Open kicks off Thursday at 7:00 a.m. EST, so golf bettors might want to place their bets today.

The NHL is back for the 2021 season, and the first game of the day pits the Pittsburgh Penguins against the Philadelphia Flyers.

Pittsburgh and Philadelphia were roughly similar teams last season, and they are projected to have a very even matchup this season.

On the moneyline, the Flyers are a very minor favorite at home. The matchup opened with the Flyers as a bit more of a favorite than they are right now, at around -130 on most online sportsbooks and betting sites.

However, the line has been bet to the point that it is at right now, as Penguins backers flooded the books.

In the last eight times these teams have clashed in Philly, the Penguins have come out on top in six.

This line also has moved towards the Penguins side of the bet over time, and it seems clear that bettors favor the Penguins if they are getting points or a generous moneyline.

This matchup is the first of the upcoming NHL season, and will air at 5:35 p.m. EST.

NHL betting enthusiasts are no doubt glad that the season has begun, but it is perhaps frustrating that the first matchup on the boards is a tough one to handicap.

Texas Tech and Texas face off in a college basketball matchup that features a rivalry game between two top 25 teams. Texas Tech enters this game as the 15th ranked team in the nation, while Texas clocks in at fourth.

The game will be played @ Texas, which is enough to give them a mild advantage on the betting odds.

Texas Tech and Texas appear to be quite close to evenly matched based on these odds, which are well within the range of odds that are influenced by homecourt advantage.

Indeed the spread is within one possession, and that’s exactly the kind of spread that can be generated by evenly matched teams when home/away is taken into account.

Texas Tech has a record of 10-3 on the season, and has performed well on the road so far, with a 2-0 road record.

However, they have not done very well against the spread overall, with a 5-8 ATS record in their 13 games played.

This matchup has been very exciting in recent years, as the underdog has covered the spread in six out of the last eight meetings between these two teams.

As a part of that, the road team is 5-1 against the spread in the last six meetings between these two teams.

If these trends hold up, it could be a wise decision on the part of college basketball betting enthusiasts to take a long look at Texas Tech in this matchup.

The PGA’s Sony Open kicks off at 7:00 a.m. on Thursday so bettors might want to take a look at the futures odds now.

The Open takes place on the Waialae Country Club golf course, which has an overall par of 70, and a length of over 7000 feet.

At the top of the odds boards are some names that most PGA bettors will be very familiar with, Webb Simpson and Collin Morikawa.

Morikawa won the PGA Championship in 2020, and is currently ranked fifth on the PGA Tour. It’s honestly surprising that he’s not first on these odds boards. However, Webb Simpson is no slouch. The eighth ranked golfer on the tour edges out Morikawa at the top of the odds for the PGA Sony Open.

Tied with Morikawa is Daniel Berger, and the pair are followed by Harris English and Sungjae Im to round out the top contenders.

Berger is ranked 13th on the tour, while English and Im clock in at 17th and 18th respectively.

Morikawa could be underrated at the moment, given his status on the tour, and his blistering hot 2020 season.

Golf betting followers will want to get their bets in early, especially if they live on the west coast, given when this tournament starts.