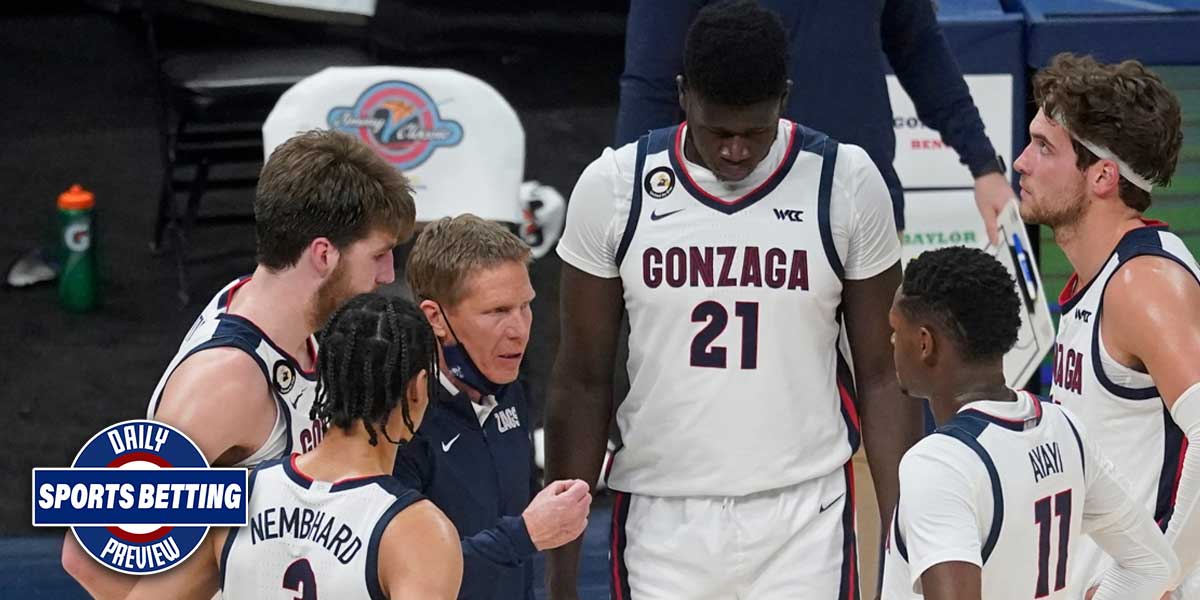 This edition of the Preview starts out with an examination of some prop bets on Gonzaga’s matchup against Pepperdine.

Then, Arsenal takes on Crystal Palace in Premier League action. Finally, the Vegas Golden Knights take on the Anaheim Ducks in what should be a solid NHL matchup.

Gonzaga, the number one team in college basketball, is set to play a sleeper of a matchup against Pepperdine on Thursday night.

In the context of such a lopsided head to head matchup, many bettors will turn to prop betting opportunities on this matchup.

For example, Gonzaga may be -4500 on the moneyline, but to be the first team to 20 points they are -900, which is five times more profitable.

The question regarding this wager is whether or not one thinks Gonzaga is five times less likely to be the first team to 20 than they are to win the game.

The odds imply that outcome, but this could be a decent value wager.

The first to 10 point wager is a bit riskier, mostly because the odds on it are roughly the same as the first to 20 wager, but it carries half the sample size.

This means that of all the wagers one could make on Gonzaga, the first to 20 points seems like the most profitable when compared to the potential risk. Of course, it’s highly likely that all of these wagers end up cashing, given that Gonzaga’s side of them is favored heavily.

That said, the first to 20 wager deserves special attention from college basketball betting buffs who wish to wager on this matchup.

The Premier League brings a matchup between Arsenal and Crystal Palace to the table on this fine Thursday.

Arsenal might be a far bigger name than Palace, but the two teams are not far removed from each other in terms of performance this season. Crystal Palace enters this matchup at 13th place in the Premier League, while Arsenal boasts a spot only two places higher, at 11th.

Palace is only one point behind Arsenal on the table, which means that if Palace manages to win this game, they will jump ahead of Arsenal in the standings.

Arsenal has been on a downward spiral for the last few months, but they have gotten a bit back on track recently, with three straight wins in the Premier League. Palace, meanwhile, has only won one of their last five games.

Arsenal has a very good shot to win this matchup, with -170 odds to take the win on the three-way moneyline.

Arsenal’s -500 odds on the no draw moneyline make them a huge favorite over Palace in the straight-up matchup.

A draw seems like a plausibly likely outcome in this match, although Arsenal’s recent run of good form means that they are clear favorites. Soccer betting enthusiasts will likely end up laying the favorite in this compelling Premier League matchup.

The NHL is back, and of all the games set to be played on Thursday evening, only one of them features a team with odds shorter than +1000 to win the Stanley Cup.

That team? The Vegas Golden Knights, who are one of four major favorites to win the Cup this year.

The Golden Knights are tied for the third-best odds to win the Stanley Cup, and today, they face off against the Anaheim Ducks.

The Golden Knights are -220 favorites over the Ducks, who are regarded as one of the worst teams in the league.

The Ducks have +9000 odds to win the Stanley Cup and are coming off of a season in which they were the third-worst team in the Western Conference.

The Golden Knights are certainly favored in this matchup, but one wonders if they aren’t bigger favorites in reality than they are on the odds boards.

NHL betting fans will want to take a long look at the Golden Knights in this game, as they seem primed to come out of the gate with a win against this level of opposition.