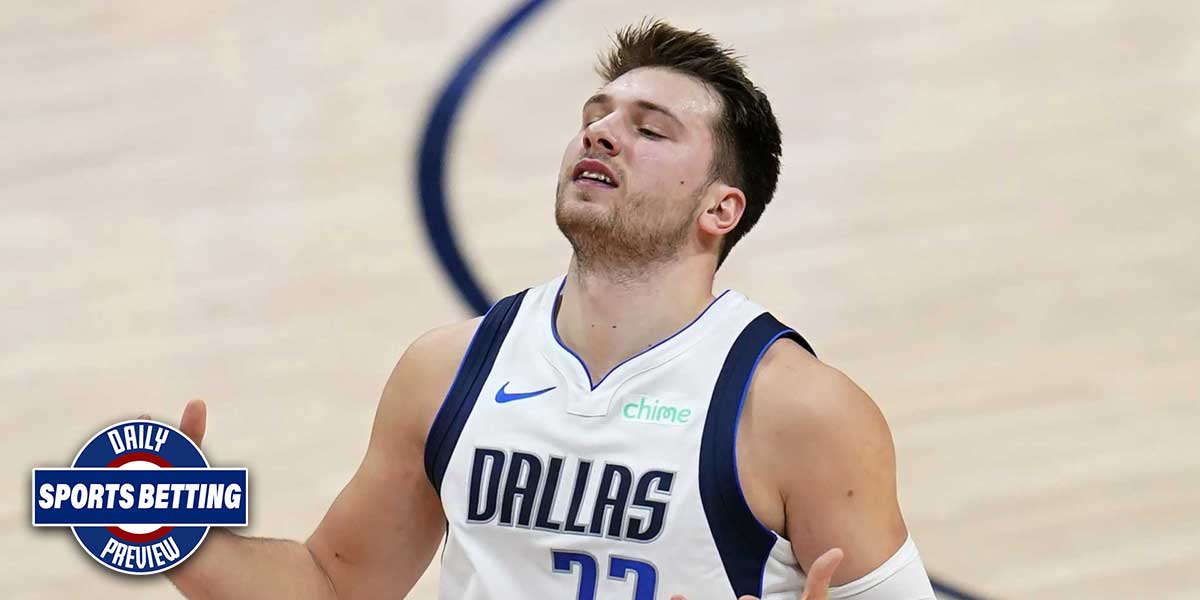 First up, the Dallas Mavericks take on the Milwaukee Bucks in a battle of MVP frontrunners.

Then, in the Bundesliga, Union Berlin faces off against Bayer Leverkusen. Finally, the LCS Lock In tournament kicks off the NA League of Legends scene for 2021.

There’s a lot to cover, so let’s dive right in!

Luka Doncic of the Dallas Mavericks is currently the frontrunner for the NBA’s coveted MVP award.

Doncic is putting up ridiculous numbers, averaging 27.4 points, 9.6 rebounds and 8.3 assists per game, as his Dallas Mavericks boast a 6-4 record.

Intriguingly, however, the defining characteristic of the Mavericks has been defense, as they boast the second best defensive rating in the entire NBA, while the offense is only around 16th in terms of efficiency.

The Mavericks face a tough test in the form of the Milwaukee Bucks, helmed by Giannis Antetokounmpo, the reigning NBA MVP. Antetokounmpo currently has +500 odds to win the MVP once again this year, and only Doncic, at +400, is ahead of him.

The Bucks enter this matchup as six point favorites on the spread, which is intriguing not only because it is an even number, but because it is within only a few possessions.

The Bucks are 8-4 overall, with a 5-1 home record, although their performance against the spread is a bit worse. ATS, the Bucks are 6-6, with a 4-2 home record.

The Mavericks, meanwhile, have a 6-4 overall ATS record, with a 4-3 ATS record on the road. It’s worth noting that the Mavs enter this game on a four game streak of covering the spread.

Remember the note earlier about the Mavs’ defense? It seems like that might be an actionable wagering tip - the Under has hit in six of the Mavs last eight games.

The O/U line for this matchup is set at 228.0 points, and it could be a good opportunity to take the Under in this matchup, before other NBA betting fans start realizing how good the Mavs are defensively.

The Bundesliga is home to a solid betting opportunity on Friday as Union Berlin faces off against Bayer Leverkusen.

Both of these teams are in contention for Champions League slots, and games like this could end up being the deciding factor at the end of the season.

A draw seems like a very possible outcome in a matchup between teams as evenly matched as this, with +245 odds. Bayer Leverkusen are the nominal favorites with +120 odds, while Union Berlin’s odds to win the match are fairly close to the odds of a draw at +230.

The no draw line favors Leverkusen at -170 odds, while Union Berlin clocks in as +130 underdogs.

It is worth noting that Leverkusen has been on a bit of a slide recently, losing two of their last three Bundesliga matches, and fighting to a draw in the third.

Meanwhile, Union Berlin has a record of two wins and one draw in their last three matches, which could be indicative of form entering this clash.

Berlin, as the underdogs, could be a solid value play considering Leverkusen’s form as of late, and soccer betting enthusiasts should take a long look at this matchup.

The LCS’s Spring Split is still a ways away, with a start date of February 5th, 2020, so to fill this offseason time, the LCS 2021 Lock In is a great way to get familiar with NA League of Legends in 2021.

The Lock In is a round robin tournament between the teams participating in the 2021 Spring Split of the NA LCS.

The NA LCS had a tumultuous offseason, which means that many of these teams will be fielding rosters that are dramatically different from their 2020 editions.

Five matches take place on Friday and the tournament kicks off with a matchup between 100 Thieves and TSM that is surely worth the attention of esports betting enthusiasts.

TSM had one of the most tumultuous offseasons in recent memory, losing Bjergsen and Doublelift, longtime anchors of the team, and two of the best players in the regions.

Bjergsen stayed with the team in a different capacity - he is now the head coach of TSM - but replacing his on-rift presence will be difficult to do.

TSM brought in PowerOfEvil in an attempt to replicate the magic of Bjergsen’s original transfer, and they are still favored in this matchup over 100 Thieves.

100 Thieves, meanwhile, only brought back one player from their 2020 squad, the top laner Ssumday.

They acquired four of the players from 2020’s edition of the Golden Guardians: Huhi, Damonte, FBI and Closer, and those four will make up the starting lineup along with Ssumday.

This lineup should make 100 Thieves a genuine competitor in the LCS this year, and they might be underrated given the way this matchup is handicapped on the sportsbooks.