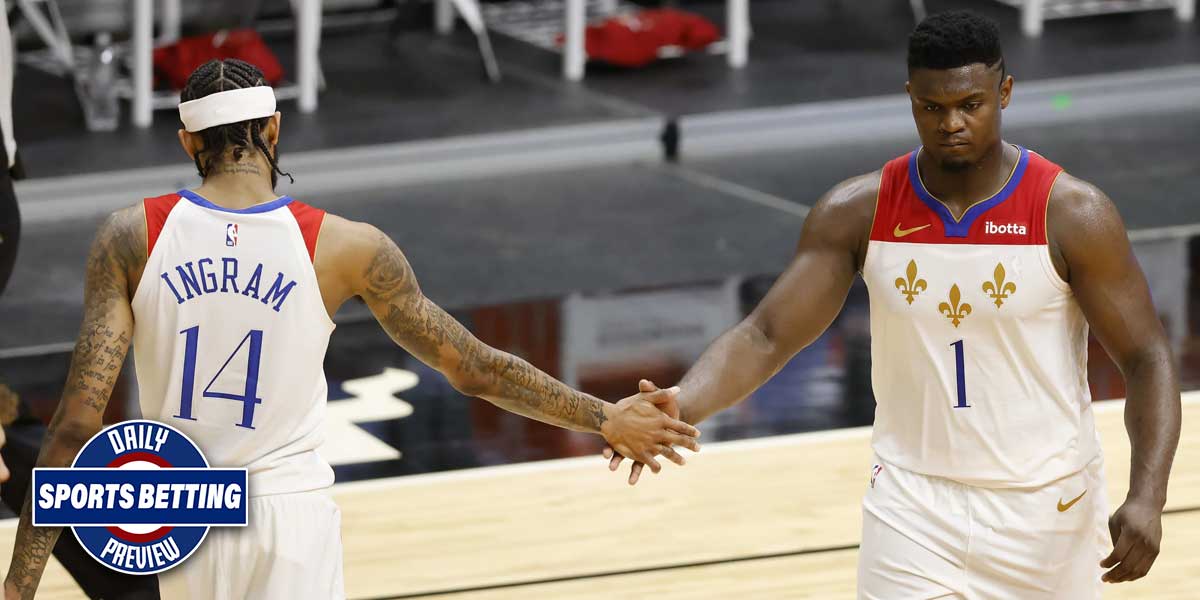 LAS VEGAS - Welcome to this Tuesday edition of the Daily Sports Betting Preview!

This Preview kicks off with a look at the matchup between the New Orleans Pelicans and the Utah Jazz. Then, the Preview examines the college basketball matchup between Alabama and LSU.

Finally, in the NHL, the Washington Capitals battle the Pittsburgh Penguins.

The New Orleans Pelicans enter this game with a record of 5-7, and what sets them apart from other teams in the league is their low pace of play.

The Pelicans play with the 25th fastest pace in the league, with their games averaging 98 possessions for each team. They face off against the Utah Jazz, who also play the game at a glacial pace, but are a better team overall.

They play the game about as slowly as New Orleans does, with the 24th fastest pace in the league, at 98.5 possessions.

The Pelicans are six-point underdogs on the spread, which is partially influenced by the expected low pace of the game.

However, it is worth noting that the six points the Jazz are favored by is fairly close to their net rating of +5.2 combined with the Pelicans net rating of -1.0.

In other words, the NBA sportsbooks seem to have put this line exactly where it should be for this matchup.

Given the glacial pace that both teams play at, it’s no surprise to find the Over/Under line for total points at a relatively low position as well.

Intriguingly, the Over is 6-1 in the Pelicans’ last seven games, while the Under is 4-0 in the Jazz’s last four games.

This matchup provides ample opportunity for NBA betting enthusiasts to find some value.

Alabama and LSU face off in SEC play as the 16th ranked Crimson Tide look to vanquish the unranked Tigers.

The Tide enter this matchup as favorites, with an 11-3 record for the season, and an impressive 9-4-1 record against the spread. The Tigers, on the other hand, are 10-2 on the year, with an 8-0 home record that will be put to the test in this matchup.

Against the spread, however, LSU has a record of 5-7 overall.

LSU is favored on the spread, and the wager will vary depending on which sportsbook is being used.

LSU is playing at home, and that seems to be a big factor in this matchup, but they have achieved roughly similar results to Alabama this season.

The Crimson Tide enter this matchup on a huge ATS winning streak - they’re 7-0 ATS in their last seven games. That said, in the last five matchups between these two teams, the home team has covered the spread four times.

College basketball betting fans will have a lot of great opportunities this year, but this matchup is one of the best.

In effect, LSU is battling for a ranked spot, and they are slightly favored to win this matchup and stake a claim on it.

The return of the NHL means the return of classic matchups like Capitals vs. Penguins, and that exact matchup is on the table Tuesday.

The Caps and the Pens played a few days ago, with the Penguins taking the win over the Capitals, 4-3.

That win was the first win of the season for the Pens, and they’ll look to repeat that performance as they are currently 1-2. The Capitals, who fired coach Todd Rierden at the end of a disappointing 2020 season, are looking to improve on last year’s dismal playoff exit at the hands of the New York Islanders.

To do so, they’ll want to start by taking at least one of these games from the Penguins - and they’ve already lost the first one.

The Caps are underdogs on the moneyline, which means they’ll be getting the benefit of the puck line, on which they are heavily favored.

The Capitals on the puck line isn’t a tough bet to make, as -205 is not particularly prohibitive, and they’ve shown an ability to hang with Pittsburgh even while losing.

Regardless, NHL betting fans have a lot of solid wagers on the table for this matchup.