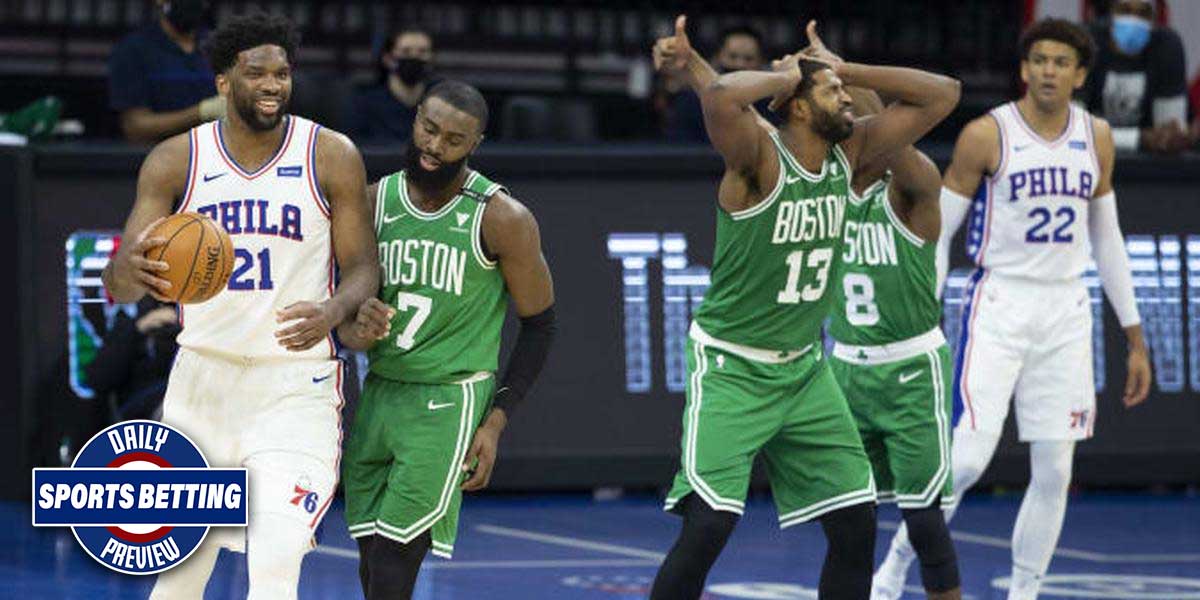 Today’s edition kicks off with a look at the matchup between the Boston Celtics and the Philadelphia 76ers.

Then, the Preview takes a gander at a solid NHL game as the Arizona Coyotes face off against the Vegas Golden Knights. Finally, Wolverhampton Wanderers host Chorley in the FA Cup, a lopsided matchup to be sure, but one that could provide value to soccer bettors.

The Boston Celtics have struggled with getting their entire team on the court this season, and those struggles are evident in several of their losses.

Tatum will miss this matchup against the Philadelphia 76ers due to testing positive for COVID-19, which is a heavy blow for the team.

The Sixers have had similar COVID struggles, but they’ve handled them with aplomb, and sit in first place in the Eastern Conference with a 10-5 record.

The Celtics, due to a combination of missing Jayson Tatum, being on the road, and the Sixers having a better record, are fairly significant underdogs in this matchup.

One thing to note about the Sixers is that they’ve had most of their games at home, and they’ve been elite when doing so.

The Sixers are 8-1 overall at home, and 6-3 against the spread when playing at home, while losing four of their six road games this season.

Incredibly, this discrepancy continues a trend from the 2020 season, in which the Sixers were dramatically better at home vs. away.

This is certainly worth keeping an eye on, as the core of the Sixers team remains unchanged.

To sum up, the Celtics will be missing their best player, and visiting a Sixers team that is outrageously elite at home, and mediocre on the road.

Even at -190, the Sixers moneyline could be very appealing to some NBA betting enthusiasts.

The Golden Knights enter this matchup at 4-0, while the Coyotes clock in with a record of 1-2-0-1.

The puck line is an intriguing wager in this matchup, given that the Golden Knights have been pretty good on it so far.

They’re a genuine favorite, and it doesn’t seem out of the realm of possibility that they cover this spread, and they’re getting solid odds on it.

Either way, this matchup features some interesting betting wrinkles for NHL betting enthusiasts.

The FA Cup provides opportunities for teams like Chorley to play against Premier League sides, and it’s a miracle that the spread for this matchup is even remotely close.

For those unfamiliar with the FA Cup, it involves all the levels of English soccer, and as such, sometimes generates matchups like this when the brackets fall in the right way.

Chorley F.C. plays in the sixth tier of English soccer, the National League North, meaning that Wolverhampton Wanderers would have to be relegated five times in order for this matchup to be even.

That said, Wolves aren’t exactly the cream of the crop in the Premier League, sitting in 14th place. Intriguingly, the last time Wolves played a non-league team in the FA Cup (in 2013), they lost, falling 0-1 to Luton.

While these odds are prohibitive, they’re about what Manchester City might get against a relegation zone Premier League team.

This is interesting, given that Chorley are so far below the Premier League as to be playing what amounts to a different sport.

The favorites could be underrated in this matchup, but stranger things have happened.

The spread for the match is set at 2.0 goals in favor of Wolves, but there is a bit of shading towards Chorley on this spread.

It wouldn’t be a shock to see this spread sitting around 1.5 goals instead, depending on the sportsbook being used, given the direction the shading is going.

All in all, credit to Chorley, but their miracle run is likely to end here in this matchup.