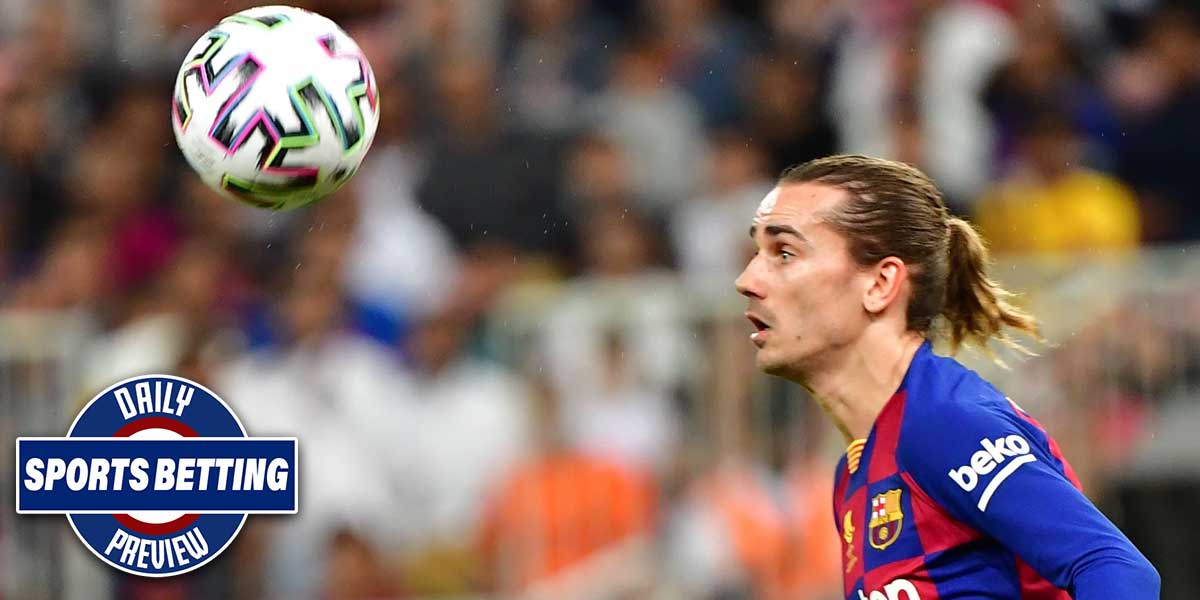 PHOENIX – As is frequently mentioned by sharps everywhere, sports betting never sleeps. On Thursday, the sports betting action begins with some golf at the PGA Phoenix Open in Arizona, then takes a trip around the world for some soccer in Spain courtesy of the Copa Del Rey.

The most attended event in professional golf has arrived – the Phoenix Open kicks off Jan. 30, with the earliest tee times at 9:20 a.m. EST. The Open has a rich tradition, with many spectators tuning in to see the famous 16th hole, one of the easiest holes on the PGA tour, and home to some of the greatest moments in Tour history.

The odds, just before the first tee time, favor Jon Rahm to win it all. Rahm is +650, leading the pack by a significant margin. He is followed by Justin Thomas at +900, Hideki Matsuyama and Webb Simpson at +1400, Rickie Fowler at +1600 and Xander Schauffele at +1800.

Rounding out the top tier of competitors are Bryson DeChambeau, Bubba Watson, Gary Woodland, Matt Kuchar, and Tony Finau, all of whom have +2800 odds to win the Open.

The top three favorites by the betting odds, Rahm, Thomas, and Matsuyama, are one of the featured groups on coverage and kick off at 10 a.m. EST on the No. 10 tee on Thursday, and 2:15 p.m. Friday on the no. 1 tee.

The odds will shift during live play, so bettors will need to hop on their preferred online sportsbook as soon as possible.

The Copa Del Rey is an important tournament in Spanish soccer. The way it works is that, similar to the FA Cup in England, there is an extra-seasonal tournament running concurrently with the season. In Spain, this tournament is called the Copa Del Rey.

There are two Copa Del Rey matchups on Thursday, January 30, 2020. First, Barcelona takes on Leganés at 1 p.m. EST. This lopsided matchup is followed by a very slightly more balanced clash, as Mirandés takes on Sevilla at 3 p.m. These games should be found on any of the top US online sportsbooks.

Barcelona is the team that most readers of this page are most likely to know. They have been a dominant force in the global game for years now, and are only three points back of arch-rivals Real Madrid in La Liga play.

Leganés is in their fourth year in the top flight of Spanish soccer, the Primera Division of La Liga, and are coming off of a top 16 finish in the Copa Del Rey in 2019. A victory against one of the titans of Spain would be talked about for years.

As this article was being written, the spread for the game actually moved on Bovada, from Barcelona -1.5 at -140 to Barcelona -2 at +115. Money appears to be coming in on the heavy favorites.

Mirandés is a second division team, playing in the division below Sevilla. It is a testament only to the power of Barcelona that the line for this game is slightly closer than the line for the previous one.

Mirandés has been successful in the Copa Del Rey before, however. In the 2011-2012 season, they reached the semi-finals and beat three Primera Division teams to do it.

Sevilla has been excellent for the past few years and is currently 3rd in La Liga. They are five points behind Barcelona and eight points behind Real Madrid.

Sevilla has enjoyed a period of general success over the last decade, attempting to progress beyond their status as perennial Europa League contenders and move into the true top flight of Spanish soccer.

Mirandés enter as significant underdogs, +700 on the money line. Sevilla, meanwhile, enjoy -240 favorite status, while a draw clocks in at +340.

On the spread, Mirandés +1.5 has -150 odds, while Sevilla -1.5 has +125 odds. Evidently, sports bettors seem to think that Mirandés is relatively likely to cover this spread.

These events are definitely interesting, and certainly deserve the attention of sports bettors across the globe.