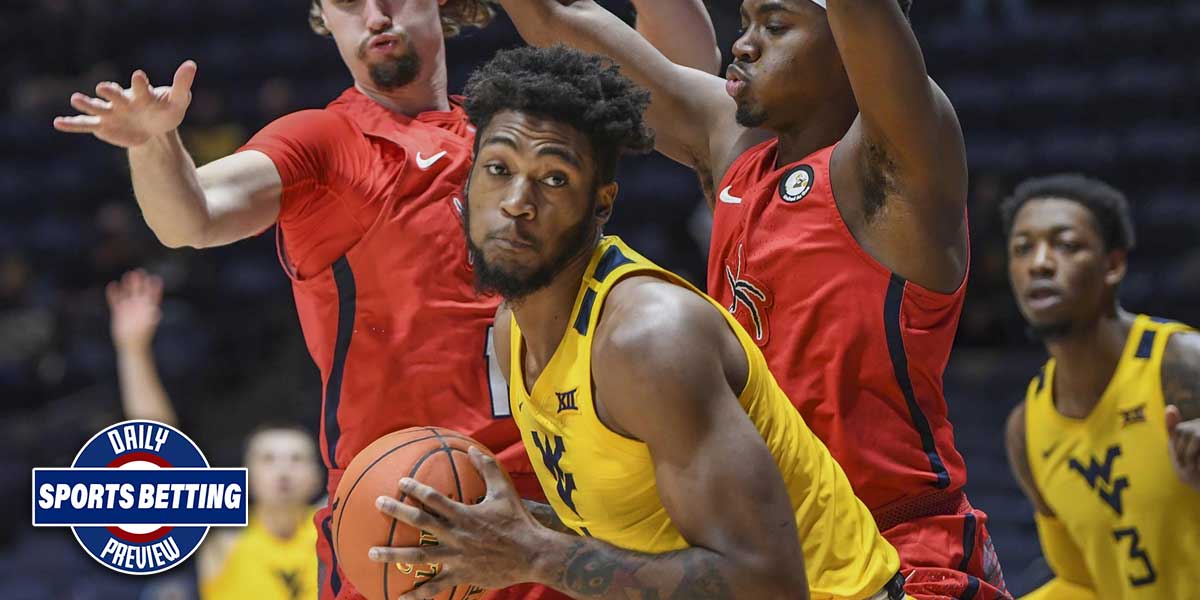 LAS VEGAS - Welcome to the first 2021 edition of the Daily Sports Betting Preview.

The Preview remains unchanged, as it starts out with a look at West Virginia men’s basketball as they take on Oklahoma State.

Then, the Hockey U20 World Championship brings two solid matches to the table today. Finally, in the Premier League, Liverpool takes on Southampton to retain their place at the top of the table.

The eighth-ranked team in college basketball, West Virginia, is set to take on a strong challenger in the form of Oklahoma State.

The matchup looks incredibly close for a ranked vs. non-ranked matchup, so let’s start with the moneyline.

Both teams have odds that are fairly close to even, although West Virginia is projected to come out on top.

Interestingly, West Virginia is favored by 1.5 points on the spread, but their odds only move from -125 to -115 when moving from the spread to the moneyline.

This might mean that by game time, the spread will have moved another half point in their direction.

Oklahoma State is looking like a frisky underdog in this matchup, and the trends bear that out as well. The Cowboys have won their last four games against the spread, which is interesting in a matchup this close.

The 2021 World Junior Ice Hockey Championships is down to the final four, as Russia faces off against Canada while the USA takes on Finland.

Let’s take a look at both of them, as they both project to be exciting, and it’s hard to pick out one as better than the other.

Canada, fresh off of a 3-0 victory against the Czech Republic in the quarterfinals, is a notable favorite in this matchup.

They entered the bracket as the first seed in Group A, and the only team to have 12 points in the group stage. Their group stage was dominant - not only did they rack up the most points, they achieved a +29 goal differential, scoring 33 goals and only allowing four.

Russia, meanwhile, finished second place in Group B, with eight points and a +7 goal differential.

Canada has been absolutely walloping the competition during this tournament, which is what makes them such a favorite at online sportsbooks in this matchup.

The United States finds themselves in much the same position as Canada does - a first seed from the group stage who has been absolutely dominating the competition.

The US is slightly worse than Canada in terms of points achieved and goal differential, but not that much worse.

The US was the first seed out of Group B, and put up nine points in the group stages, while scoring 25 goals and only allowing five for a +20-goal differential. They defeated Slovakia in the quarterfinals 5-2, and now have their sights set on Finland, who were the second seed out of Group A.

Finland racked up nine points, but only had a +8 goal differential in the group stages.

The US is a notable favorite in this matchup, and given these numbers, it’s hard to argue with the hockey oddsmakers on this one.

The Premier League brings a solid matchup to the table as Liverpool takes on Southampton.

Liverpool remains atop the table, although Manchester United have matched them with 33 points. Two successive draws have hurt Liverpool in their bid to win the Premier League once again, and this matchup with Southampton is looking quite important for them.

They are quite favored in their matchup against the ninth-place team, but don’t be fooled - there’s only a seven-point gap between these two teams.

Liverpool are reasonable favorites on the three-way moneyline simply because it is hard to wager against them.

However, -175 odds are not overpowering odds by any means - the outcome of this matchup is genuinely in doubt. The no draw line sees Liverpool as a much larger favorite, of course.

Liverpool vs. Southampton - No Draw

All of that said, Liverpool are coming off of two successive draws against teams they should have beaten.

Three of their last five Premier League matches have ended in draws, and they need to avoid a draw in this matchup if they want to stay atop the table.

The spread for the matchup has Liverpool favored by a goal, which is an interesting spread considering there is no hook. Liverpool -0.5 has -185 odds, and Liverpool -1.5 has +135 odds, for reference.

Overall, this matchup looks quite compelling, and Southampton have a real puncher’s chance in this one.

Line shopping could be a useful tool for those wishing to bet on Liverpool, however, to hedge against their recent performances.

Overall, soccer bettors should be enthused at the chance to wager on such a potentially consequential matchup.