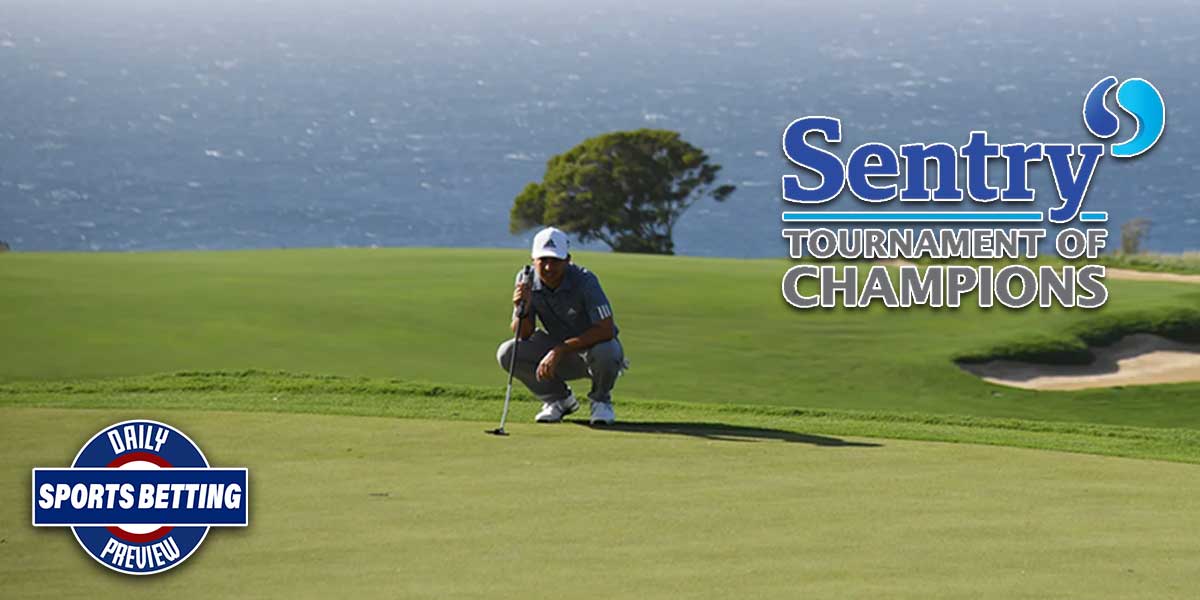 Today’s Preview starts out with a discussion of the PGA’s Sentry Tournament of Champions. Then, the Preview takes a look at some Gonzaga basketball, as the number one team in the nation battles BYU.

Finally, the ATP’s Delray Beach Open is in full swing, and there are a ton of interesting matches to wager on.

The Sentry Tournament Of Champions is a solid PGA event, and in terms of the odds, all the usual suspects are sitting at the top of the boards.

At the top of the odds boards, where he tends to reside, is Dustin Johnson, the number one player on the tour. Johnson’s +600 odds are only challenged by Justin Thomas’ +700 odds, and perhaps by Jon Rahm’s +900 odds.

This trio of Rahm, Thomas and Johnson has dominated the odds boards in the past year.

However, Bryson DeChambeau, who has the fourth shortest odds at +1000, has made quite a name for himself with his power up physique.

DeChambeau’s approach has garnered criticism, but it’s undeniably effective for “The Mad Scientist.”

To greater or lesser degrees, this group is composed of genuine threats to win any tournament, but not exactly favorites by any stretch of the imagination.

The handicappers did their job well when it comes to the odds for this matchup, although perhaps DeChambeau is a bit low.

Regardless, the Sentry Tournament of Champions should be a great opportunity for golf fans and golf betting alike.

College Basketball bettors will have a shot to wager on the number one team in the nation as Gonzaga goes up against BYU.

Gonzaga, ranked number one in both the AP Poll and the Coaches Poll, is expected to have a fairly easy go of it against an unranked BYU.

In fact, it’s a bit of a surprise that there even is a moneyline for this matchup - similarly lopsided matchups have gone without moneylines.

The return on investment for those wagering on Gonzaga is 4.35%, which is not awful in the sense that it only takes a few hours to see that return.

However, there is, of course, the risk of loss. The spread for this matchup is 17 points in favor of Gonzaga.

At the time of writing, the shading on the spread favored Gonzaga, and it is worth noting that if the shading continued to move, the line might move to 17.5 points.

The spread opened at Gonzaga -18.5, so it seems clear that there has been enough action on BYU’s end to move it a bit already.

This matchup should be a solid one for fans of college basketball betting, with multiple approaches available for the risk-averse and the risk takers alike.

Delray Beach plays host to the ATP for an Open tournament this week, and there are some intriguing matches on the betting slate.

Perhaps the most interesting pits Noah Rubin against Roberto Quiroz.

Rubin, at 24 years old, has won four ATP Challenger titles in his pro career, which spans from 2015 until now. Quiroz, meanwhile, is an older player, but about as established as Rubin. Quiroz is 28 years old, but he is still playing for the University of Southern California.

The matchup seems to slightly favor Rubin, who has had far more success on the Challenger level that Quiroz.

Rubin has won four ATP Challenger titles, while Quiroz has lost both of his Challenger level matches as a singles competitor.

The spread is set at one game, which is a very close spread in tennis betting, and the shading on the spread is extremely minor, although it seems set up to offset the points.

This matchup looks to be a great one for tennis bettors, and while Rubin has the advantage in terms of resume, Quiroz looks like he’s right in the match with him.