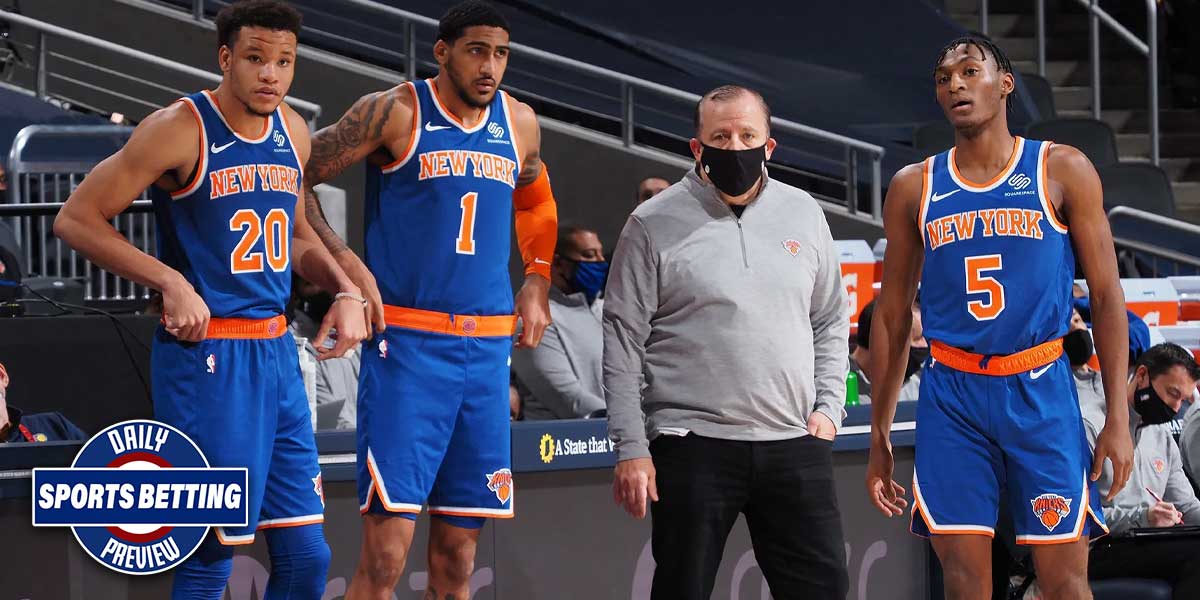 Today’s Preview starts off with a matchup between the Oklahoma City Thunder and the New York Knicks, as the Knicks look to keep their winning ways going.

The New York Knicks are something of a Cinderella story early in the 2021 NBA season.

They’ve been led by Julius Randle and R.J. Barrett, both of whom have been playing typically Thibodeauian amounts of minutes.

This is, in some way, an explanation for why the Knicks are managing to put together these wins - their best players simply play more than anyone else’s best players.

The Knicks' resurgence has taken them all the way to the point that they are now betting favorites against the Oklahoma City Thunder. The Thunder were projected to be the worst team in the Western Conference by the online sportsbooks, with 22.5 wins as their Over/Under line.

In other words, in preseason, the expectations for these teams in terms of O/U lines were identical.

Given that, it would be fair to say that entering the season, the Knicks were expected to be worse than the Thunder by the NBA betting community.

This is no longer true.

Yes, the Knicks are at home. Yes, the Knicks spread is only 2.5 points. All of that is true. What is also true is that the Knicks undeniably look more impressive than expected, and deserve to be favored in this matchup.

Aston Villa have had a surprisingly decent run in the Premier League this season, and currently sit in eighth place.

Villa have racked up eight wins, two draws and five losses, which is a major upgrade from the 2019-2020 season, in which they barely avoided relegation. In fact, Villa only had nine wins all of last season, meaning they are one Premier League win away from equalling last season’s win total.

Unfortunately, they won’t have the chance to get that win today, as they play in the FA Cup against Liverpool.

They won’t have the chance to get that win in multiple contexts: they literally cannot get a PL win, as this is an FA Cup match, but also, they are not going to beat Liverpool anyway.

Liverpool are currently leading the Premier League, and are the second favorites to win the FA Cup, behind Manchester City.

A wager on Liverpool at -1000 odds yields a 10% return, while a wager at -5000 odds yields a 2% return. Meanwhile, Villa have long odds in this matchup, odds nearly as long as their odds to win the FA Cup outright.

Villa is +1500 to win this match, and +2500 to win the whole tournament. This is representative of just how difficult it is to envision them defeating Liverpool.

The odds for Liverpool FA Cup match are quite lopsided, but there are still some decent value plays to be made.

Wilson defeated Judd Trump in the 2020 edition of the tournament, and, over the course of the upcoming months, will seek to defend his title. His matches today are against Matthew Selt (at 1:00 p.m. EST) and Mark Selby (at 2:00 p.m. EST).

Wilson is a -290 favorite on the moneyline, and is significantly advantaged on the spread as well.

Selt +2.5 is a more significant favorite than Wilson is on the moneyline, which is certainly worth noting.

Selby, a much more established name in the world of snooker than Selt, is actually favored over the defending champ.

The juice on this snooker match spread is fairly significant, and Wilson +1.5 is the betting favorite right now at -200. Both of these matches are solid snooker betting opportunities, and well worth keeping an eye on for both fans and bettors.