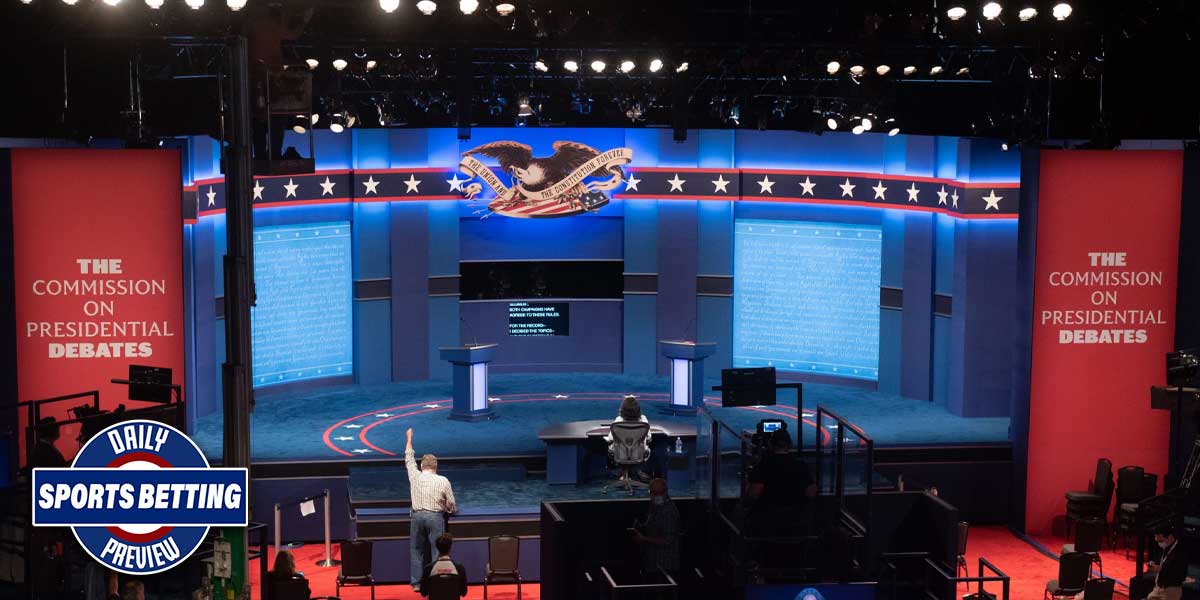 LAS VEGAS - Today’s edition of the Daily Sports Betting Preview might be a bit different than normal.

The final Presidential Debate happens later this evening, and there are plenty of unique wagers on the table. After that, the Preview will take a look at the tennis matchup between David Goffin and Marcos Giron.

Finally, the ZOZO Championship in the PGA brings some solid three ball betting to the table as well.

The final Presidential Debate is set for Thursday evening at 9:00 p.m. EST. The debate will be focused on the differences between the two candidates.

Presidential election betting is a big deal at the online sportsbooks, and the debate means that there will be a lot of off the wall props to take a look at.

Which Event Will Have A Higher Nielsen Rating?

In the ratings contest, the First Presidential Debate is advantaged. One thing to note - ratings are actually down from 2016 so far.

The First Debate was widely regarded as kind of a mess, and the theory here seems to be that it turned people off of watching altogether. Generally, the second and third debates have significantly less viewership than the first one - the novelty wears off quickly.

For example, in 2016, the first debate drew 84 million viewers, but the second and third drew 66.5 and 71.6 million people respectively.

For this reason, the favorite seems like a bit of a lock here.

What will Biden say first?

This is a compelling (political wager, because of these four options, one of them is core to Biden’s messaging, two of them are phrases he commonly uses, and one of them is mostly a joke.

Scranton is core to his official messaging - he’s portraying the race as a contrast between his modest upbringing in Scranton and President Trump’s wealthy childhood.

However, it’s very hard to rule out Joe Biden saying “Malarkey” or “Come On Man.”

Both of them have been core to his identity, but the smart money appears to be on “Scranton”, as it is key to his pitch to voters.

ATP Cologne features several good matchups today, but perhaps the most interesting of them all is the battle between David Goffin and Marcos Giron.

Goffin is an excellent player, an elite talent still near his physical prime, looking to make his mark every single tournament.

He’s currently ranked as the 14th best player in the world, and he has a record of 12-9 so far in 2020. His opponent today, Marcos Giron, is a much lower-ranked player, which makes the odds on the matchup fairly surprising.

The moneyline sees Goffin as a fairly notable favorite, and turning $290 into $390 isn’t exactly an awful rate of return on investment.

The spread might be a better source of value, however.

Goffin is at an advantage on the spread, but even the 3.5-game spread might not do him justice in this matchup.

The spread seems to be moving in the direction of Goffin, with good reason - he should likely be favored more than he is. Tennis bettors will have to figure out which way they think this matchup will go.

The ZOZO Championship kicks off on Thursday, as the PGA continues its weekly schedule.

The Championship provides a great opportunity to focus down on golf betting with three ball action. Let’s take a look at a couple interesting three ball betting opportunities.

The famous Tiger Woods is grouped with Matthew Wolff and Xander Schauffele. Normally, fading a famous player is a good way to get ahead in three ball, but the sportsbooks got there first.

Woods has the longest odds to win this one, with Schauffele at the top of the heap. Schauffele is a top ten golfer, ranked 8th in the chase for the FedEx Cup.

Justin Thomas headlines a star-studded group at +135. Collin Morikawa is next in the group, followed by Patrick Reed.

Thomas is a spectacular competitor, and is currently ranked first in the Official World Golf Rankings. He finished the 2020 season as the number one golfer in the world as well.

Morikawa isn't far behind. He finished 2020 in 5th place, and currently sits at sixth.

This is perhaps the best group for fans of golf to watch - the competition will be at its highest level with these players.

Golf bettors can look at either Thomas or Morikawa as likely winners, and at this group as a group that has been handicapped roughly correctly by the online sportsbooks.