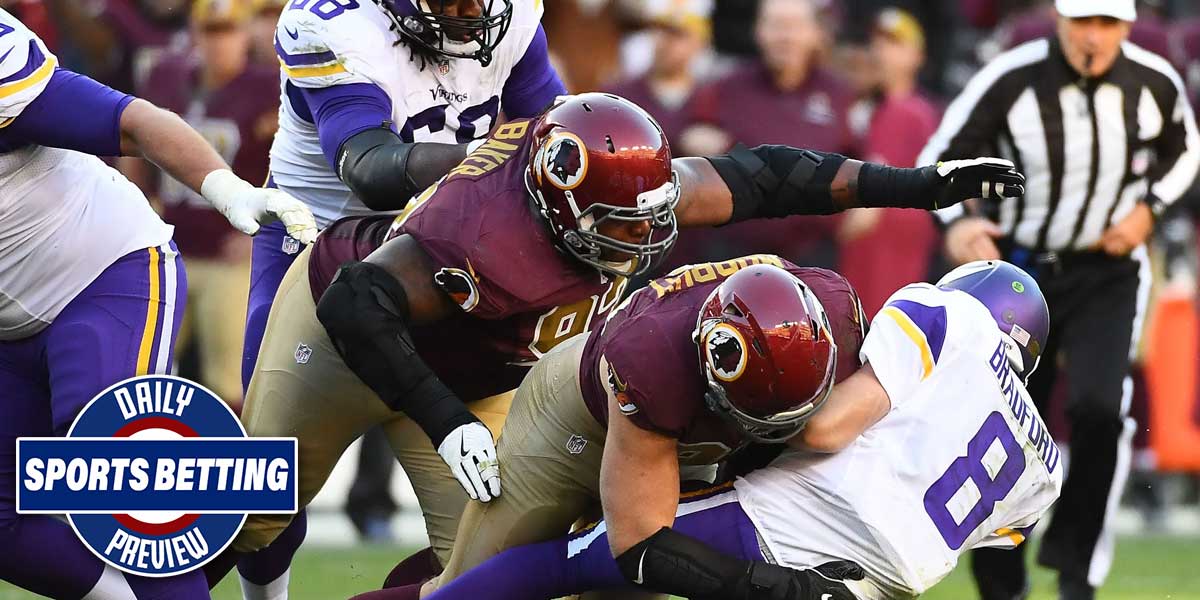 TALLAHASSEE, FLA. – In Week 8 of the NFL, the Thursday Night Football game pits the 1-6 Washington Redskins against the 5-2 Minnesota Vikings.

Quarterbacks Case Keenum and Kirk Cousins are both playing against their former teams, as Cousins replaced Keenum before he left for Denver. Both quarterbacks saw much greater success in Minnesota than in Washington, but Keenum will look to play spoiler against the 16.5 points that the Redskins are underdogs by.

In terms of the total point projection, the over/under for the Reskins and Vikings game is set at 42 points. But in a game that has a storyline focused around the quarterbacks, there are also many prop bets for Thursday Night Football that bettors should consider.

Case Keenum is only averaging 202.2 passing yards per game, averaging 1.5 touchdowns per game. However, this average has been lowered due to the 77-yard performance last week in a wet and rainy game against one of the NFL’s best defenses in the San Francisco 49ers. Additionally, his average takes a hit from the 37-yard performance against the New York Giants in which he left the game early.

In the four other games that Keenum has started, he is averaging 274.75 yards per game, leaving prop bets for the Redskins’ receivers much easier to tackle.

For the rookie sensation Terry McLaurin, oddsmakers are giving no respect to this Ohio State graduate. In every game McLaurin has started alongside Keenum – with the exception of the Niners game – McLaurin has secured at least one touchdown.

McLaurin getting one touchdown against the Vikings (+200) is well worth the risk, no matter how impressive the Vikings’ defense has been.

Another one of Keenum’s targets of note is Paul Richardson. There is no doubt the Redskins expected more out of Richardson this year. Richardson hasn’t caught a pass in the last two games and has only 28 yards combined in the two games before that.

Still, Richardson is slated at 27.5 receiving yards (-110 for over or under) and bettors have the option to bet with the trend or bet against it, expecting him to finally have a breakout game.

As for the other team, the Vikings have been led in receiving yards by Stefon Diggs. With 9 big plays to his name (receptions of 20+ yards), bettors should consider betting the over on Diggs’ longest receptions.

Set at 24.5 yards (-110 for over or under), Diggs could easily catch a deep ball and give bettors an easy payday.

The focus of this game though will likely be on the run game instead of the passing attack. Dalvin Cook has inserted himself at the tail end of the MVP odds, and his 725 rushing yards lead the NFL.

Still, Cook is projected to carry the ball 21 times and bettors should consider taking the under (-110) here. Though a push is possible, Cook has only exceeded 21 carries one time this season and three times total in his 22-game career. One of those games was last week against the Detroit Lions, but let’s play the laws of average.

Cook is also projected to attain 95.5 rushing yards in the game. As Cook has rushed for over 100 yards in five of his last seven games, the over (-110) seems like another safe bet.

US sportsbooks always post odds on what the highest-scoring quarter will be. Because of the notion to want to beat the clock and score before halftime or the end of the game, the odds for the second and fourth quarter to be the highest-scoring are always with the worst odds.

Instead, bettors should look to take a chance on the first or third quarter as the highest-scoring one for TNF.

However, by shopping lines, bettors can actually increase their payout on this wager even further. The odds above were listed from SportsBetting, but the same bet at Bovada displays odds of the first quarter (+600) and third quarter (+500) being much better.

This game isn’t projected to be too high scoring, so it shouldn’t take much to be listed as the high scoring quarter. In fact, those who think a quarter will result in zero points should look at taking a risk on there being a scoreless quarter (+190).

Whichever bet or bets are taken, just remember to get those wagers in before 8:20 p.m. EST when Thursday Night Football kicks off on FOX.