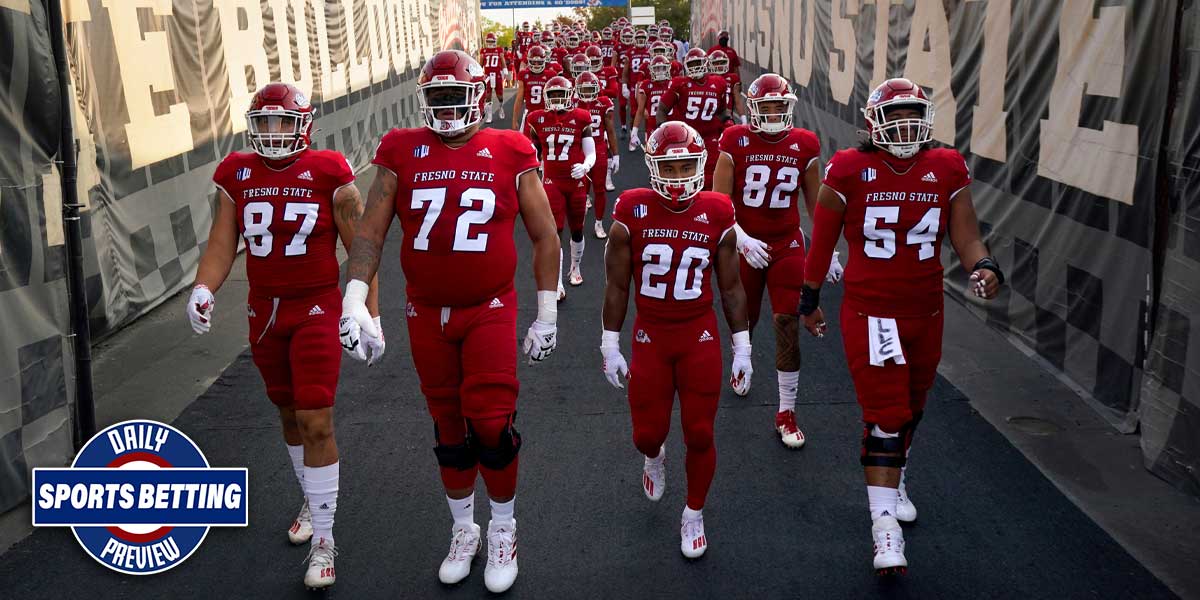 LAS VEGAS - Today’s Daily Sports Betting Preview looks at three of the most compelling sports betting events of the day.

First, in NCAA college football, Colorado State takes on Fresno State in Thursday night action. Then, in the world of golf, the Bermuda Championship 2020 is up and running, and the odds are ever-changing on the sportsbooks.

Finally, in the UEFA Europa League, Real Sociedad faces off against Napoli in a truly even matchup.

Colorado State travels to Fresno State’s turf for a matchup that is predicted to be closely contested on both the spread and the moneyline.

One aspect of this match that is well worth examining - CSU has played zero games so far this season, while Fresno State has only played one - which they lost.

In other words, a lot of the betting on this game is going to be expectations based, and that could be an explanation for why the moneyline and the spread are so safe.

There are some historical trends that could end up being influential on the outcome of this matchup.

In their last five games as a favorite, Colorado State are 5-0 against the spread. However, running directly counter to that trend is the fact that Fresno State is a whopping 9-1-1 ATS as a home underdog in their last 11 games as such.

That is a stat that is specific to them being home underdogs however - which they are today - but it’s worth noting that in their last four home matchups, Fresno State have not covered the spread once.

The spread on this matchup will vary depending on the sportsbook a given college football betting player decides to use.

It is always important to find the best odds on the wager that one wants to make.

The Bermuda Championship is underway, and the live odds boards are jumping around as results roll in.

At the time of writing, the leader on the live odds boards is Doc Redman, who sits with +750 odds.

Redman has crushed the first eight holes, opening up a one stroke lead over the field at -5.

Will Zalatoris, opened as the favorite in the tournament, is still near the top with +2500 odds.

Zalatoris has a score of -1 through 10 rounds - not where he was expected to end up.

Meanwhile, there are also wagers on who will be the leader at the end of Round 1 - a category which Redman dominates.

Through eight holes, Redman is -5, which puts him in the lead already, and gives him +150 odds to be the Round 1 leader at the end of the day.

Beyond the live futures odds, bettors can also wager on the head to head bets for matchups that will occur throughout Round 1 as well as throughout the tournament.

This wager pits Chesson Hadley against Rafael Cabrera Bello in a first round matchup - only their scores today will count for this wager.

The wager is a pick ‘em at this point, with both sides having -115 odds to have the better Round 1 score.

Emiliano Grillo is favored to have a better score than Denny McCarthy over the course of the tournament, but not by much.

There are a plethora of wagers on the Bermuda Championship to be found on the online sportsbooks, and golf bettors can pick and choose their favorites.

Napoli and Real Sociedad are set to face off in what the online sportsbooks expect to be an extremely close matchup in the Europa League.

Napoli currently sit in second place on the Serie A table with a 4-0-1 record after finishing in seventh place last year. Real Sociedad, meanwhile, are atop the La Liga table, with a record of 4-2-1, although they have played one more game than second place Real Madrid.

Last year, Sociedad finished in sixth place in La Liga, with a much more pedestrian 16-8-14 record.

On the three way moneyline, Real Sociedad are +140 favorites, while Napoli are close behind with +180 odds to win. A draw seems fairly likely in the matchup, given the relatively equal quality of the teams, with +225 odds.

The introduction of a 0.0 spread on this matchup with some shading on either side complicates wagering.

For example, one could wager on Napoli +110 and have +110 odds should Napoli either win or get a draw.

This is functionally sacrificing profit (Napoli are +180 on the three way moneyline) for safety (a draw is a likely outcome, and it becomes a push on the spread).

In other words, the spread serves as almost an inherent hedge in this matchup - either team on the spread will have worse odds in terms of payout, but get a push in the event of a draw.

Soccer bettors will have to weigh risk against potential profit when picking a wager on this matchup.