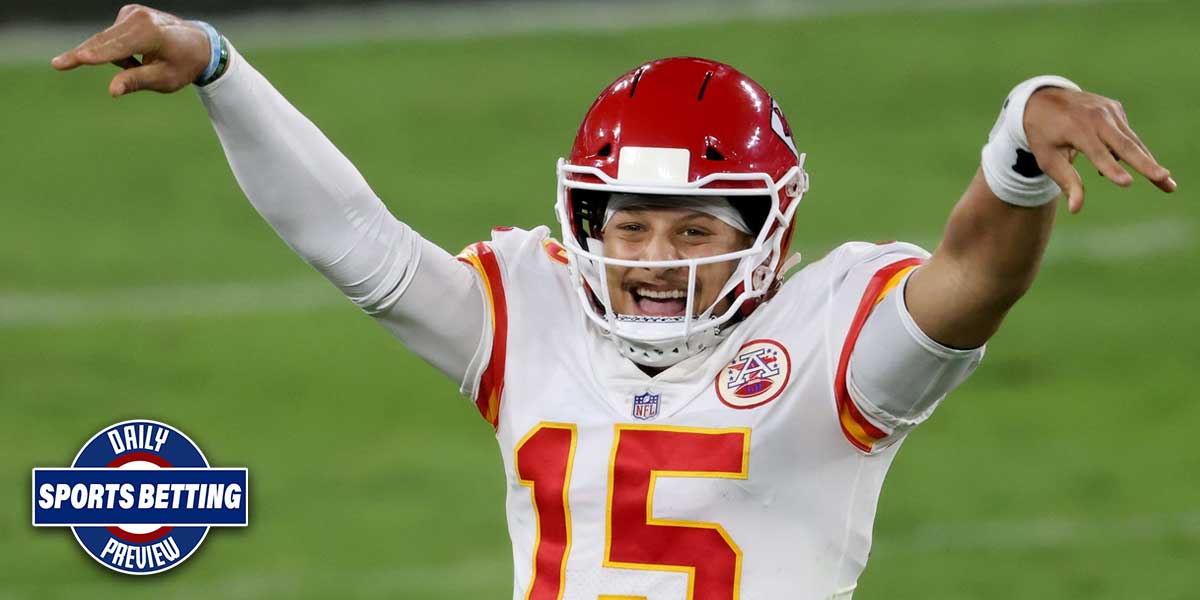 LAS VEGAS - Welcome to today’s edition of the Daily Sports Betting Preview, where three betting opportunities are broken down.

Today’s edition is a bit different than normal, so the Preview will focus on a wagering opportunities on Patrick Mahomes.

After that, the Preview checks out the matchup between Fiona Ferro and Sofia Kenin. Finally, the Preview takes a look at the upcoming BMW PGA Championship.

On Monday, Patrick Mahomes and the Kansas City Chiefs will face off against the New England Patriots.

Normally, the Patriots would be led by Cam Newton, but he tested positive for COVID-19, causing the game to be delayed by a day.

However, no other players tested positive, and the game is set to go on.

Mahomes has been the best quarterback in the league for a few years now, and most agree he could end up being the best of all time at some point.

Let’s check out some prop betting opportunities on Mahomes.

This line is set well. Mahomes has thrown for over 2.5 touchdowns in 10 of his last 20 games. That said, in two of the three games this year, bettors have seen the over hit for Mahomes' touchdowns.

This is another line where the trends historically and the trends this season come into conflict. In the 2019 season, Mahomes completed 27 or more passes in only four of his 17 games played.

However, this season, Mahomes has surpassed 26.5 completions in both of his last two games, and came close in Week 1 with 24 completions.

Now, the last two prop bets could genuinely go either way, however, this last one seems like a very plausible win.

Why? Well, Mahomes has rushed for over 18.5 yards in six of his last seven games played. In addition, the Patriots often play to shut down the greatest strength of the opponent, but when Mahomes is concerned, they can’t shut down everything.

It’s not unreasonable for NFL bettors to expect Mahomes to run for a couple first downs in that context.

Fiona Ferro takes on Sofia Kenin in a matchup that could be one of the best around on today’s French Open slate.

Sofia Kenin is a name that tennis bettors should be intimately familiar with. She’s the 4th seed in this tournament, and the sixth-ranked player in the world.

This round of 16 matchup pits her against Fiona Ferro, who has never made the quarterfinals at the French Open.

Ferro, who has been on a tear recently, won the WTA Palermo event in August, and is coming into this tournament looking like a player that will only move upward in the rankings.

She’s an extremely athletic talent, with the ability to cover a lot of space on the court, and she’s never played better tennis than she is right now.

Meanwhile, Kenin, though undoubtedly higher regarded, has actually had some struggles this season.

Kenin has lost in the first round of four of her last seven major tournaments, and has a mildly positive 9-6 record this season since the Australian Open.

So, what does that tell us about the odds? Well, let’s check them out!

Fiona Ferro is a very slight underdog on the spread, only being spotted one game, while the odds are even on both sides of the spread.

On the moneyline, the difference is also extremely slight, which reflects just how good Ferro has been recently, and just how poor, relatively speaking, Kenin has been.

This matchup looks like an amazing one - a struggling top-flight player against a young up and comer with limitless potential.

The odds are nearly even, and both women have compelling arguments in their favor.

For Kenin, the argument is simply that she is Kenin - she’s the sixth-ranked player in the world, and talent will win out.

For Ferro, the argument is that she’s only ranked lower due to her age and inexperience, and that this is the kind of match that will vault her up the rankings.

Either way, it should be an excellent one.

Just as a little quick hit here at the end of the article, the BMW PGA Championship odds are already up at the major online sportsbooks.

This is a valuable time to wager for golf bettors because the odds haven’t had much time to settle yet.

What this means, in practice, is that nobody has odds below +1000 to win this event, which creates some interesting hedging opportunities.

Let’s take a look at some of the expected top performers - according to the odds boards.

At the top of the odds boards, Patrick Reed and Tommy Fleetwood sit with +1000 odds, the shortest odds in the field.

The two are followed by Tyrell Hatton at +1600, as Justin Rose and Matthew Fitzpatrick are joined at +1800.

Rose is an interesting wager at +1800 - he was ranked as the number one golfer in the world as recently as January 2019.

These wagers are interesting because while most of them will not pay off, the odds on them are quite generous, and they can form part of a wagering strategy along with live betting in order to arrive at profit.