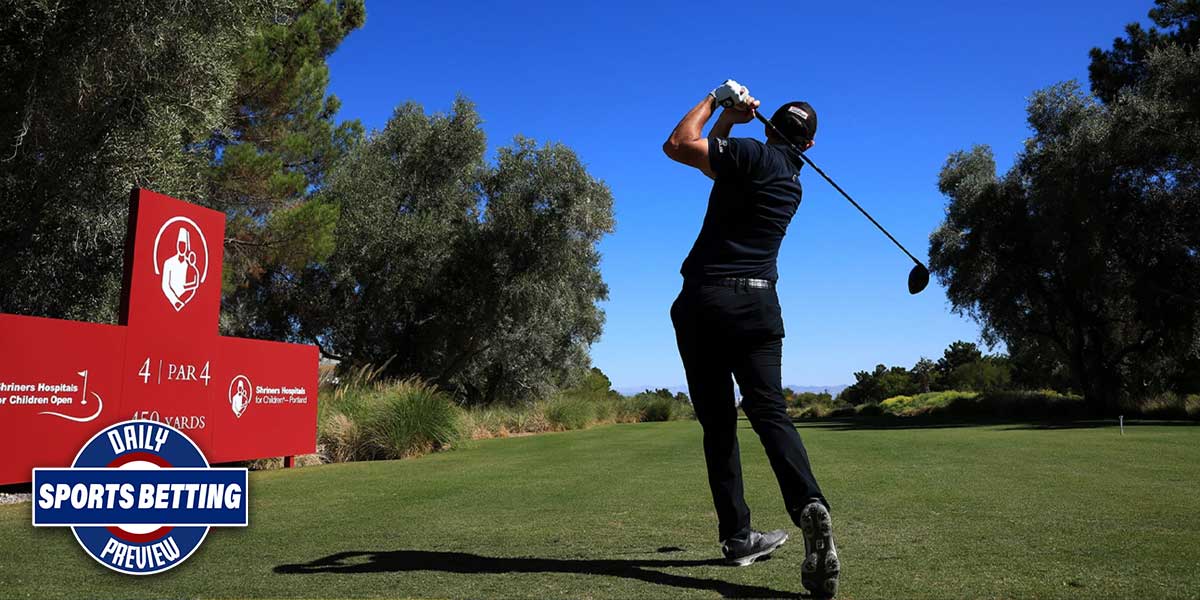 Today’s Preview starts off with an examination of the Game 5 of the ALDS between the New York Yankees and the Tampa Bay Rays.

Then, the Preview checks out the odds on the PGA’s Shriners Hospitals For Children Open.

Finally, the Preview takes a look at the French Open semifinal matchup between Novak Djokovic and Stefanos Tsitsipas.

The New York Yankees managed to force a Game 5 against the Tampa Bay Rays with a victory on Thursday evening. The Yankees went down 2-1 in the series after winning the first game behind the arm of Gerrit Cole.

Luckily for them, Cole is rested and able to start in this pivotal Game 5 outing. The Yankees are almost always favored when Cole starts.

Today is no exception.

The Yankees are -140 favorites in a 2-2 series, mostly due to Cole’s perceived advantages over Rays starter Tyler Glasnow.

Glasnow, who started Game 2 for the Rays, had an amazingly successful outing, recording ten strikeouts.

The Yankees will need Cole to perform at an incredibly high level if they want to make a deep playoff run.

Friday night’s game will be the first big test of what Cole is as a New York Yankee - his dominance in the regular season was great, but he’s here to help them win a Championship.

To quote Aaron Judge, "This is why we got him...We got him to throw postseason baseball for the Yankees."

This should be one of the most interesting sporting events of the day, a win-or-go-home matchup for both teams, with some truly interesting pitching wrinkles. The Yankees are favored, as they tend to be, but the Rays are truly worthy adversaries, which should keep this one interesting as far as MLB bettors are concerned.

The Shriners Hospitals For Children Open continues today, and things are looking good for US Open winner Bryson DeChambeau.

DeChambeau dominated the US Open with his long range off the tee, and he’s had similar success in this run of the Shriners Hospitals For Children Open.

DeChambeau sits atop the leaderboard after shooting an eye-popping 59 in round one of the tournament.

Naturally, in addition to the leaderboards, he also sits atop the odds boards.

During a tournament, golf odds tend to respond to two major factors. First, the score a player has, and second, the perceived strength of that player.

As the tournament goes on, the score a player has becomes more and more important in determining their odds, as competitors are mathematically eliminated from contention.

Similarly, a player who ticks both boxes (good performance and highly rated) at the top of the odds boards can depress odds for everyone else in the tournament.

That is the role that Bryson DeChambeau is playing right now, with an assist from Patrick Cantlay.

The two are both top level golfers, and DeChambeau sits at -9 after Day 1, while Cantlay is among the group tied for second at -8.

The pedigree of DeChambeau is obvious after his win at the US Open, but he also won this very tournament two years ago, and came in fourth place last year. Between that, his Day 1 performance and his status as the FedEx Cup leader at the moment, it’s no surprise that his odds are as short as they are.

Golf bettors will have to weigh whether or not they think any of the other people in this field can get through DeChambeau to pick up a win.

The odds on everyone else are as long as they are because DeChambeau is in front of them - it’s effectively asking them all to be better than him over the rest of the tournament.

Frankly, that’s hard to do.

The Semifinals of the French Open is set to be played this Friday, as Novak Djokovic faces off against Stefanos Tsitsipas to play the winner of Rafael Nadal’s match against Diego Schwartzman.

Djokovic, one of the most dominant players of all time, is naturally heavily favored, even against the quality play that Tsitsipas can bring to bear.

Savvy tennis bettors will note that Djokovic’s odds are actually shorter than in most of his matchups. It might seem counterintuitive, but for Djokovic, -325 is actually short long odds.

It’s a testament to Tsitsipas that the odds are the way that they are. Djokovic routinely pushes top 10 players in the world into the range of +900 odds.

That said, Novak Djokovic is the most dominant player in the world. He’s won five of the last 10 grand slams, and is looking to make it six of eleven.

He was the betting favorite in the US Open before getting disqualified for accidentally hitting a referee with a tennis ball in frustration.

Tsitsipas, meanwhile, is a much younger player, and this is only his second time in the semifinals of a Grand Slam event.

The spread favors Djokovic by 5.0 games, which might be a bit out of line with the moneyline odds.

There is a bit of shading towards Tsitsipas, which supports the idea that 5 games might be a bit much in terms of a spread given that the moneyline is where it is.

Line shopping could go a long way for tennis bettors in a matchup like this, as various online sportsbooks will have it at different odds.