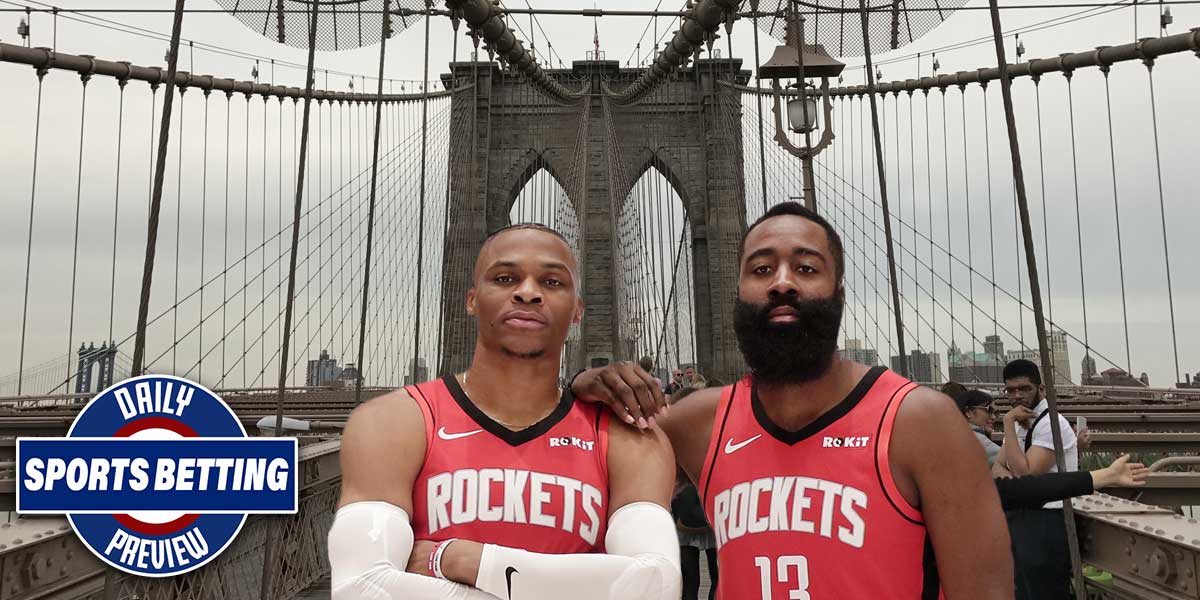 TALLAHASSEE, Fla. – Friday brings loads of betting action from a variety of sports. While the MLB season is over and the NFL is on their two-day break, bettors can turn to betting lines elsewhere.

On Friday, betting odds on the NBA, NHL, Bundesliga, ATP, and MMA show that there is always action to be found at US sportsbooks both online and land-based.

The Battle Of NBA Superstars

With an eight-game NBA slate tonight, one of the games that stands out the most is the Houston Rockets against the Brooklyn Nets. While Kevin Durant won’t be participating all season, this will be the first regular-season game that the trio of Durant, Russell Westbrook, and James Harden will be on the same court since 2012.

This trio played together in Oklahoma City before the Thunder traded away Harden, so expect to hear more about the trio’s history during the broadcast.

The Nets are still led by Kyrie Irving, who is a superstar in himself. If he can manage to keep pace with the Rockets, he could help his home team Nets secure the victory tonight.

The Nets (+160) are underdogs to the Rockets (-180) and the spread is -4.5 in favor of Houston. Whichever way a bettor is leaning, parlaying the spread or moneyline with the under (241.5) might be a wise choice.

This game begins at 7 p.m. EST and can be seen on ESPN.

The reigning NHL champs in the St. Louis Blues have been off to a decent start, as they are currently third in the Central Division. They will host the Columbus Blue Jackets, who have lost their last two and are allowing 3.58 goals per game – the fifth most in the league.

As the Blues (-160) are the favorites in this contest over the Blue Jackets (+145), the smart bettors would be riding with the home team. Those with even more gall might take the risk on the puck line for the Blues (-1.5, +150).

However, the Blue Jackets shoot more shots than 21 other NHL teams and the Blues are near the bottom of the pack in this category. As the over/under is set at 5.5 goals, bettors should stray away from touching this line.

The battle of blue begins at 8 p.m. EST and can be viewed on the local and regional FOX Sports channels.

The Bundesliga is in its tenth matchday, as Hoffenheim takes on last place Paderborn. With a tie for the worst goal differential in the league, Paderborn (+540) is a major underdog against Hoffenheim (-220). A draw is listed at +390.

However, bettors should feel safe taking Hoffenheim in this matchup, as Paderborn is allowing nearly 2.5 goals per game. Hoffenheim’s offense isn’t on par with Bayern or Dortmund, but they can still definitely score easily against their upcoming opponent.

Hoffenheim is -1, -1.5 (-110) on the spread and this may be a cheaper option to take to at least. If the 2-goal differential seems too high, consider taking the under on Paderborn’s goals.

Set at just a half goal, the under (+215) can offer a sizable payout for a team that is averaging basically one goal a game.

A Spaniard Versus A Frenchman In Paris

Turning to the ATP Paris Masters, the quarterfinals are in full swing. There are many fantastic matchups moving forward, but the match to close the night will likely bring the most viewership.

The Spanish World Number 2 in Rafael Nadal will be facing Frenchman Jo-Willie Tsonga in their 14th meeting all-time. Nadal holds a 9-4 advantage over Tsonga but this is truly anyone’s match.

These two have only met twice in the last six years, splitting the meetings, but Nadal got the best of Tsonga at Wimbledon this year, beating him in straight sets. Still, the 22-game projection gives sports bettors an opportunity to take a chance on the under.

As Nadal is favored by 4 games, don’t be surprised if Tsonga covers. However, if Nadal is in his true form, he could beat Tsonga 6-0 in one set, as he has twice before in his career. As this is unlikely though, this matchup should provide great excitement when Nadal (-445) and Tsonga (+375) take the court.

The match begins at 3:50 p.m. EST (or whenever the Shapovalov/Monfils match concludes) and can be streamed on ESPN.

In a showdown between Aaron Vickers and Hector Fajardo at Combate Americas 48, both fighters weighed-in within a pound and a half of each other. With four other fighters missing their weight requirements, this matchup increases its luster and excitement.

Vickers is 3-2 in his MMA career, with all of his wins coming by decision. Fajardo is 2-0 is his early career but has won one by submission and one by decision.

With this, don’t expect either of these fighters to deliver a punishing blow in the early rounds. Taking the over on 2.5 rounds (-175) might be expensive, but it should prove to be worth the odds. Likewise, the smart money is supporting Fajardo (-180) over Vickers (+150), despite Fajardo’s lower Bantamweight ranking.

No matter how this fight plays out, be sure to get in a wager and check it out when it begins at 11:59 p.m. EST on ESPN.