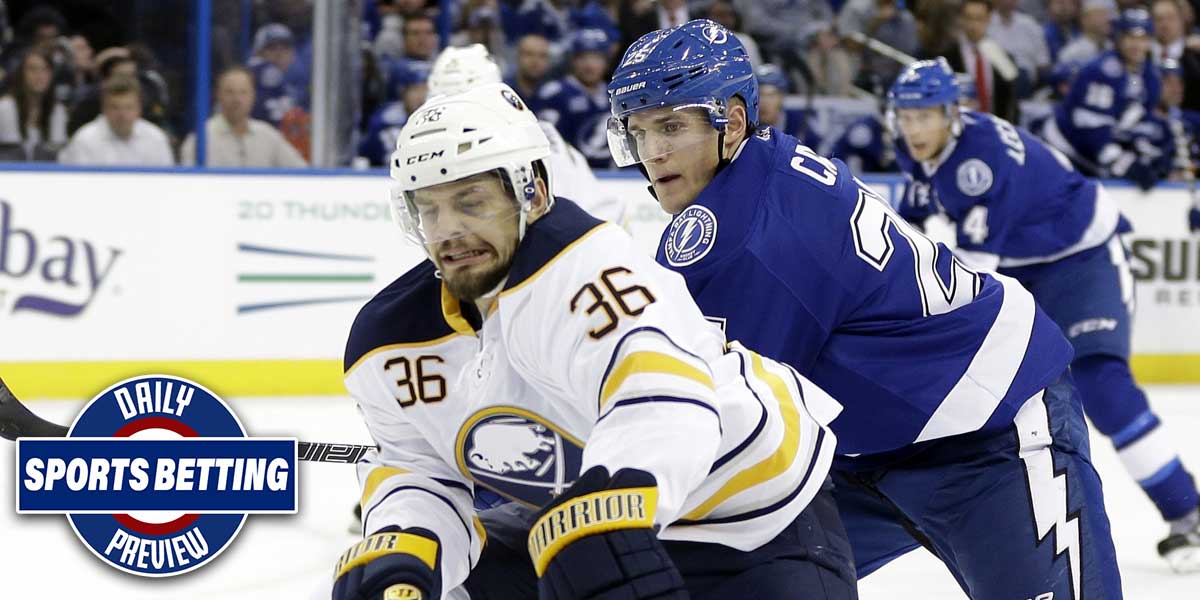 TALLAHASSEE, Fla. – Some of the best sports betting events are those that involve division or conference rivalries. On Friday, three different sports in three different leagues offer bettors an opportunity to wager on a game in which the teams have a storied past.

Not all of the division rivalries are close, as sometimes a favored team goes on long streaks of winning or losing. However, with the amount of data behind the two teams that play each other often, it makes betting on sports much easier.

In an Atlantic Division showdown, the Buffalo Sabres (+144) are underdogs at home against the Tampa Bay Lightning (-160).

This makes perfect sense, as the Lightning have won 16 of the last 20 dating back to 2014. In those 20 matchups, only three required extra time, indicating that taking a chance on the puck line of the Lightning (-1.5, +155) might be worth the risk.

The Lightning have lost two of the last three when playing in Buffalo, but more than half of those 20 matchups would have helped bettors taking the puck line make a profit.

With both teams being 5-4-1 in their last 10, this truly could be anyone’s game. However, as the sharp money is both on the Lightning’s moneyline and puck line, it seems wise to follow suit. The puck drops at 2:05 p.m. EST and can be viewed on NBCS.

The Pacers (-305) are the heavy favorite in this NBA Central Division contest. The Pistons (+255) have been without Blake Griffin for a few games, and US sportsbooks have taken note of that. As 7.5-point underdogs, the Pistons will be on the road relying heavily on Derrick Rose and Andre Drummond.

Keep in mind that just because the Pistons are without Griffin, it doesn’t mean they can’t get the job done. In the two years already played this season between these clubs, the Pistons won both of them.

The over-under is set at 211 points and if this game is like many of their previous matchups, taking the under is advised. In the last 14 matchups dating back to the 2016-2017 season, 212 points or more have been scored in only six of the matchups.

The game begins at 7:05 p.m. EST and can be seen on NBA League Pass or from the local FOX Sports channels in the Indiana and Detroit.

To close the night of divisional rivalries, a PAC-12 North football matchup begins at 10:30 p.m. EST on FS1. The Washington Huskies (-375) will travel south to battle the Oregon State Beavers (+315).

Washington is on a two-game losing streak but both of these losses came against top-8 ranked teams. While both were home losses, the Huskies only lost by a combined nine points, proving they can handle the best of competition.

On the opposite side, the Beavers are on a two-game win streak, which both came on the road. However, when playing Utah three games ago – one of the opponents the Huskies narrowly lost to recently – the Beavers were blown out of the water at home.

With this, the 10.5 points that the sportsbooks are favoring the Huskies by seems rather fair. With 65 points projected for the total, Washington is expected to finish with around 37.5 points, while Oregon State is sitting with just under four touchdowns (27.5).

However, this Pac-12 game plays out, bettors will have a late-night betting option heading into the college football and NFL weekend.