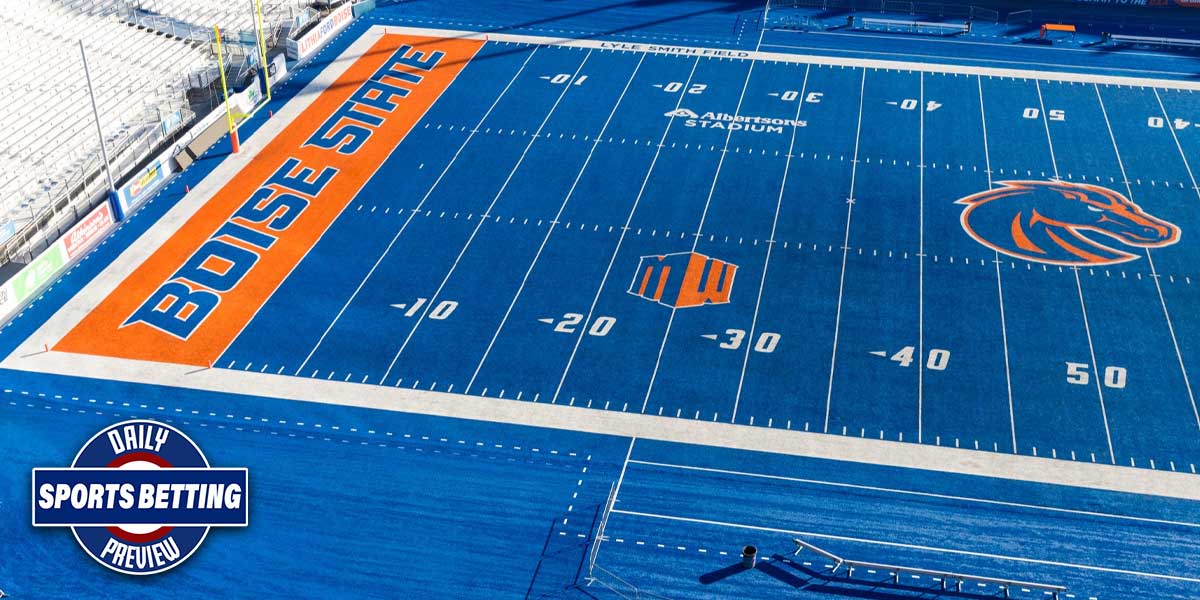 LAS VEGAS - Today’s edition of the Daily Sports Betting Preview kicks off with a bang, and continues in the same vein.

Then, NEST 2020 pits Worlds finalists Suning against Rogue Warriors. Finally, Vasek Pospisil is making a run at ATP Sofia, and today he faces off against John Millman.

Boise State is set to face off against Colorado State in a matchup that could be a useful one for fans of NCAA football wagering.

Boise State are unsurprisingly significantly favored in this matchup, on both the spread and the moneyline.

The moneyline is fairly lopsided, with Boise State having a -600 advantage in terms of odds to win this matchup.

If the moneyline is too chalked for anyone’s taste, the spread could be a better wager - it certainly has a better payout, and Boise State is 5-1 ATS in their last six games as a favorite.

The online sportsbooks offer more wagers than these, however, with prop betting as a common and useful addition to the betting slate.

Let’s take a look at a couple props.

Will either team score 3 unanswered times in the game?

Interestingly, this “trap bet” occurs slightly more than people believe, and in this one, it is favored presumably on the grounds that Colorado State won’t be able to get off the ground.

Will the game go to Overtime?

Overtime is projected to be extremely unlikely due to the difference in quality between the two teams. Boise State is regarded as much better than Colorado State, which makes overtime far less likely.

Along those same lines, Boise State is favored to get the first points of the game, simply by virtue of being expected to be more likely to score on a given drive.

College football bettors have a multitude of wagers to pick from when wagering on this matchup.

NEST 2020 continues in the early morning on Friday, which means esports bettors will want to get their wagers in ASAP.

NEST 2020 is a prestigious League of Legends tournament in China, and features some of the best teams in the world.

Suning is fresh off of a fantastic underdog run at the League of Legends World Championships that saw them make the finals.

One might think that this would make them the second best team in the world, but the sportsbooks do not agree. In fact, the esports betting websites seem to think that Suning are not a high level team in China, let alone on a worldwide stage.

Rogue Warriors are not a particularly highly regarded team in China. In the LPL’s Summer Split, they went 4-12.

So, what’s going on here?

Well, it seems like Suning will not be fielding the roster that dominated the world en route to a Finals appearance.

Instead, they will be playing a roster full of substitute talent - an entirely different team than the one that was expected.

This means that all expectations are out the window - Suning is Suning in name only. This is literally not the team that was so incredible at LoL Worlds.

LoL bettors should make a note of this change before placing any money down thinking they’re getting a deal on an elite team.

Vasek Pospisil will attempt to continue his climb back up the rankings today as he faces off against John Millman in the quarterfinals of ATP Sofia.

Pospisil is under-ranked in the tournament, as a talented player who was out with injury, but is playing quite well.

He may be ranked 74th in the world, but his ranking is inaccurate - it dropped while he was injured, and it hasn’t fully bounced back yet.

Pospisil defeated Jan-Lennard Struff in the previous round of this tournament, a round in which the same dynamics were at play.

The win against Struff was regarded as an upset, but it was an extremely mild one according to the books - Pospisil was only an underdog by +1.0 game.

In this matchup, a lot of the same dynamics are at play - to the world at large, Millman is a favorite - the 38th ranked player in the world taking on the 74th.

However, on the sportsbooks, the matchup is once again extremely close.

Pospisil is actually favored in this matchup after the win against Struff, a player who was both higher ranked and higher-seeded than Millman.

In fact, Pospisil is more favored in this matchup against Millman than Struff was against Pospisil.

The sportsbooks seem to be treating Pospisil as if he’s at his peak, a time in which he was ranked around 25th in the world.

He’s the underdog on paper, but on the tennis sportsbooks, Pospisil is favored against the sixth seed in this tournament.