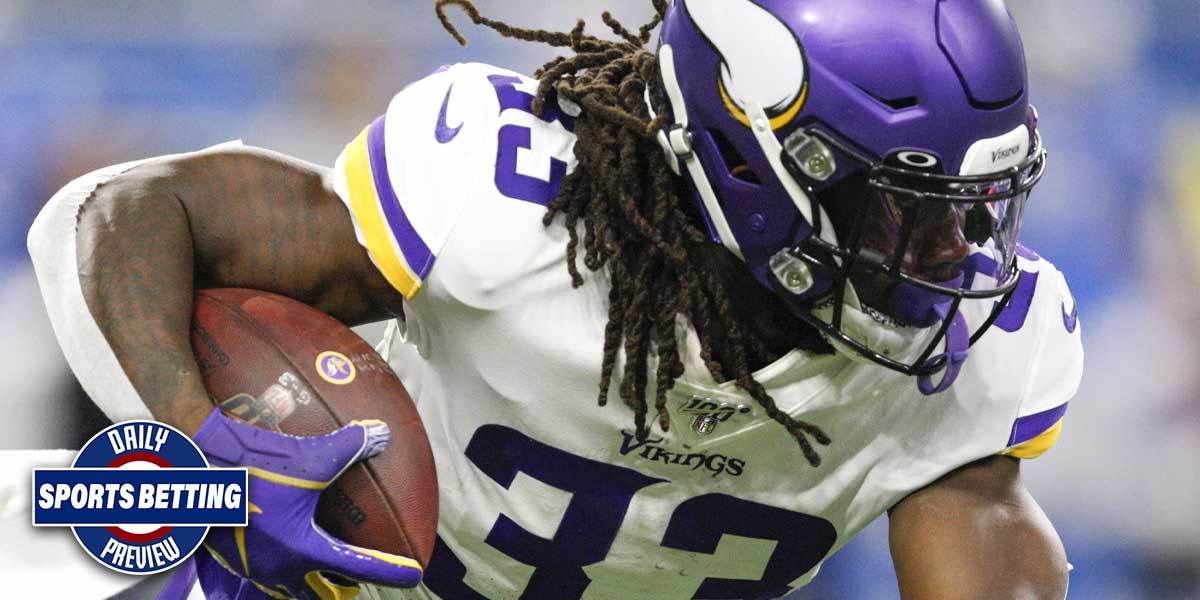 First, the Preview will look at the Monday Night Football matchup between the Minnesota Vikings and the Chicago Bears.

Then, the Preview will dive a bit deeper and check out some of the prop betting opportunities on that matchup. Finally, the ATP World Tour Finals pits Daniil Medvedev against Alexander Zverev, a stunning tennis matchup.

The Bears are the team that enters this matchup with the better record, sitting at 5-4 while the Vikings clock in at 3-5.

However, the sportsbooks are bullish on the Vikings’ chances in this matchup.

The spread on the matchup favors the Vikings by 3.0 points, and the O/U line for the matchup is set at 43.5 points, a remarkably low line.

Let’s take a look at some NFL player props and see if they can help provide more of a full picture of the game.

Minnesota has won its last two games by letting Dalvin Cook loose to do whatever he wants to do.

Cook has been an explosive player in the past, but at this point in his career, he might be reaching peak explosiveness.

In four of the seven games that he has played, Cook has eclipsed 125 yards. In the other three, he didn’t make it above 65.

This makes the wager a fairly interesting one - which Dalvin Cook do people expect to show up tonight? Beyond that, in every one of Minnesota’s wins this season, Cook has put up over 100 yards rushing.

The fortunes of Minnesota as a team are intimately tied to how dominant Cook is on a game to game basis.

Cook is also a threat in the passing game, with over 100 yards through the air in his last two games combined.

In the last three games Cook has played, he has eclipsed that number - sometimes by a lot, sometimes not so much.

However, in his first four games of the season, Cook did not reach that number. This is a bet on form, functionally - if Cook is the same player he has been in the last few weeks, he will be very likely to get more than 20.5 yards.

However, right now, he has only eclipsed that total in three out of seven games this season.

It just so happens that those three games are his most recent three games, and that the Vikings won two of those games.

Finally, let’s touch on the Bears offense, which is certainly struggling. The Bears lost David Montgomery and might end up bringing Lamar Miller into this game.

The sportsbooks are so unsure who will handle the run phase in Chicago’s offense that there are no props on Bears’ players rushing yards.

This means that the game will have to be on the shoulders of QB Nick Foles, so let’s take a look at his passing yards O/U.

Foles has only gone over 265.5 passing yards in two of the seven games he has played this season, although one of those games he didn’t really have the chance as he was substituted for Mitch Trubisky partway through.

However, those two games were his most recent two games - against the Titans and the Saints.

He also came quite close against the Rams, putting up 261 yards in that loss, which was the game before the Saints game.

Basically, the Bears have lost their last three games. When they’re down, Foles has to throw more. The absence of Montgomery will also put more weight on Foles’ arm.

This prop is an interesting one in terms of how it reacts to game flow. If the Bears go up big early, they might turn to the run game regardless of who’s pounding the rock.

That said, the Bears are not favored in this matchup - and Foles might have to let it fly.

Medvedev is ranked fourth in the world, while Zverev clocks in at seventh.

These two faced off at the ATP’s Paris tournament recently, with Medvedev coming out on top in the finals of that event.

The head to head still favors Zverev at 5-2, but the last three matches have been 2-1 in favor of Medvedev.

Zverev defeated Novak Djokovic to win the ATP Finals in 2018, and will be looking for a similar performance here to overcome his rival.

Medvedev started seeing high level success a bit later in his career than Zverev, but he’s seemed to close the gap. Now, it will be up to Medvedev to prove that he’s eclipsed Zverev for good. The sportsbooks favor him in this matchup, but not by much.

Tennis bettors will have to figure out whether to trust the recent results in this matchup or the overall head to head.