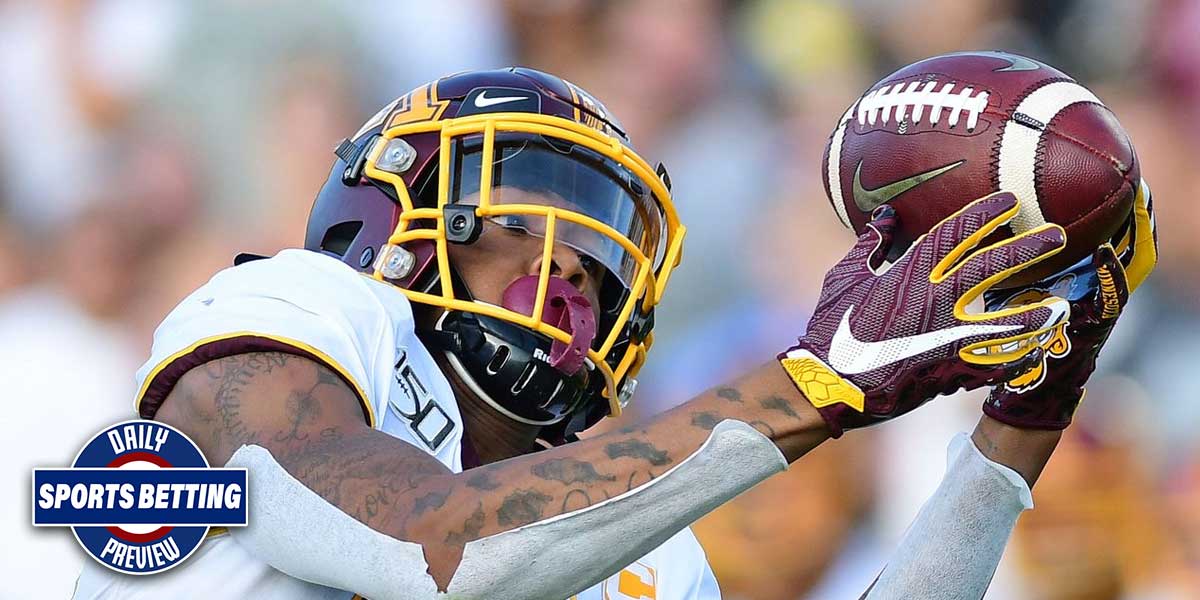 First, in NCAA Football, Purdue takes on Minnesota in a solid matchup from the midwest.

The Minnesota Golden Gophers have had some serious issues winning football games this season.

They enter this game with a 1-3 record on the season, and have been putting in lackluster performances so far. Today, they face off against a Purdue team that has mostly flown under the radar, but enters with a 2-1 record.

Purdue has -120 odds to win the game, while Minnesota is slightly behind them at +100.

The spread is similarly close:

Minnesota have a 1-4 record against the spread in their last five conference games, although they have covered the spread five of seven times against teams with winning records.

This matchup looks to be a close one, but a very high scoring one, with the O/U line set at 61.0 points. The Over is 5-1 in Purdue’s last six games as road favorites, and 4-1 in the last five Minnesota home games.

That said, 61.0 is a very high over, and college football bettors will have to weigh the trends against how high the over is set.

Nashville SC and Inter Miami might not have been expected to make the MLS playoffs - both teams are in their first MLS season - but they face off in the playoffs regardless.

Nashville SC are seventh place in the Eastern Conference, while Inter Miami finished in 10th place. The game will be played at Nashville, which is good news for them - they’ve already defeated Miami under these conditions.

The sportsbooks have clearly picked up on this. The two teams played twice in the regular season, with one draw and one Nashville victory.

So, Nashville enters this game holding the heads up advantage in the matchup, as well as having had a better season.

In addition, several players on the opposing squad will be out with COVID-19, including a minimum of one starting player, per SBI Soccer.

One final consideration is the Draw No Bet line, which simply means that if a draw occurs, the bet is refunded to you - it’s a push.

On that line, Nashville are sitting at -185, as the line moved significantly after the COVID news broke. Given that, soccer betting fans will have to choose between wagering on a straight up Nashville win or a Draw No Bet Nashville win with shorter odds.

Diego Schwartzman’s time at the ATP Finals is effectively done for this year, as he has already fallen to 0-2 in the competition.

Daniil Medvedev, meanwhile, is already 2-0, and will advance from his group into the next stage of the tournament. That said, each player would benefit heavily from winning this matchup, as there is a significant amount of money on the line for the competitors.

There will be a significant amount of money on this matchup’s lines at online tennis sportsbooks as well.

Perhaps unsurprisingly, this is one of the largest gaps in odds that has occurred at this tournament.

Schwartzman’s play so far has not been encouraging, while Medvedev is looking like a serious candidate to win it all. Medvedev has already defeated not only Alexander Zverev, but world number one Novak Djokovic.

With tiebreakers locking him to win the group, Medvedev will now look to defeat Schwartzmann and wrap up a perfect 3-0.

Medvedev is favored on the spread, but the sportsbooks seem more confident in his moneyline odds than his spread odds.

Medvedev, despite being only -4.0 on the spread, is -325 to pull off the win. One explanation could be that the sportsbooks are pretty confident he picks up the win, but not fully confident that he dominates the match.