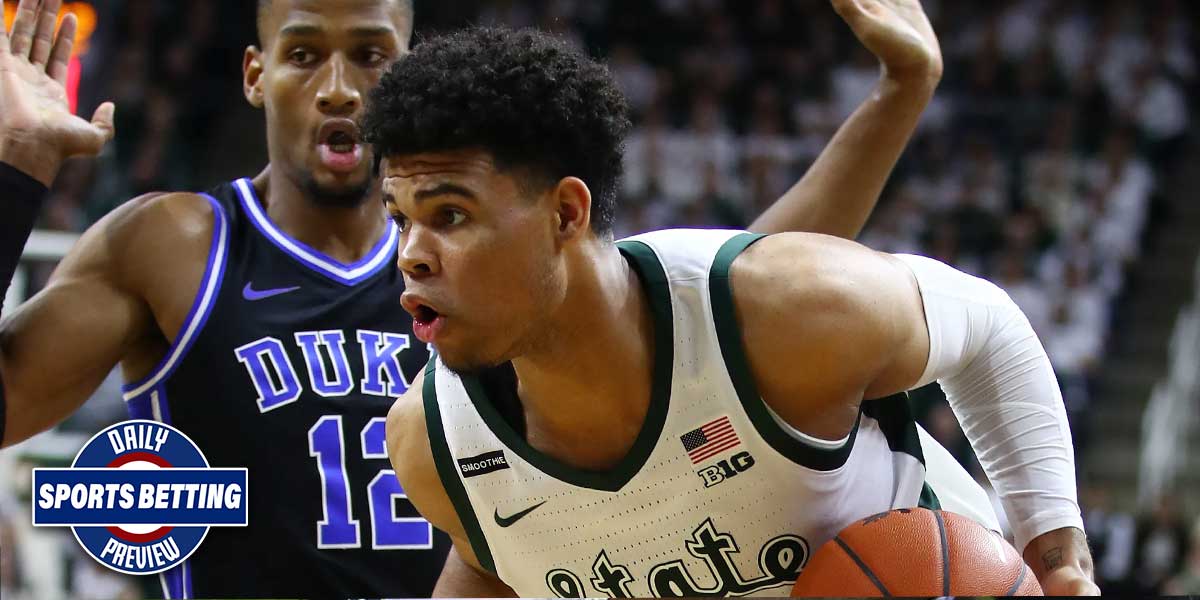 First, in the world of college basketball, elite teams face off as Michigan State meets Duke.

Then, in the MLS Semifinals, the Seattle Sounders battle FC Dallas as mild favorites. Finally, over in Europe, the Dreamhack Masters 2020 CS:GO tournament continues as Heroic faces off against Team Spirit.

The 2020-2021 College Basketball season is new and exciting, with a lot of open possibilities, but one thing is for sure - this matchup is going to be a good one.

Duke enters this game ranked sixth in the nation, while Michigan State is ranked only a few slots below, at eighth.

The matchup seems fairly close on both the moneyline and the spread.

The moneyline reflects a similar situation - Duke is a mild favorite, but not a prohibitive one, and not expected to dominate this game.

The points O/U’s can be fairly revelatory in that they can show college basketball bettors what direction the hook cuts on the spread.

The main information to be gleaned here is that the hook is going the direction of Duke on the spread.

They are expected to have a total three points higher than Michigan State’s, but the spread is set at Duke -3.5.

That extra half point is there for a reason, and it might be indicative that a wager on Michigan State to cover is not out of the question.

The MLS season is almost over. After the big MLS Is Back Tournament, the entire regular season, and the playoffs, it now comes down to four teams.

Two of the four remaining teams face off today, as the Seattle Sounders battle against FC Dallas.

Seattle are big time favorites on the three way moneyline with -155 odds. They have dominated FC Dallas for a while now when playing at home.

FC Dallas has not won a game in Seattle since 2011, which is a fairly astonishing statistic.

Seattle are the far higher seed in this game, entering the playoffs as the second seed while FC Dallas were the sixth seed.

In other words, it’s not exactly a surprise to see them at -155 on the three way moneyline - they dominate this matchup at home, and they’re a better team flat out.

This is the general pattern when moving from the three way moneyline to the no draw moneyline - the favorite gets significantly more favored.

Soccer bettors will have to choose between these two lines - Seattle are very much favored, but whether or not to take the no-draw or the three way line on them is a serious question.

Dreamhack Masters Winter 2020 rolls on today with a matchup that pits Heroic against Team Spirit.

This is a matchup that has a clear favorite, and that favorite has dominated the head to head until very recently.

Heroic are -180 favorites in this matchup, while Team Spirit clocks in with +135 odds as the underdogs.

The two teams have faced off nine times in the past, with Heroic winning eight of those nine matches.

However, the most recent match they played, on June 12th, 2020, Team Spirit pulled off their first head to head victory over Heroic.

Right now, ESL’s rankings have Heroic as the second best team in the entire world, while Spirit are far below them at fifteenth.

They are clearly the favorite in this matchup, and deserve to be, but Spirit are a very reasonable underdog.

If any CS:GO bettors feel the desire to take a risk today, betting on Spirit heads up does not seem like a terrible play to make, given their victory over Heroic in June.