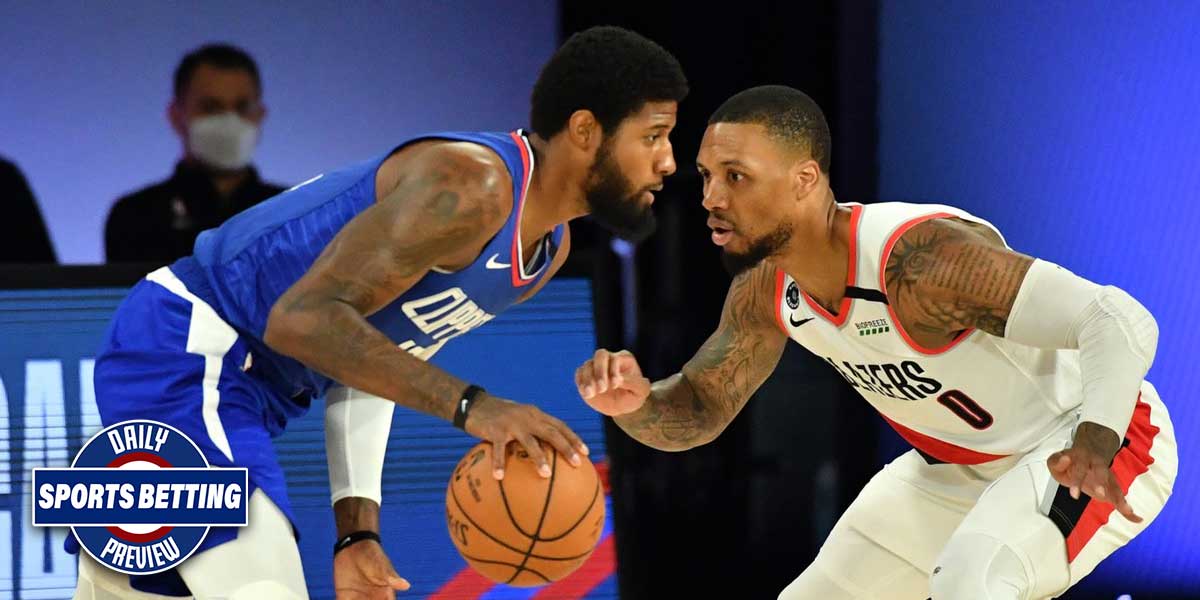 First, in the NBA, the Portland Trail Blazers face off against the Los Angeles Clippers. Then, in the Premier League, Newcastle United gets set to take on league leaders Liverpool. Finally, in Italy’s Serie A3 volleyball competition, there are six matches set to take place on Wednesday afternoon.

The Portland Trail Blazers managed to take down the Los Angeles Lakers a few nights ago, in a game that demonstrated why the Blazers are a stealth WCF candidate. The Blazers were buoyed by a stellar performance from Gary Trent Jr. off the bench, while CJ McCollum and Damian Lillard also did their fair share of the heavy lifting.

The Clippers, meanwhile, are coming off of a solid win against the Minnesota Timberwolves, following a bad loss to the Dallas Mavericks.

Clippers star Kawhi Leonard took an elbow to the face from Serge Ibaka a few days ago, against the Denver Nuggets, and has not played since.

He is currently listed as questionable for this game.

Given that, it’s quite interesting to see the Clippers still favored - perhaps the sportsbooks believe Leonard will play?

The Clippers are playing at home, which could be a part of why they are favored for this game, even if Leonard does not play.

That said, the Blazers are 2-1, with those two wins coming over championship contenders in the Houston Rockets and LA Lakers.

A win over the Clippers could really cement the Blazers as a squad worth watching out for - and make Charles Barkley, who bet $100,000 on them winning the Western Conference Finals, very happy.

The spread for this game is well within the margin that would be provided to a team playing at home.

The Clippers are favored, by only by 1.5 points. This means that NBA bettors would be well advised to pay attention to Leonard’s injury situation. If Kawhi plays, this line might be a solid one for Clippers bettors. If he does not play, it might be worth looking towards the underdogs for this matchup.

Liverpool is in action today after being fought to a 1-1 draw by West Bromwich Albion, a team residing at the bottom of the table.

Liverpool’s performance today could contextualize that game - was it a sign of things to come, or merely a blip in a league winning campaign? On Wednesday, Liverpool once again faces off against a team they should defeat handily in Newcastle United.

While Liverpool remain atop the Premier League table, Newcastle currently sits in 15th place out of the 20 PL teams.

Liverpool are heavy favorites, but the draw against West Brom could put a damper on those expectations. They were even heavier favorites in that matchup, and everyone knows how that went down.

That said, the sportsbooks clearly think it was simply a blip, and not a serious blemish on Liverpool’s dominant record.

Liverpool vs. Newcastle – Bet No Draw

When a potential draw is removed from the equation, Liverpool’s odds to win the matchup reach prohibitive levels.

A wager on Liverpool at -1400 odds yields roughly a 7% return on investment, which is fine for a quick wager, but quite marginal. It’s hard to take any other option, however. Liverpool are who they are - a dominant team in the league, who win games like this constantly.

With the possibility of a draw ruled out, the obvious wager is to take Liverpool on the no draw line, but that is sacrificing potential profit that could be had by taking them on the three-way moneyline. Soccer bettors will have to weigh safety against potential profit when deciding how to wager on this matchup.

Italy’s Serie A3 volleyball league brings six matches to the table today, so let’s go over all of them quickly.

The first aspect of this line that sticks out is that it is even, but the second is how large the vig on this matchup is. Macerata and AVS Mosca Bruno Bolzano may be evenly matched, but the online sportsbooks seem unsure, and are taking a large cut of the action.

This is the day’s most lopsided matchup. Pordenone’s -1400 odds are the only volleyball odds that exceed -1000 in any of these matches.

Though handicapping Italian volleyball may not be for everyone, it still provides an excellent Wednesday betting opportunity.