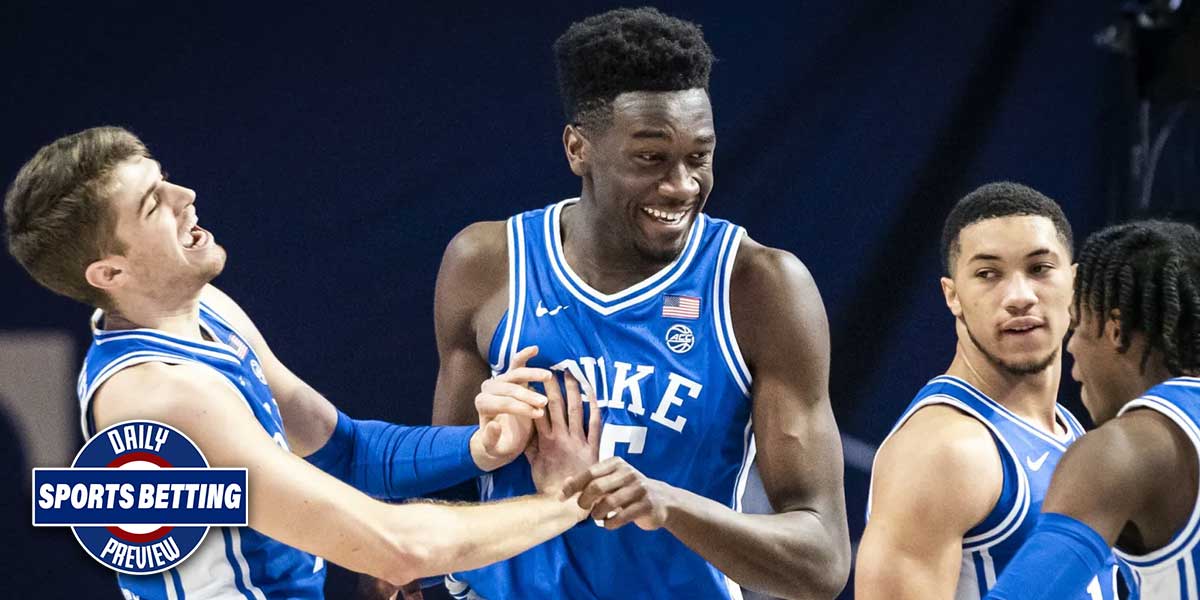 LAS VEGAS - Welcome to this Monday edition of the Daily Sports Betting Preview.

Today’s edition of the Preview kicks off with a look at the NCAA basketball matchup between the Duke Blue Devils and Syracuse Orange. Then, in the NHL, the Vegas Golden Knights take on the Colorado Avalanche.

Duke and Syracuse are having similar season, and not in ways that fans of either team appreciate. Syracuse enters this matchup with a 13-6 record, while Duke is sitting at 10-8, both teams well under expectations.

One way of examining the expectations put on a team is taking a look at that team's record against the spread.

The moneyline could be more appealing to many fans of college basketball betting, as neither team seems to be trustable on the spread.

On the moneyline, Duke is 7-4 at home, while Syracuse is 2-5 on the road, meaning there’s potentially an actionable pattern for NCAA basketball wagerers to examine.

Duke is coming off of a 1 point upset of the No. 7 ranked Virginia Cavilers so the momentum will be on their side coming into the match. Whether or not they can sustain it will be up to live bettors to decide.

The Vegas Golden Knights and the Colorado Avalanche started the season off as two of the favorites to win the 2021 Stanley Cup.

Given the power of both teams involved, it’s not a surprise to see a matchup that is very close on the moneyline, and seems to be determined on the sportsbooks by home/away advantage.

This matchup is well within the area wherein if the home/away teams were reversed, one could imagine the odds flipping the other way.

Both the Golden Knights and the Avalanche currently have +750 odds to win the Stanley Cup this season, near the top of the pack.

It’s hard to differentiate the two, but the Avalanche do have a 5-1 record at home, while the Golden Knights are only 2-2 on the road.

Intriguingly, neither team has a positive record against the puck line, with the Golden Knights at 6-9 and the Avalanche at 6-8.

NHL betting enthusiasts can wager on either of these lines, with varying degrees of risk. The moneyline presents odds close to a pick ‘em, while the puck line offers either greater risk or greater safety, depending on the team chosen.

CS:GO betting has all sorts of tournaments that pop up from time to time, and Snow Sweet Snow #2 is a tournament in the European region that presents several betting opportunities. At 12:00 p.m. EST, SinnerS face off against Copenhagen Flames.

These odds are compelling as Copenhagen Flames are a relatively new team, with not a lot of history with this roster. Despite this, they are ranked 65th in the world by ESL.

In other words, it seems like this matchup should favor SinnerS by a fair bit, and it does, but one wonders if there’s still value to be found in their -240 odds. The two teams have never played before, and while Copenhagen Flames show potential, it seems like SinnerS’ match to lose.

At the same time as this matchup is another matchup, featuring Winstrike vs. HAVU Gaming.

Meanwhile, HLTV ranks Winstrike at 25th in the world, with HAVU not ranked, as HLTV only ranks the top 30 teams. This is a matchup where one might suspect the oddsmakers used the ESL rankings to set the odds.

Winstrike’s -130 odds are intriguing for this reason - they might be more favored than the odds let on.

Esports betting fans can often find potentially advantageous bets due to sportsbooks not knowing everything about smaller sports.